Several weeks ago, Leslie Caviglia, Visalia Deputy City Manager, found an 1858 map of Visalia in storage. Endorsed by E. E. Calhoun, the Tulare County Clerk and Recorder at the time, the map is authentic and I believe it to be the first official Visalia street map. The town was

6 years old at the time it was made. How it has survived all these years is a mystery to me. Although faded, the detail on the map is amazing. Imagine Mill Creek being called Tiber and wide enough to have an island. Notice too, the hand drawn bridge over the Tiber at Bridge and Mill (now Main) streets. Efforts are underway to duplicate and preserve this wonderful piece of Visalia history. Good find Leslie. 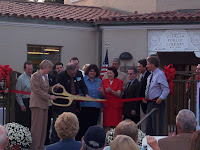 edicated. For many years the building was the pride and joy of the community, but for more than 3 decades it was relegated to storage facility status. It is again the pride and joy of the community! The dream of many was to see it restored and have it serve as a Children’s Library connected to the 1976 library building. Tulare County undertook the restoration project with substantial state funds and donations from individuals and groups alike. It was completed in 2008 and is an example of what a community can do when it is committed to keeping these classic old buildings. Visalia Heritage raised thousands of dollars to help make this project happen, and on their behalf Jane Nash was photographed as she made some appropriate remarks at the ribbon cutting ceremony.

The Togni name has been in Visalia for over a century and up until the last year or so, the name has been part of Visalia’s business landscape since 1921. In that year, Charlie Togni and his brother-in-law Kenneth Branch began Togni Branch Stationary Store. In 1957 the p

artners sold the business to Charlie’s son Greeley, and in 1987 Greeley sold the stationary store to Pete and Dorothy Jungwirth. A couple of years ago, Greeley left Visalia due to health reasons and in 2007, the Togni Branch store closed its doors for good. It was sad to see the Togni name gone from Visalia after being a well known name for so many years here. Greeley passed away on October 22, 2008 in Folsom, California at the age of 86. Interment was at the Visalia Cemetery on October 30th. 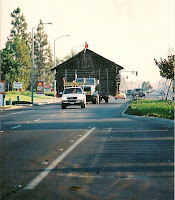 In the 1930s, Visalia Boy Scouts built a log cabin clubhouse on the south bank of Mill Creek near Sierra Vista School. Over the years the old cabin fell into disrepair. Glen Drake, then an employee of the Visalia Unified School District, had a dream to bring it back to its glory days and he enlisted other scout “heavy hitters” to make it happen. The log cabin clubhouse was donated to the scouts and moved down Mooney Blvd. on July 27, 1999 to its new home in Mooney Grove Park. Local professional photographer and historian, Sandy Newman, snapped this once in a lifetime picture as the log cabin is trailored down Mooney Blvd.. On November 8, 2008 at 9:00am the restored log cabin will be dedicated at its new home. Come out and support the scouts and see a fine example of preserving the “old” for future generations to enjoy.

///Did anyone else hear that Mondo is no longer at The Depot Restaurant? Hard to imagine The Depot without Mondo at the front door to greet you.

///Sounds like work is progressing on a plan to connect Visalia and Tulare using the old Santa Fe Railroad route. It’s being called the Santa Fe Trail and I understand it will be open to pedestrians and bicycle traffic and I also understand it will connect to Mooney Grove Park.

///The Visalia Masons recently conducted a Cornerstone dedication program for three Visalia schools – Manuel Hernandez, Annie Mitchell and Cottonwood Creek. Laying cornerstones has been a long tradition for the Masons and I hear they were decked out in full uniform and looked good!

///Regarding the Grubstake drive-in, Peter Cowper, tells us that in the 1960s it was called Ken and Fern’s Grubstake and Art Browning confirmed it. But the last operators of the Grubstake were Walt and Peggy Sanders. The building is still standing, but its days are numbered.


“Young man, be careful how you live. Avoid the unhallowed labyrinths of vice, where the pebbles of sin are polished and the diamond of youth is dimmed.” Visalia Morning Delta, March 27, 1898.
Posted at 9:12 PM 2 comments:
Email ThisBlogThis!Share to TwitterShare to FacebookShare to Pinterest
Topics: Boy Scouts, Grubstake, Library, Maps, Masons, Railroads, Santa Fe Railroad, The Depot, Togni

On October 11, 2008, the Tulare County Historical Society hosted a 38 vehicle caravan retracing the 1858 Butterfield Overland Stage route through Tulare County. The tour finished at the Tulare County Museum at Mooney Grove Park and ended with a bang! An anvil salute was demonstrated to our tour participants and it was the same type of salute that greeted the first stage that came through Visalia in 1858. It was a way for the old timers to celebrate something exciting and it was re-created for us thanks to Bill Bennett. The salute consisted of two 100 pound plus anvils stacked one on top of the other, with black powder in between them. The black power was ignited and the explosion that resulted was thundering as it launched the anvil on the top into the air. Thanks to the photography of Dallas Pattee who captured the moment, we see the results of the explosion. All who witnessed the anvil salute at historic Mooney Grove came away with a great appreciation for the power of black powder. Folks don’t try this at home!

WHO SAID HISTORY IS NOT EXCITING?

A couple of weeks ago I received a call from Visalia native Art Browning. He was very excited and told me he had been reading Jay O’Connell’s latest book Train Robber’s Daughter. As he read the part about the shootout in the 1890s at the Evans place near Houston Ave., he remembered as a young boy he found an old rusted 45-caliber pistol near his home also by Houston Ave. He wondered, “Could that old gun have been connected to Chris Evans or the lawmen hunting them down?” Hum, I wonder!

Susan and Rick Mangini were invited recently to attend a Visalia Heritage meeting and word has it there was lots of excitement in group about doing something in support of the re-creation of the fort. I haven’t heard anything recently about the Fort Visalia block . Anyone hear anything? What’s the status of the sale?

After reading in Historic Happenings some time back about the history of the Visalia Fair Mall, I received an email from Russ Dahler who shared that Visalia’s Gottschalks had the first and only escalator in Tulare County in 1964. He said a visit to it “was a must-do fieldtrip for Visalia Unified Schools.” at the time. Russ worked for Gottschalks at the time and remembers the excitement created around the escalator.

Thanks to Supervisor Phil Cox, County Director of Tourism Eric Coyne, and TulareWorks Supervisor Marlene Cardoza, many of us had a nice guided tour of the old 1935 art deco courthouse building. It contained nice wood trim and features plus beautiful old art deco light fixtures. We all got to see the “secret” old tunnel access door, too. It was a great tour of this neat old solid building

and all the tourists are appreciative of all who made it happen. Recently I received an email from David Weinstein who is a member of the Art Deco Society and he encouraged preservation of the old courthouse as he indicated Ernest Kump, the courthouse architect, was well known and that he was regarded as one of California’s most important architects.

Recently I drove past the old Mearle’s Drive-In and it looked like the glory days at the old eatery. The parking lot was jammed with cars and it looked like they were open for business. But, unfortunately it was not open and was not serving great food. The cars parked in the parking lot were just occupying space, while the drivers were in class at COS. Other than the packed parking lot , not much else seems to be happening there. But the building seems to be aging rather quickly. How long can/should this go on??

I received a couple of emails regarding the precise date that Bill Allen’s book on Michael Mooney will be re-printed and available for purchase. I contacted him recently and he indicated it looks like it will be available for purchase about November 15, 2008, just in time for Christmas. The Tulare County Historical Society will be offering it for sale and when it is available you will be notified in Historic Happenings.

Recently, I drove by the old hamburger stand that was the Grubestake for many years. It looks like the old building is getting ready to be demolished. As you recall it was the hamburger stand on Walnut Ave, just east of Mooney Blvd. The building has been vacant for years, and according to reliable sources, it will be leveled and will be a bare lot until a master plan is developed for the sight. A lot of nostalgia there. Anyone know who last ran this fast food business there? I do.