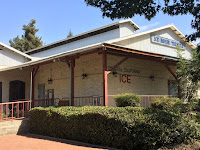 Well, Dorothy Downing is the winner. She was the first to correctly identify the last mystery spot as one of the ice shoots at the old ice plant building now the Ice House
Theater. Nice work Dorothy and again thanks to Kim Gunter for suggesting this as a mystery spot.

Here are your clues for the next one:
1)      This sign is in plain view—not hidden in any way
2)      This 3 link emblem symbolizes that people are bound together
3)      At one time this building was sandwiched between Jasper Harrell’s building and a theater
4)      The 3 initials stand for what “ the organization “ believes are the 3 guiding principals of life.
On what building is this sign located? Good luck.

An Old Transit Center
Bruce Geiger found this neat old photograph of an Orange Belt Stage bus at the Visalia Bus Depot and boy is it nice. It is apparently a 1960 photograph showing the bus at the Greyhound Bus Depot at 211 S. Court Street. During this period of time the location served the community like the transit center does today. 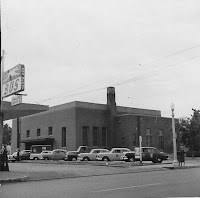 This location was the pickup and drop-off point for Continental Trailways, Greyhound Bus lines, and Orange Belt stages. It  served as a taxi stand as well. The second photo shows on the far left a partial view of the depot and shows its position in downtown Visalia. It was on Court Street just south of the alley behind the Town Center Post Office. Great picture, Bruce. Thanks for sharing it. 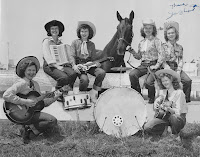 Jean Shepard and Her Visalia Connection
On September 25, 2016, former Visalian and Country Music Hall of Famer, Jean Shepard passed away. Jean and her family came to Visalia from Oklahoma in the early 1940s looking for a better life. The whole family was musically inclined but Jean had the very special voice. All the family members worked in the fields picking fruit around Visalia including Tagus Ranch.  Even Jean did this as a youngster. Jean attended Visalia Senior High School and graduated in 1951. Carl Mathewson was in her class and remembered her wonderful voice especially when she sang at school assemblies. 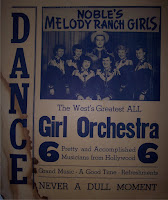 Phil Kneeland also knew the Shepard family and knew early on that Jean was going to be a big country western star. Gary Holder knew Jean’s brother Hoyt and was also familiar with the family. While in high school Jean organized an all girl singing group which later became known as Noble’s Melody Ranch Girls. (Jean can be seen on the far right in both photographs.) When I talked to Jean about the advertising poster shown here and asked about “6 Musicians From Hollywood” she laughed and said they were not from Hollywood and she wasn’t sure how that got there. Jean’s big start began when Hank Thompson heard her sing in 1951. She and her fellow country singer, Ferlin Husky teamed up and their song “A Dear John Letter” made it to the top of the country chart. In 1953 she continued her climb, this time to the Grand Ole Opry and stayed a member until her passing. I had an opportunity to meet Jean in her dressing room at the Opry in 2011 and got to see her perform on stage. Quite a thrill for me.

Speaking of Jean Shepard and her almost royalty status to country music fans, Visalia lays claim to another royal citizen—this one was actual royalty. Eleanor or Nellie Calhoun was born in Visalia in about 1862. Even though she left Visalia with her family for Bakersfield while still a young girl, Visalia still claims her. Nellie had a gift. She was an actor and boy could she act. She was a star in San Francisco and throughout the United States. She toured Europe and became a famous French actress learning to speak French fluently. She eventually married the Prince of Serbia and became Princess Eleanor. Here is a rather poor photograph of her as Dora in the stage play “Diplomacy” in about 1884.  She wrote her memoirs called Pleasures and Palaces. The second photograph was Eleanor at the time the book was published in 1915. 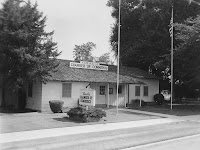 Chamber of Commerce—Over a Century of Promoting Business
The Visalia Chamber of Commerce has been around for a long time. In its early years, it was called the Board of Trade or Improvement Association, but regardless of its name, the group that promotes business in Visalia has always attempted to make the business climate a healthy one. Their  office locations have moved 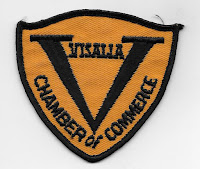 around town over the years. In this photograph the chamber was housed in the old California Highway Patrol office building on the northeast corner of Stevenson and Mineral King. It stayed here for many years, then the building was torn down and the chamber was on the move again. Does anyone recognize this patch? I have had it for many years and need assistance  in identifying what years it was used. Help please! 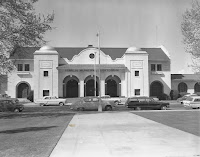 Visalia Municipal Auditorium—A Popular Venue
In 1916, Visalia built a magnificent municipal auditorium large enough to attract conventions and groups of all sizes to town. For nearly 50 years, it  played host to all sorts of events, meetings and activities. In 1963, the building was determined to be unsafe and had to be torn down. During its heyday, it hosted wrestling matches, political rallies, National Guard exercise and so many other events. It had a stage and few, if any, remember the artwork on the main

curtain on the stage. It had a mountain scene in the middle and at the bottom it showed settlers heading west by covered wagon. There were also scenes of what I believe to be Giant Sequoias on either side. Many of these stage curtain paintings were created by well-known artists of the day, but the artist that painted this one remains a mystery. Does anyone know how we can find out?

***If you would like to know more about the historic Estrada’s Restaurant and its years in Visalia, take a look at the September 2016 issue of  Lifestyle Magazine beginning on page 12.

***Richard Drath shared a couple of things that I found interesting and I want to share them with you. He said, “I heard that Marni Nixon recently died. She did the voice over singing for many movie stars, including Audrey Hepburn in My Fair Lady. I wonder if any of your followers remember her singing the lead role of Eliza Doolittle in the COS production of My Fair Lady. I don’t remember what year it was, but it many have been in the early to mid-1960s.”

***Richard also said, “I seem to remember in the mid-50s when the Lucy and Desi movie The Long Long Trailer was shown at the Visalia Theater (not the Fox, the one farther down Main Street) that there was a long, long trailer parked outside the theater that you could walk through after the movie. I’m hoping someone else might remember this and my memory isn’t playing tricks on me.”

***Start thinking about your December calendar. On Monday December 12th as part of the 210 Connect series, I will be doing a presentation that I am calling “Structures, Styles and Stories.” It will be about existing old buildings in Visalia with more information about them. It should be informative, so watch for more details as we get closer.  There will also be some pleasant surprises.

Emigrants are constantly coming into our town and valley. Scarcely a day passes but we can see from one to half a dozen wagon loads of emigrants coming in and passing through. Let them come, we have room to spare for all who desire to come to this, the garden valley of the State. Visalia Weekly Delta, November 24, 1869.
Posted at 9:46 PM 4 comments:
Email ThisBlogThis!Share to TwitterShare to FacebookShare to Pinterest
Newer Posts Older Posts Home
Subscribe to: Posts (Atom)