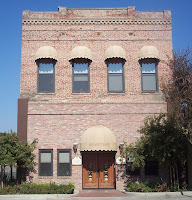 Wow, it’s four in a row for James Hitchcock. He sure knows his architecture. Congratulations again James! The last mystery spot he identified was the Jordan Building built by John F. Jordan in about 1888.  Thanks for all of you who gave it that good ole college try.

Houston Ave
Houston Ave was named for the pioneer Houston family. James Houston came to Visalia about 1860. While here, he and his wife, Frances, had 11 children and reportedly, James was a second cousin to Sam Houston of the “lone star state.”
Annie R. Mitchell – A Nice Reminder

Recently Russ Dahler shared a portion of an old Visalia Times Delta newspaper dated April 15, 1969 in which the reporter at the time, J. C. Hickman (who by the way is a follower of HH), wrote a full page article about local history with an emphasis on Annie R. Mitchell and her contributions. Annie did so much to help us understand and appreciate Visalia's past. Born in 1906 in the now Tulare County ghost town of Tailholt or White River, Annie gave her first local history presentation in 1933. So many people knew her and respected her. In 2000 this Tulare County native, who generously shared so much with us, passed away. J.C. do you remember this full page story and your interview with her? It must have been a memorable conversation.  Thanks for doing it and thanks also to Russ for this old reminder of a great lady. 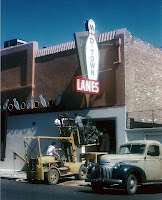 Mid Town Lanes – Bowling on Acequia
Recently, Marian Shippey Cote received some old slides from former Visalian Lloyd Ellis. In the group of slides was a series of Mid Town Lanes bowling alley photographs. Mid Town Lanes was here in 1950s and was located on Acequia just west of where Mid Town News is now. (The corner of Church and Acequia.) This 1959 photo shows what appears to be a remodel/upgrade project  in progress. On the forklift is what I believe to be a new pin setter. The bowling alley/building is gone today; it moved from here to Mooney Blvd. By the way, notice the green parking meter just to the rear of the forklift. Thanks, Lloyd and Marian for sharing.
Fort Visalia, Can You Dig It?

Well, the Fort Visalia story is really out there now. Lots of buzz! The city now owns the site of the birthplace of Visalia. What will happen at this site? What ideas do you have? A fully re-created fort? Only a segment of the fort re-created? A kiosk with an artist rendering of the fort in a courtyard area? Let's hear your ideas and let the creative juices flow. By the way, I think some serious archeology might be in order for the site. This would help us understand how the earlier settlers lived their lives. Are there any archeologists out there? Any of you know an archeologist? 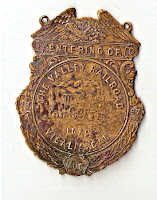 San Francisco & San Joaquin Valley Railroad Arrives – Souvenir Survives
In 1897 Visalia cheered at the arrival of a new railroad that came into town; a railroad that was going to provide competition to the oftentimes hated Southern Pacific.  With a competitive RR, lower rates for both travel and for freight were in store. When the train arrived for the first time in 1897, the biggest crowd ever assembled in Visalia’s history was there to greet it. Many of those in attendance were wearing souvenir pins like this one. Recently, a man found this one while going through his grandfather’s belongings. It’s a great old example of how important this event was to Visalia. By the way, the San Francisco and San Joaquin Valley Railroad soon became the Santa Fe Railroad. As a result, East Street was later changed to Santa Fe Avenue.

Good Old Days  -- Willie Greenlaw
Dana Lubich shared this want ad that he found in the current issue (Nov-Dec 2010) of Good Old Days magazine, a magazine with national circulation. Anyone know anything about this baseball player named William “Willie” K. Greenlaw? According to the ad he played minor league baseball in Visalia in 1958. Good eye Dana, now let's see if we can solve this one.

***Recently I received the biography on Florence Faria, the lady who owned the Visalia sweater that was mentioned in the previous HH posting. She was a long term Visalia area resident and I have a fairly complete history on her.  If you’re at all interested in knowing more about her, let me know.
***Recently I heard from an old friend, Tony Cornett, who shared many of his early Visalia memories with me. One that especially caught my attention was  about Visalia police officer Floyd Depew. Tony first met Floyd as a small child and sadly was on the ambulance that took Floyd to the hospital before he died. Thanks Tony for sharing.
***I recently received an email from Monty Sands who asked about a metal tower that he remembers in the 1940s or early 1950s on Hwy 198. He said in part, “I was just a young boy. The metal tower was east of the airport on the same side of the road.” He said it was there for years. He was just curious if anyone new anything about the tower; he thinks it could have had an advertisement for the gas company on it. Any help would be appreciated.
***In the last HH issue, an old segment of the old freeway 99 was shown and one of readers inquired about the pipe that seemed to stand out near the old roadway. What could that pipe have been used for? Any ideas? A little bit of a mystery here.
***Virginia Strawser is the current chair of the Historic Preservation Advisory Committee for the City of Visalia. They have several vacancies on the committee so anyone interested in historic preservation issues should contact the City of Visalia via their website or contact me and I will connect you with Virginia so she can answer any questions. Looks like a good opportunity here.
***Recently I was contacted by someone who found HH on the internet and she asked about a stable involving her father William Bowen. I was able to find the stable he owned. It was the Palace Stable across the street from where the Fox Theatre is now. The stable would have been there in the late 1800s and early 1900s. She was thrilled to get the information and a photo.
***A few issues ago, I mentioned the Happy Go Lucky Dance Hall in connection with other dance halls in the Visalia area. I have since received an inquiry specifically about the Happy Go Lucky, so if anyone knows anything about it, like location or anything else pertaining to it, I would appreciate the information.

“The Visalia Silver Cornet Band gave the town a serenade on Friday , much to the pleasure of citizens in general. The band has made marked improvement in the few short months it has been organized, and is deserving of much praise. The several pieces played were mastered thoroughly and would be a credit to any band. We congratulate the boys upon their success." Visalia’s Tulare Times, April 14, 1877.
Posted at 7:28 PM No comments:
Email ThisBlogThis!Share to TwitterShare to FacebookShare to Pinterest
Newer Posts Older Posts Home
Subscribe to: Posts (Atom)