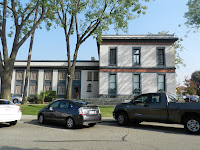 Nice work Karen!. You were the first to get the Mystery Spot. Karen Kirkpatrick correctly identified the old Tulare County jail as the mystery spot. Many got it right, but Karen was the first.

The next one I know will be more difficult so let’s get with it. I’m going to put you to the test. Where is this? Here are your clues:
1)      This image shows emergency stairs that were used to escape from a building in case of fire.
2)      This spot is sandwiched between clothing and sports.
3)      The other side of this building doesn’t look anything like this side.
4)      The roadway that passes under this spot had “shinbone” as part of the roadway’s nickname.
Good luck.

More Visalia Post Office History
Sharon Doughty found another photo of her grandfather, Edmund Kevol Downing, I believe in his official letter carrier uniform. He worked for the Visalia post office from about 1908 to 1940. In 1906, he married Effie Scott. Edmund died on February 21, 1941 at age 57 at his home at 411 So. Watson Street. Thanks Sharon.

Dana Lubich and his mom Tricia were looking through personal effects recently and came upon this brochure of Visalia probably from the 1970s. Great read here. No date on it, but it is early. Any guess as to the year it was published?

Old Main Street Photo Surfaces
While looking through an old photo album that belonged to her late husband Bill, Laura Heberling found this picture, probably taken by Bill through the front windshield of his car in about 1938. Notice the classy street lights, signal light, the two street/sidewalk clocks, the Fox and a number of other familiar businesses. Notice also the decorative pattern on the building on the far right—the pattern is still there—it’s the Starbuck building. This was taken looking west on Main from near Court. By the way, thanks to my daughter Lyndsay for fixing this photo which had a number of major cracks. And thanks to you Laura for the nice old picture.

Famous Auto Comes to Town
Dana Lubich, who supplied this winning photograph for the Visalia Community Bank calendar for the 2012 contest has done some more detective work on this amazing old picture. Dana found out that this fancy car is a custom body (similar to a Cord) on a 1936 Buick Roadmaster Chassis. This car visited Visalia on December 9, 1946 as part of the United Airlines inaugural flight ceremony at the Visalia airport. The famous car had been in the 1937 Cary Grant movie “Topper.” The fancy trailer in this photo held a generator for a sound system. By the way, Dana’s grandfather, Robert Morris, can be seen on the left. Good investigative work, Dana. 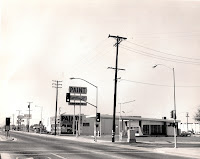 Do You Remember Standard Brands?
Recently Sandy Newman was talking to me about the old Standard Brands Paint Co. that was in the large block building on Mooney Blvd. just south of Beech. I believe it is being refurbished now, but thought I’d share this almost 40-year old photo. Bring back memories? Anybody remembered when Standard Brands closed?

***Gary Holder alerted me to the passing of Jack Feher on December 2, 2011, at the age of 97. Jack was the owner of the auto wrecking and salvage business on East Main Street where Carroll’s Tire shop is today. He had been in Visalia since 1936. Jack and his wife Dorothy had been married for 75 years.
***Maxine Schur is asking for any information on her grandfather Max Wolff. According to Maxine, Max had a dry goods store in the early 1900s, but he was also a “song and dance” man and performed as part of Dale & Doyle. Any information would be appreciated. Sounds like a good story here!
***Sue Gunderman has a question. When she read that the old Copeland Sports building just north of Jack-In-the-Box on Mooney Blvd at Tulare, is going to be a new grocery store, she thought she remembered the site in the 1960s as also being a grocery store. Anybody recall?
***Lindsey Van Deventer needs some help in resolving a family question. She attended Divisadero Middle School in the mid 1990s and her aunt attended Divisadero in the mid 1950s. During Lindsey’s time there, she remembers the school “mascot” was the “Trojans” but her aunt believes it was something different in the 1950s. Can anyone help with this mystery?
***The x-ray machine mentioned by Chriss Courtney Laursen has created quite a lot of memories. Apparently, the x-ray machine was at Cassidy’s Shoe store and Shirley Bridges, Barbara Hinds Joseph, Lynn Brumit, Sheila Caskey Holder, Sally Gerrard Boyne, Frank Pineda, Jan Moffett, Lowell Brown and Eleanor Bergthold all remembered the novelty apparatus at the store. Many people had slipped their feet into the machine to see the amazing view. Some said they thought the x-ray machine dated back to before 1950.
***Mike Hayes has been studying the Tartarville housing situation at what was then the Visalia Junior College. He and his family lived there and found that this form of much needed veteran’s housing was set up in a number of places throughout the United States. He believes that all of it was designed as “temporary” housing.

Patrons who wish to pay their subscription to The Delta in firewood, will please bring it along, before the rain sets in.  Visalia Delta, October 15, 1863
Posted at 7:46 PM No comments:
Email ThisBlogThis!Share to TwitterShare to FacebookShare to Pinterest
Newer Posts Older Posts Home
Subscribe to: Posts (Atom)