Thanks for visiting Historic Happenings! If you are not on the email list yet, and would like to be notified via email when a new posting of this newsletter is made, please email me, Terry Ommen, at histerry@comcast.net. I will add you to the list. 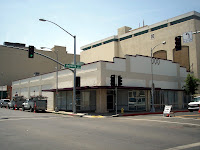 ry Spot Identified—Three Diamonds Building
Four of you found this Visalia mystery spot building. However Virginia Strawser was the first. The building was the old Dodge Bros Auto dealership on the southwest corner of Acequia and Locust streets. She used the meaning of the word Acequia (irrigation canal or waterway) to connect the water clue to this building. It is now being used by Kaweah Delta Hospital. Thanks to all of you, but a special super sleuth medal goes to Virginia.


Robin Fountain Rededication Date Set – Yes, it is True!
Rededication Day has finally arrived. On Saturday, June 13th at 9:00am on the east lawn of the Tulare County Library, the much talked about Carroll Barnes’ Robin Fountain will be rededicated. For background information, scroll dow

n for previous HH postings. Highlights of the short rededication event include two speakers who were actually at the original dedication in 1944, nearly 65 years ago. Janet Loffland Moffett who witnessed the ceremony in the audience and Lynne Sharon Lipscomb Brumit who at 10 years old gave the speech accepting the birdbath on behalf of the children, will both be part of the rededication. Megan Forgey, a talented 12-year old Visalia girl will give Lynne Sharon’s speech and accept the Robin Fountain on behalf of the children of Visalia. Visalia Mayor Jesus Gamboa will formally accept the birdbath on behalf of the city and Carole Firstman, co-founder of First Arts, will provide background information on Carroll Barnes and public art. Everyone is welcome.


Another Gathering of Local Authors – Special Appearance by Bill Coate
Thanks to Jay O’Connell, premier publicist and Tulare County booster and Jon Carlton, heavyhitter and wonder Manager at Visalia’s Costco, Visalia will again host a gathering of l 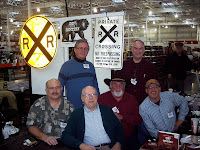 ocal history authors at Costco on June 13, just in time for Fathers Day. This time the famous historian Bill Coate, of Twist in Time fame, will be present. The authors will gather at 11:00am and will be there until 3:00pm. The photo that you see here shows the previous group at the last gathering which took place December 13, 2008. It was a big success. The other authors scheduled to be at Costco with their books on June 13th include: John Bergman, Chris Brewer, Bill Coate, Ron Hughart, Jay O’Connell, and me. For more detail about the authors and their books, please contact me and I can give you more information. This is a great opportunity to meet the authors, get their books and have them signed, right before Father’s Day.


The Visalia & the Yuma, Arizona Connection
Charles “Arizona Charlie” Meadows was born on a ranch near Visalia where he learned to ride, rope and shoot. While still a young man, he moved to Ariz 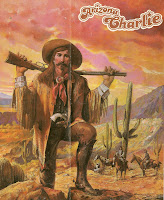 ona with his family where he gained worldwide acclaim as a rodeo star and wild west showman. I have traveled to Payson, Arizona and Dawson City in the Klondike Territory, Canada in pursuit of his story, and I have one more trip to make. As an elderly man, Arizona Charlie moved to Yuma and it was there that he died in 1932. Story has it that he died due to complications of a surgery he performed on himself with a pocket knife. This legendary man, who stood 6’5” tall, was known throughout much of the world and he was a Visalia native son. I will report more upon my return.

ystery Spot – Way Too Easy
I sure hope I don’t insult the intelligence of all of you with this very easy mystery spot. You probably don’t need any clues, but here they are just in case:
1) This is a manmade structure built with Kaiser Steel.
2) It was installed at the tail end of Rock ‘n Roll’s Golden Decade .
3) It is sometimes called a word that rhymes with “wrestle.”
4) It is disappearing from Visalia’s landscape as of this posting.
What and where is it? Don’t all answer at once!

Assorted
{{}} Regarding the possible of the demolition of the 400 block of East Main Street, Charles Loffland commented that he believes people go to Europe to see 200-300-400 year old historic buildings. He said the we will never have [old buildings] if our 50-200 year old buildings are demolished. He concluded, “sometimes the ‘bottom line’ needs to be scrapped to save something special.”

{{}} Bruce Geiger pointed out sometime back and reminded me recently that Visalia had German and Italian sections much like Chinatown. The Italian neighborhood generally was on Santa Fe between Noble and Tulare avenues. The German area was around the little white church that still stands at 724 So. Court Street. At one time, this church was a German Lutheran church. Anyone else have information on Italytown and Germantown in Visalia?

{{}} Patrick Barszcz, who successfully identified the Highland Park mystery spot marker, did more investigative work. He discovered the historic term “manual training”, which is on the marker, is what we would call today “industrial Arts” which would include wood and metal shop.
“Diphtheria still lingers in the county. We know of no cases near Visalia at present, but every few days we hear of the death of children in some part of the county, caused by this terrible disease.” March 7, 1879, Visalia Weekly Delta.


Thanks for visiting Historic Happenings! If you are not on the email list yet and would like to be notified via email when a new posting of this newsletter is made, please email Terry Ommen at histerry@comcast.net. I will add you to the list. 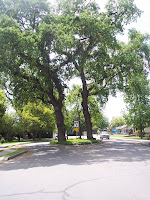 zcz
Patrick Barszcz has once again solved the mystery spot location. The cement marker dated 1914 was placed at Highland Park by Visalia High School Students. A number of you took the “oval” clue and incorrectly guessed Lincoln Oval Park as the location. If you have never seen this tiny oval shaped park, go by and see it and the marker. To get there, take Willis Street to Race, Race to Highland and the park lies between Race and Grove streets. Thanks to all of you who took a stab at it.

phic Record Has Surfaced
In the midst of the Mexican Revolution, Visalia’s Company D, California National Guard, was sent to the Mexican border. The unit spent about 5 months there, and up until now, very few photos have appeared from their camp down there. My good friend, Laura, recently shared with me a family photo album showing her uncle who was stationed with the Visalia unit on the border. Her large collection of photographs will help us understand what it was like for a Visalia soldier stationed on the Mexican border. Company D was stationed there from June to November, 1916, and the photograph here shows her uncle Marvin with Phil Bear, a small black bear captured in Giant Forest and shipped down to Company D as a mascot. 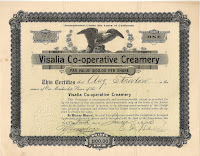 an recently discovered a stock certificate issued for the Visalia Cooperative Creamery. The creamery was organized in 1910 and for years occupied the brick building that is now Arts Visalia across from the Depot Restaurant. The great old building is obviously still standing. The stock certificate is embossed with the corporate seal which is dated April 12, 1910. This is a nice old rare document and Sandy, thanks for preserving this great old piece of Visalia history and sharing it with us.

Local Reporter Dives into the Library Birdbath
J. C. Hickman was a Reporter and eventually became Managing Editor for the Visalia Times Delta in the 1960s and early 1970s. In 1969, when this 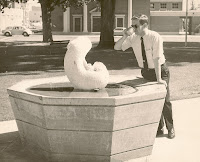 photograph was taken, he had worked hard to get the inoperable Robin Fountain working again. Here he is seen pretending to drink from the fountain. Thanks J. C. getting the fountain to work and for providing the photograph and interesting history to go with it. By the way, the rededication event date for the Robin Fountain has not been set, but hopefully will be soon.

The Next Mystery Spot—Three Diamonds
Are you up for another Mystery Spot? This time, your task is to identify the building on which these three diamonds are located. They are obviously decoration and here are your clu 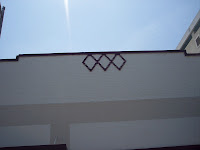 es. Anxious to hear from you. Where is this building?
1) The building once housed an automobile garage and dealership.
2) The brick structure continues to be connected to a service organization that repairs that which is broken.
3) It is located on a street with a strong connection to water.
4) The building was first occupied in 1927.

{{}}The 400 block of E. Main Street has come up again on the radar screen. According to the April 23, 2009 Valley Voice, Craig Mangano said, “It’s a dangerous building, it’s scary, and we don’t see how any of it can be saved. But the City of Visalia will have something to say about that.” I hope the Mangano Co. will consider something other than demolition. We have lost so many of our old buildings. Let’s make history and historic preservation part of the discussion for that historic area of town. (Please scroll down to the November 20, 2008 posting of HH for background on this block.)

{{}} The mysterious post at Main and Liberty continues to get comments. Patrick Barszcz believes, almost without a doubt, that it is an abandoned post office drop box post. Others have said so too. Old paint evidence and other items have convinced him. (Scroll down to the November 20, 2008 HH posting for background information.)