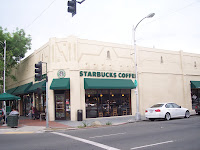 Congratulations Susan! Susan Mangini was the first to identify the mystery spot. It is east wall on the Starbucks building at the corner of Main and Court streets.
Okay, here’s the next one and much easier. The clues are: 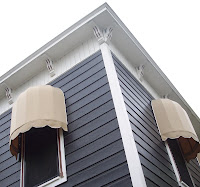 1) It was an early lodging house
2) It was the site of the Andrew Belz Blacksmith Shop
3) The building was built in the 1880s
4) The building is within a stone’s throw of an early hoosegow.
Sequoia Walnut – James L. Parks 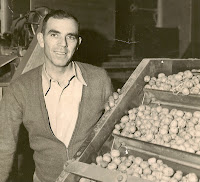 Jim Parks, a former Visalian, shared some early information about his father, James L. Parks, who managed the Sequoia Walnut Growers facility in Visalia at the corner of Goshen and Ben Maddox. Sequoia Walnut started about 1933 and James was the company’s 2nd manager (1934-1973). The Parks family had a ranch at Lovers Lane and Caldwell. Here is Jim’s father as manager. By the way, Jim attended Conyer and Jefferson Schools in Visalia. Thanks Jim for sharing.
Sugar Beet Factory – William Root Chivers 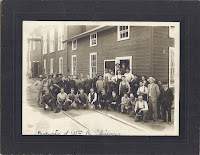 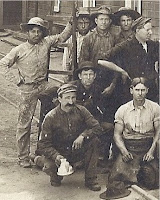 Recently, I heard from Evan Long who while going through family photographs came across this interesting old one. Taken at the Sugar Factory at Visalia, this photograph shows workers there, one of which is Evan’s grandfather, William Root Chivers is the man kneeling at the far left. He’s holding something, but we are unsure what it is. The Sugar Factory was on Santa Fe (notice the tracks) at Tulare Ave or “K” road. It closed in 1919 and the operation moved to Hooper, Utah, Evan believes. Thanks Evans for sharing this great and old photograph.

Mobil Executive Meets Bob Morris – Visalia Airport
Dana Lubich recently looked at the Visalia pictorial history book and surprisingly on page 163, he saw his grandfather unidentified in one of the photos. Robert “Bob” Morris is the man on the left. Bob was apparently meeting with a Mobil executive. Neat old photo, car, and trailer! It was taken at the Visalia Airport.
Oaks Are Disappearing - 1904 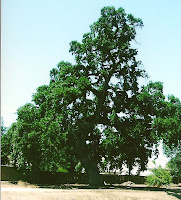 Gilbert Gia, a very good historian and writer from Kern Co., shared a Bakersfield Morning Echo newspaper article from 1904. In part it says, “It is a very sad fact to record that those fine groves of handsome oak trees that nature planted about the country between Tulare and Visalia are being rapidly wiped out by the wood-chopper’s ax. Many of the finest of them have already been reduced to a dreary stretch of stumpage and others are dotted with the white tents of the destroyers. Since the first settlers came to Tulare County, these oak trees have been its chief feature of beauty and attractiveness. They have tempered the weeds in winter and summer. They have been a godsend to the picnicker and the wayfarer and have given the country a picturesque, woodsy and home like appearance in sharp contrast to desert plains both to the north and south.”

John Crenshaw acquired a cover or envelope a couple of years ago. It is dated December 1855 and John said it is the only known manuscript cover from Visalia. Wow, that is rare! It is about 5 ¼” x 3”. J. P. Majors was Visalia’s first postmaster appointed in 1855 and served until 1858. In 1855 about 300 people lived n Visalia. Thanks, John for sharing. Thanks also, Marian, for your research.

Benjamin Dudley, son of the pioneer Tulare County cattleman, Moses Dudley, built the house/mansion at Giddings and Main. Still standing and beautifully restored, the Dudley House was built about 1917. Ben Dudley became a wealthy oil man and was one of the developers of this area (Main just east of Giddings) and it was called Parkside Tract.

***After the last HH and the article about the fallout shelter, many of you shared your stories. It is amazing how many underground shelters honeycomb Visalia.
***Regarding the Dr. Rey story in the last HH, a reader mentioned the registered quarter horse named Joe Pan that the vet had owned. Can you give more detail, MSC?
***Well, it is finally done. The Christ Lutheran Church history book is at Josten’s and should be in our hands by May 12. It is about 200 pages with photographs. It is being done as part of the churches 50th anniversary celebration (1961-2011).
***Former Visalian Bob Goode (1947 Visalia Union High School grad) found HH recently and took a trip down memory lane. He remembered the Sierra Ballroom (where he met his wife to be, Jean Bryant, on St. Patrick’s Day, 1949) and Visalia Police Officer Floyd Depew, who he called “The scourge of high school kids with cars,” were just a couple of topics he shared. He also said that Floyd “pinched me twice for modified mufflers in my 1937 Chevy.” By the way, Bob left Visalia for the California Highway Patrol in 1955 and retired in 1984. Thanks, Bob for returning to Visalia through Historic Happenings.
***Great news! Sounds like the historic Depot Restaurant is going to the Vartanian and Shuklian families. They appreciate the historic nature of the building and I am grateful it is going into such capable hands.

“Judging from the numerous calls for physicians the past week, we should judge that those in attendance at the late camp meeting had more of them caught the chills and fever by camping in the swamp than had obtained forgiveness of their sins.” Visalia Weekly Delta, September 15, 1860.
Posted at 4:09 PM No comments:
Email ThisBlogThis!Share to TwitterShare to FacebookShare to Pinterest
Newer Posts Older Posts Home
Subscribe to: Posts (Atom)