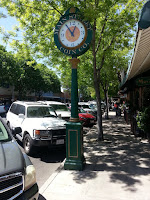 Congratulations go out to many of you who correctly
identified the last mystery spot as the sidewalk clock on Main Street in front of the coin shop at 204 W Main Street, but special congratulations to Stephen Gerrard who was the first to get it right. Nice work, Steve. Ok here is your next one. The clues are:


1) This brick building is very close to the site of the old Mt.

Whitney Power Steam Plant.
2) The building is near “lots” of automobiles
3) It is nearly hidden by vegetation so you have to look closely
4) It is near a street with a name connected to early electricity in Visalia


Where is this building? 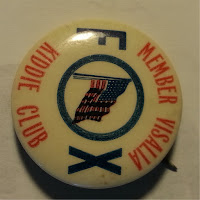 Children have always been an important part of Visalia’s Fox Theatre. Whether it was when they performed on stage, or when
they came for children’s movies, youngsters were always welcome by the theater management. In the old days the theater even created a “Kiddie Club” for the youngsters, and it was a big hit. Guy Shelley shared this official Kiddie Club pin. What a nice keepsake.
Thanks Guy. 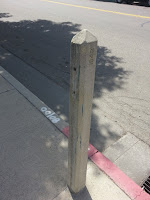 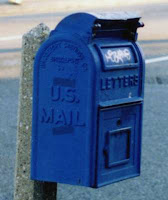 Back in 2008 Joseph Vicenti, a local historian, asked about a strange concrete post that poked up from the sidewalk on the northeast corner of Main and Liberty streets marked 1948. He wondered why it was there. It was a great question. David Miller and a couple of others commented that they thought it was an abandoned post that once held a post office mail collection box. Well, Henry McLaughlin, while perusing the archives of Historic Happenings read about the 2008 question and discussion and went to work. Henry happened to find similar posts in Fresno and eventually solved the mystery when he found this website http://forgotten-ny.com/1999/12/ancient-mailboxes/ Great piece of detective work, Henry. Now it is confirmed! Visalia’s post mystery is now solved for good …it once held a post office box. The Visalia post is the first image shown here.

For some time I have wanted to highlight a man who played an important part in Visalia’s criminal justice history. His name is James S. Clack. He came to Visalia in about 1884. He became an attorney, then justice of the peace for Visalia Township, then police judge and then superior court judge. He married Julia Hinds in 1907 and they lived in Visalia. She passed away in 1955, and the

judge died in 1934. For several years Justice’s Clack’s office was on the ground level floor of the Templars Building (205 N Court across from the courthouse.) On the far left you can see the Justice of the Peace sign hanging down. The building, of course, is now gone. Sorry about the poor quality of the portrait of Judge Clack here, but it’s all I have. If by chance you have one, or know where one can be found, I would appreciate knowing. Thanks.

Cloth Concrete Bag
Speaking of the Visalia Fox Theatre, Guy Shelley who worked in construction in Visalia for many years, also shared an unusual souvenir of the theater that was in the family. When construction for the theater project broke ground in April 1929,much of the building materials were brought in from out

of the area. The Spanish style building used cement or concrete from San Francisco. Hundreds if not thousands of these bags of
cement/concrete were shipped to Visalia by rail. The bags were opened and mixed on the site. The movie house had its grand opening in 1930. Here is a photograph of one of the empty cement bags that was part of the Fox Theatre construction. Thank Guy again for sharing.

Rodeo Buttons Were Everywhere
Rodeos historically have been a part of Visalia life for many years. In the heart of cattle country, Visalia has hosted some of the finest rodeo cowboys competing from throughout the country. For many years the local Moose Club organized the event and made it an annual one, and one to be proud of. Supporters of the different rodeos would buy these buttons and proudly wear them each year. Here is a partial collection showing just a few. I’m convinced that many of these and others are to be found tucked away in jewelry boxes and drawers. They represent some of Visalia’s exciting days. 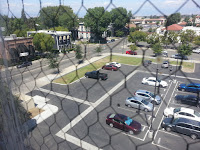 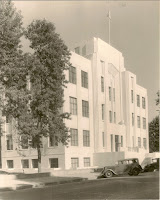 For several years I have heard about a mysterious tunnel that allegedly connected the old Tulare County Jail at Church and Oak Street to the Courthouse (presumed to be the Courthouse Annex) in old Courthouse Square. The Courthouse Annex building continues to stand on Court Street between Center and Oak. The people who I have talked to never actually saw or walked into the tunnel but swear it exists or existed. In each case, they had  heard about it from others. The idea of a tunnel makes sense. Prisoners in the jail could be escorted below ground to the courthouse for their judicial proceedings and therefore the authorities did not have to expose them to the public. A tunnel also could help in preventing escapes. Several people have mentioned that they found what looks like the tunnel opening, now caved in, in the basement of the Courthouse Annex building (note this building was finished in 1935). Recently, Faye Phillips, an employee of the Tulare County Probation Department offered to give us access to the basement, and we found what was purported to be the tunnel opening. My partner in this adventure, Russ Hurley, a prominent Visalia attorney and history buff, accompanied me and he climbed through the relatively small crawl opening leading to what was supposedly the beginning of the tunnel. Once nearby, he took a closer look at the alleged tunnel opening. Although interesting, he and I believe it was not a tunnel, but more than likely a small channel access to utility pipes and wires. But there are still several possible tunnel theories that could be in play here. Can you help?  Have you heard of the tunnel from sources other than me?  Please share if you have. If you have personal knowledge of the tunnel between the jail and the courthouse, I’d appreciate knowing. Also, if you have additional information about this, please share and help solve this mystery. Thanks Faye, for making this tour happen and thanks Russ, for your role as Indiana Jones. 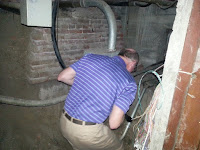 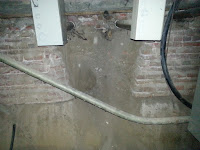 ***If you would like to learn more about the old Spanish style city hall/fire department that was located at Church and Acequia streets, please get a copy of  Lifestyle Magazine, May 2016 edition and go to page 12. You can see photographs and read about it. Or you can go online at https://issuu.com/lifestylemagazine/docs/lifestyle_1605_web
***Thanks, Sheila Caskey Holder for a nice photograph of Frank and Betty Lowe, owners of Commercial Printing at 123 N Court Street. They were important people of the day and it’s nice to have a photo of them.
***By the way, Dorothy Downing found out that Visalia changed to area code 559 on November 14, 1998. Thanks, Dorothy for that tidbit we wondered about.
***Betty Treaster shared a photograph of the Dedication of the Tulare County Historical marker at the old Liberty School that she attended back in 1992. Thanks Betty. By the way Betty was one of the finest Recording Secretaries any organization could ask for. She did it for the Tulare County Historical Society for many years.

Emergency Order Announced in Response to Spanish Influenza Pandemic:
“Now, therefore, it is ordered by the Board of  Trustees of the city of Visalia that every person within or who comes within the city of Visalia during the prevalence of the present epidemic of the influenza shall at all times and places within said city, wear a mask of a design approved by the health officer of said city:  provided, however, that said mask may be removed at all reasonable times for the purpose of eating and drinking and provided, further, that the mask shall not be worn in private homes or private rooms unless a case of influenza shall exist in said place. This order shall be effective immediately. Dated and done this 30th day of October, 1918 at a duly called meeting of said Board of Trustees.” Visalia Daily Times, October 31, 1918
Posted at 7:14 PM 8 comments:
Email ThisBlogThis!Share to TwitterShare to FacebookShare to Pinterest
Newer Posts Older Posts Home
Subscribe to: Posts (Atom)