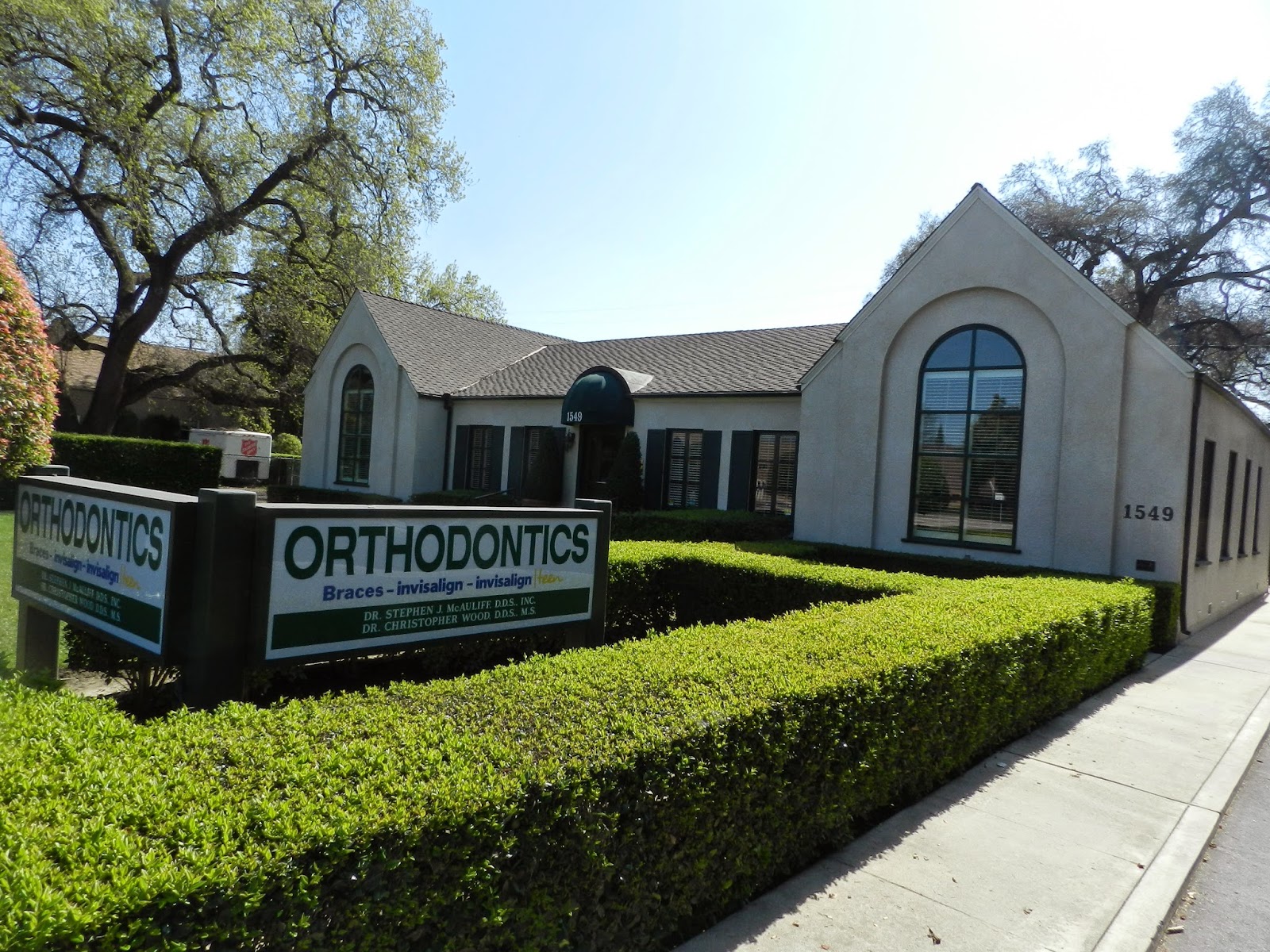 Ok, here is the next one for those of you interested. Here are the clues:


1) At one time it was the only business of its type operating downtown.


3) It has a Main Street address


Where is this building? Good luck!

Pacific Sugar Co.—How Sweet It Was

Recently, Bruce Geiger asked about the Pacific Sugar Co. in Visalia. The company began here in 1905 and for about 10 years it processed sugar beets and had a sizeable workforce. But where was it located? The factory was either at Bridge and Tulare streets or Santa Fe and K Road. Good sources tell me it was located where the Pacific Olive Plant was once located. The problem is, I believe Pacific Olive had locations at both of the above locations. Bruce would like to know where the factory was located and I would too. Can anyone help with this mystery? Thanks Bruce.


When we hear the word "depot" mentioned in Visalia history, we

almost always think about the Southern Pacific Depot, now a restaurant. It's logical as the nearly century old building still stands today.  But Visalia had another depot that was nearly as famous. The Santa Fe Depot was located on the southwest corner of Main and Santa Fe streets and it stood there for decades providing passenger and freight service. The first Santa Fe "through train" came to Visalia in 1900 and 1,000 people were on hand to greet it, although  not at this station. This Santa Fe Depot building came later and was torn down in 1968 to make way for the expanding downtown auto trade. In fact, Arnold Wiebe Buick and Pontiac brought the property. 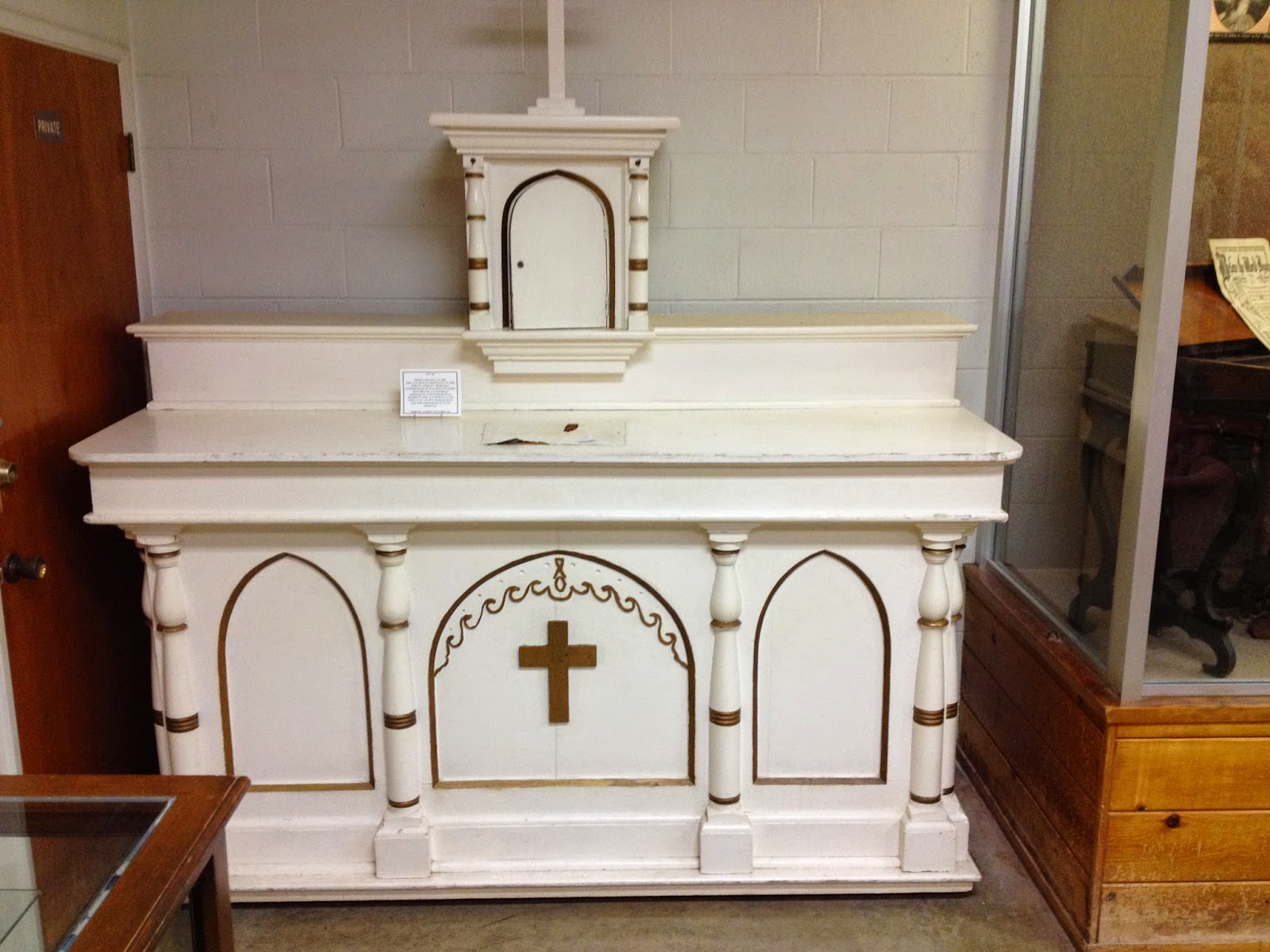 The Altar Adorns the Museum at Mooney Grove


Mary Haven recently brought to my attention an interesting family fact. Her grandfather, John Kotchevar, an immigrant from Austria, built a wooden altar for St. 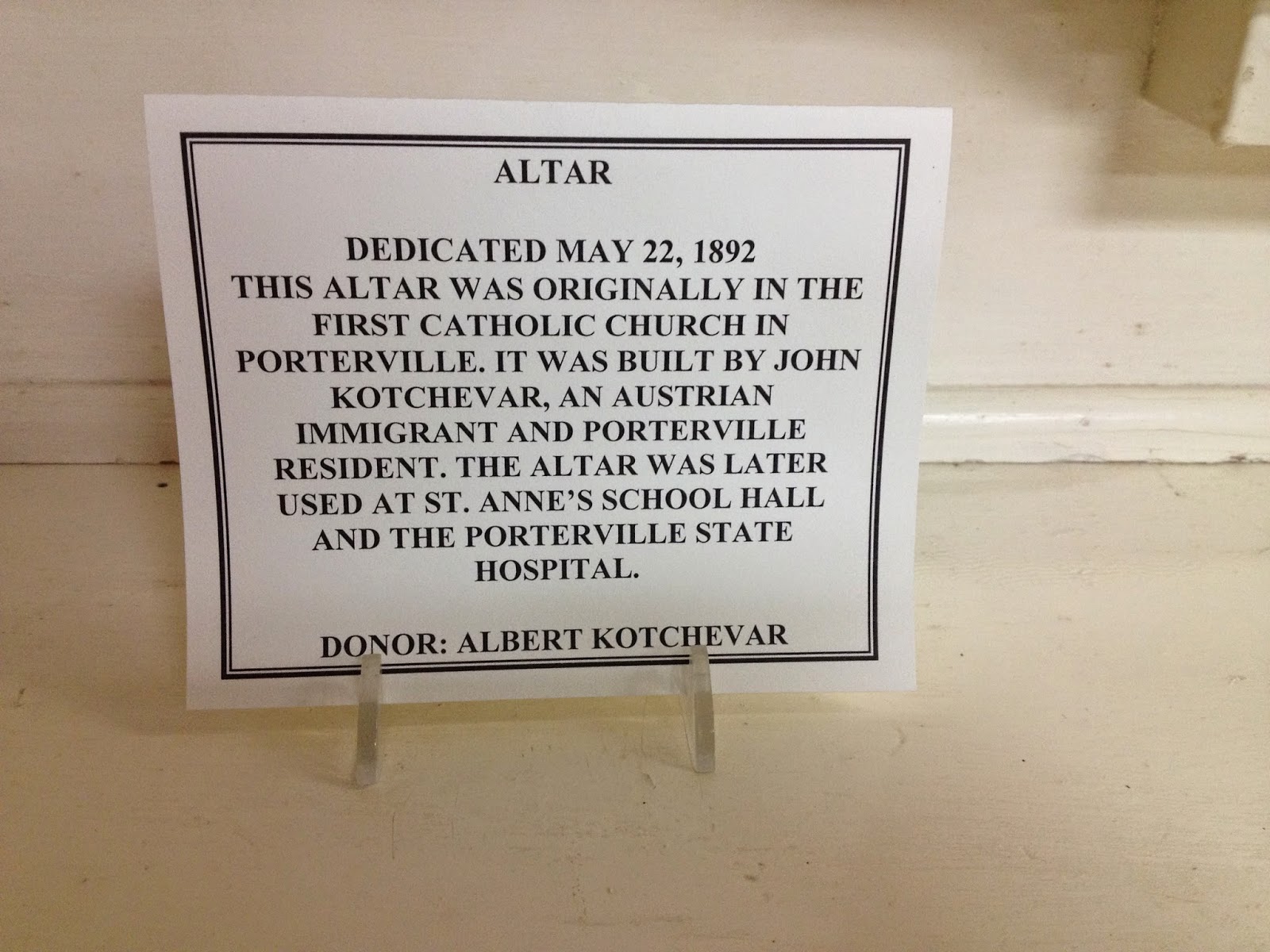 Anne's Catholic Church in Porterville. It's a beautiful piece of work and eventually it was donated to the Tulare County Museum. The Mooney Grove museum has it on display and I'd encourage you to stop by and take a look at it and the other displays there as well. Amy King, the curator, is always happy to have visitors looking at the displays. Thanks, Mary, for your family story. 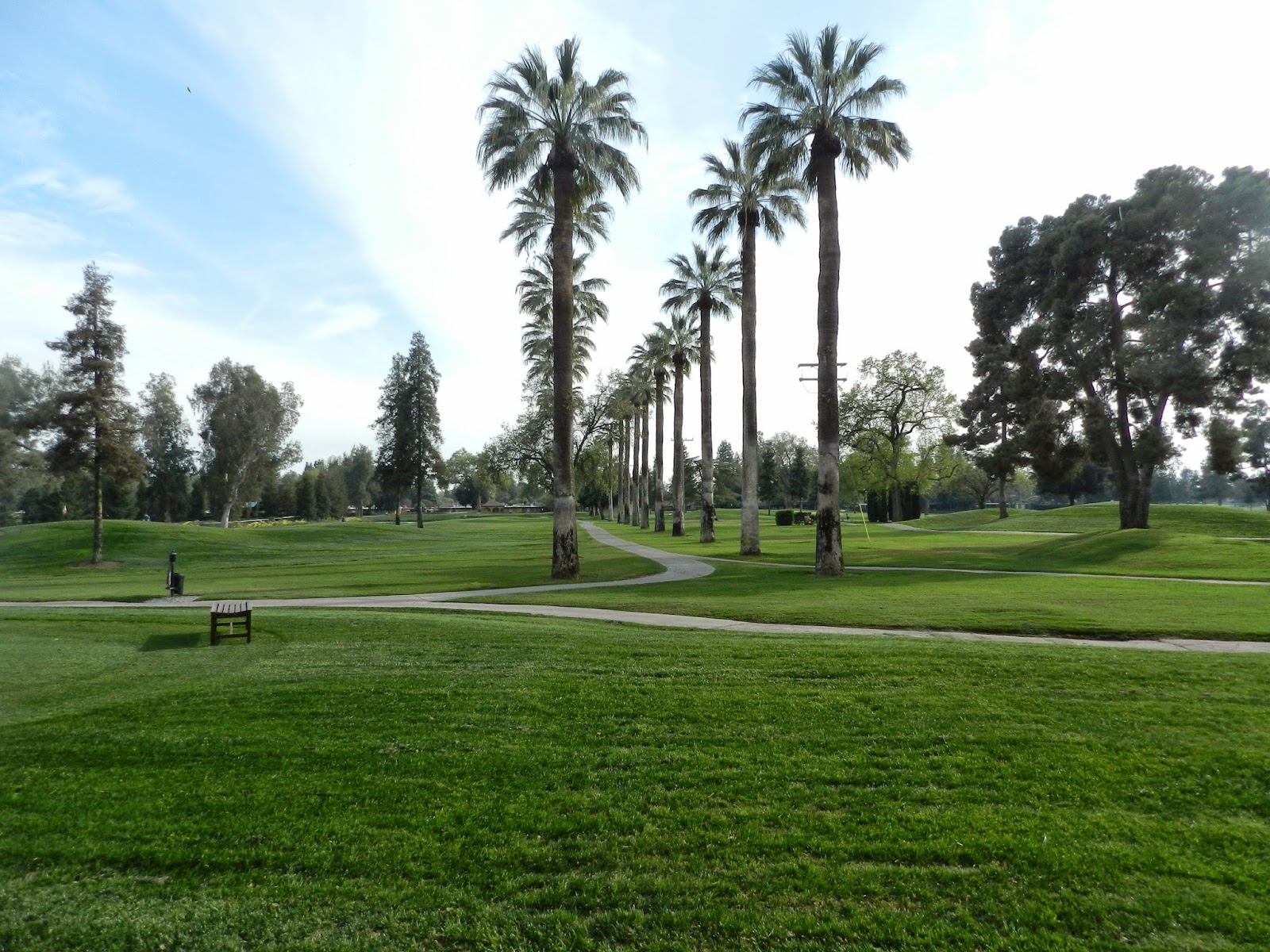 
The Hyde name is a well-known and well-respected name in Visalia and is recognized throughout California. Recently I heard from Dorothy Pifer Osborn who was born on the Hyde Ranch. The ranch was large and included the dairy property near where K-Mart is today which by the way is where the giant milk bottle was perched on a 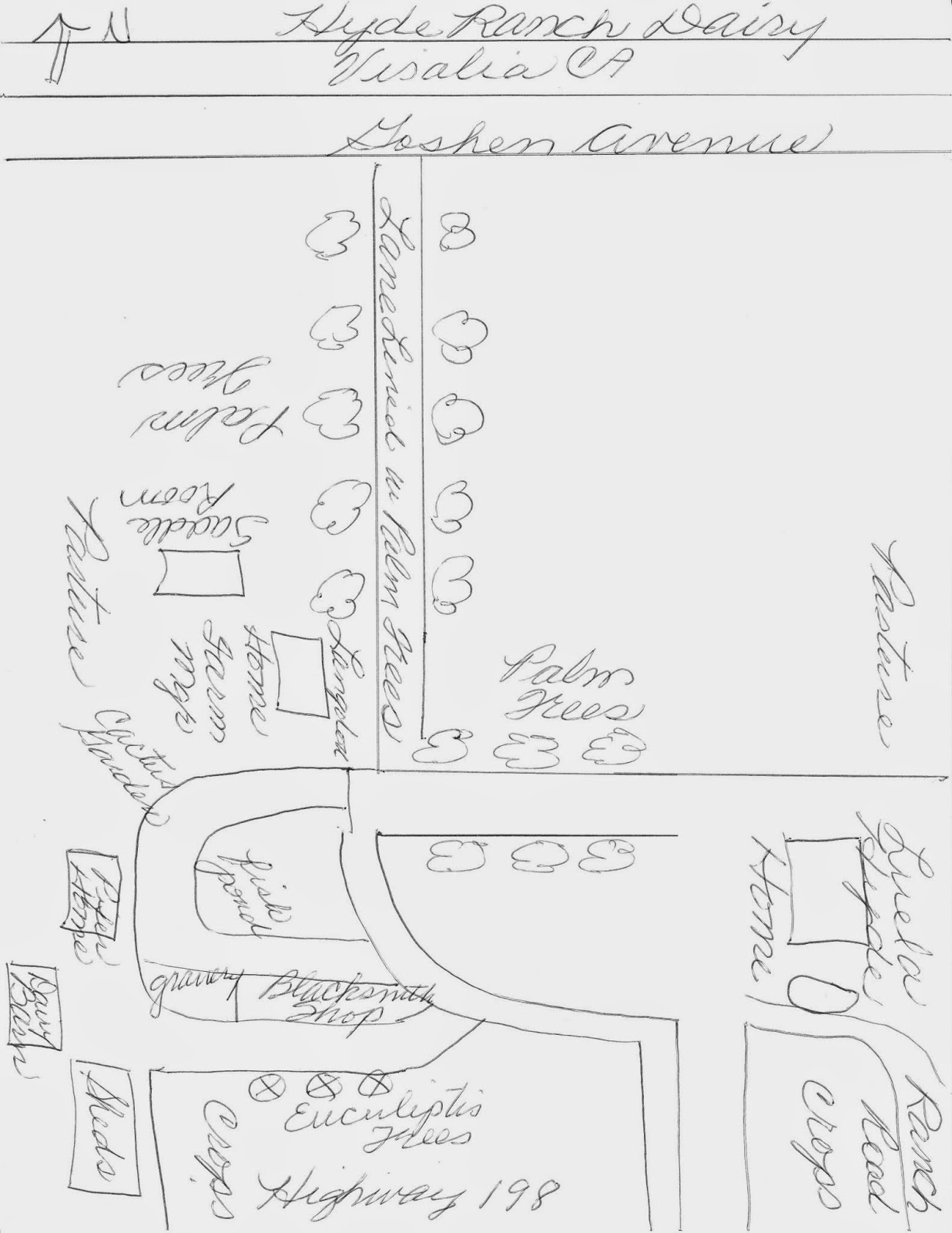 wooden tower. The larger part of the ranch was located to the north of there and would now be where the golf course is at the Visalia Country Club. Luella B. Hyde was born in 1883 to Cuthbert Burrel and she married Richard E. Hyde. They lived in this ranch house on what is now the golf course of the country club. Dorothy recalls the palm tree lane that you would enter off of Goshen Ave which led to the ranch property. The Hyde home was on the ranch property and Dorothy was nice enough to sketch her recollection of what the ranch looked like in its heyday. The photos show the Hyde home that was on that property. Also, as you can see, the palm lined lane can still be seen on the golf course today.


Some time back, Lee Warren, Jr. paid Visalia visit and shared some interesting stories about his father Lee  Otto "Sandy"

Warren. Sandy was a local musician who earned quite a reputation playing music at various locations around Visalia. When Lee came to town, he shared pictures of his father, some of which were stored for protection in a Motley's Café menu. It is a kick to look at the old bill of fare, so take a look and have some fun. By the way, Motley's was a popular hangout near the corner of
Main and Church streets on the south side of Main. It was named after the man that opened it, Jim Motley. In the early 1930s Jim sold the restaurant to his brother John and Jim moved to Fresno where he opened another restaurant. In this photograph Motley's can be seen on the left side of this presumed 1945 flood picture. Thanks Lee for sharing this relic of early Visalia.

***If you'd like to read about the disastrous Elks Lodge fire downtown, pick up a copy of the March 2015 Lifestyle Magazine. The article appears starting on page 12, or you can go online and read the story at   http://www.visalialifestyle.com/elks-building-a-struggling-structure-succumbs/   By the way the Lifestyle Magazine website has a comprehensive section on Visalia history where many historical articles are archived.

***In the last HH I mentioned the name Verfurth. It was the name on an automobile store here in Visalia and I asked you whether or not you knew anything about the name. Jason Hughes and Marian Shippey Cote did some great detective work and gave me an education on Henry J. Verfurth. If you're interested in knowing more, let me know and I'll share their findings.

***We have talked about the Cross building (Pacific Treasure's building now) in the past, and recently Jane Cross Shepard shared another tidbit about the building. She said in the building's earlier life (and I mean way back), there was a health club of sorts there complete with a swimming pool in the basement. Yes, I said swimming pool. Does anyone have more information about that?

***Visalia's Wunder Bar has been a frequent topic in HH over the years and Katherine Mangini shared another interesting story about the old tavern. She wrote, "When I came to teach and coach at the Visalia Union High School and Junior College in 1941, it was customary for some of the established women teachers, after the school day, to go to the Wunder Bar to talk. Against the west wall there were several booths each with a table and chair; on each side of the booth entry way a curtain draped, which could be pulled to closet the patrons. I was invited to go with them, this clutch of female teachers had been here a long time and were well established with the community. Behind the curtain we could have a beer without criticism, free of the social restraints. Here we could exchange gossip, talk about the school board policy as we sympathize, supporting each other. It was fun—a method of reducing the pressure expectations of female teachers. Exciting to do so illicit an act, defying the culture."

***Cindy Medrano asked me recently when Costco came to town. I don’t remember, do you?

***Erin Olm-Shipman and Matthew Spindler are the co executive directors of the Fox Theatre. As part of the 85th anniversary celebration, they are asking for our stories about the Fox and our experiences there. They would like to incorporate the stories into the big festivities. Come on! Don't be shy! Call them at the Fox office (559) 625-1369 and share. They'd love to hear from you.

On last Sabbath, a little girl living with Mr. Samuel Evans brought into the house, warm from the nest, a singular-looking hen’s egg upon which was plainly inscribed the words "O ye inhabitants of Visalia. Repent for the prophet will be in your midst in 1867." The letters appear as though raised on the surface of the egg by an impression made from within. This may or may not be a matter of great importance to Visalia, but at all events, the admonition to repent is timely and highly appropriate. Visalia Weekly Delta, February 27, 1867
Posted at 8:16 AM No comments:
Email ThisBlogThis!Share to TwitterShare to FacebookShare to Pinterest
Newer Posts Older Posts Home
Subscribe to: Posts (Atom)