This one was tough, but not for Roy Dressel. He was the first to correctly identify the interesting arched double door behind the old Albert's Studio (now behind Marcela's on Main Street.) Roy worked at Albert's for 6 years and recognized the double doors immediately. Congratulations, Roy. There has  got to be a good story regarding this brick building with the great old wooden doors.

Now for the new mystery spot. What building has this interesting eye-bolt and tension rod? Here are your 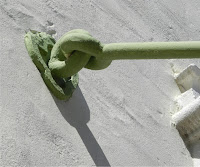 1. The building originally cost $225,000 to build.
2. It was once part of a famous business chain.
3. The building was finished the same year Edna Ferber's Cimarron become a bestseller.
4. The building has frontage on a street whose name means Holly Oak.
What building is this?  Good luck.

Visalia High Buses
Now this is a rare beauty! Lynn Davidian shared this great picture from her father's photograph collection. Charles Davidian is her father and he lived in rural Visalia. He took the bus into town with other country kids to attend Visalia High School. Charles who was 16 years old when this was taken in 1921, can be seen in front of the second bus from the left. You'll see a little blue pencil arrow pointing at him beneath his feet. The photo was taken in front of Visalia High School (now Redwood.) As an adult Charles became a fruit inspector for the railroad. He eventually settled in Alameda, California. Lynn remembers his stories about the perilous bus trips on bad roads especially during heavy rain. Lynn, thanks for sharing this wonderful old photograph.

A Rare Old Visalia Bottle
A friend of Pete Cowper sent him this image of a beautiful Visalia Soda Works bottle. I have only seen this bottle in pictures, never in person. Many newer Visalia Soda Works bottles can be found, but not this old one. This is rare! Sure would be nice to learn some of the history of this company. Anyone have this bottle? Anyone know anything about this company? Thanks Pete.

Barbara Hinds Joseph shared this great photograph. It shows the 1953 Visalia High School song leaders. She said that the girls did not have fancy uniforms but instead made their "jumpers" from maroon corduroy material. The group members are identified as:  top row L-R: Carol Powell, Harlean Mathewson, Judy Williams and Gladwyn Fryer; bottom row L-R: Nada Henderson, Marilyn Winters, Joanne Kelly, Barbara Hinds. Thanks Barbara for sharing this one. 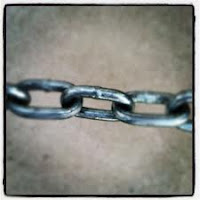 Looking for a Connection
Rosemary Dority, now Rosi Isbell Hendrickson, lives in Washington State but grew up in Visalia. She is anxious to get in contact with other former Visalians that now live in Washington. She has asked me to share her email and she wants to hear from all you expats. Rosi’s email is the pianobench@whidbey.com

Wilson's Ramblers – An Early Motorcycle Club
This is not a newly discovered photograph but it is a great one anyway. It has been circulated some, but it needs another exposure. It is, of course, a photo of the 1938 Wilson's Rambler Motorcycle Club. Members are wearing their fancy duds and Chief of Police Jim Fluty is in uniform on the right and on the far right is Visalia Mayor J. Pierce Gannon. I believe this photo was taken in front of the building that still stands at 115 N. West Street—one of the sites of Wilson's Cyclery. I do have identification on most of the members here, so if that is important to you please contact me and I'd be happy to share that.

***For those interested in the story of the Harrell Building (southeast corner of Court and Main) check it out online in the June, 2013 issue of Lifestyle Magazine The story begins on page 40. To read it click here: http://issuu.com/lifestylemagazine/docs/lifestyle_june_web

***Our area was called Four Creeks Country before European settlement. Stan Bennett asked for the names of the creeks that made up Four Creeks County. Well, the answer is, it depends on who you ask. The 4 creeks could be: Outside, Deep, Cameron, Packwood, Dry, St. Johns, Elbow or Mill. Take your pick. Jury is still out on this one. Sorry I can't be more precise, Stan.

***Tamara asked about the cute group of little houses at 704-708 W. Main Street called Grey Gables Court. All that I know is what I read in the Visalia Heritage book. They were built around 1923 by Otie Stevenson. Anyone know more?

***One more thing. You may have noticed a new look for Historic Happenings. My daughter Lyndsay made this beautiful change and she made it just in time for the 5 year anniversary of HH. Yep, this blog has been around that long and I thank all of you for staying with it. And Lyn, thanks for helping your dad keep up with the times. Your help and patience is always appreciated.

Town Organization—At last, after running the machine five or six years without a legal head, we have one. We are now a town defacto as well as dejure. We are glad of this arrangement for many reasons, but principally that we'll have food for editorial ammunition. City fathers are always legitimate targets to practice upon in the absence of better sport.  Visalia Delta, May 26, 1864
Posted at 11:13 PM No comments:
Email ThisBlogThis!Share to TwitterShare to FacebookShare to Pinterest
Newer Posts Older Posts Home
Subscribe to: Posts (Atom)