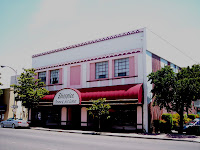 Congratulations go out to James Hitchcock who got the latest mystery spot correct. The building is the IOOF Building on Court Street (Sharples is on the ground floor) between Main and Acequia. Good job again, James. 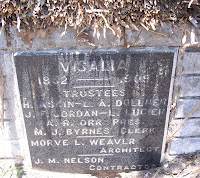 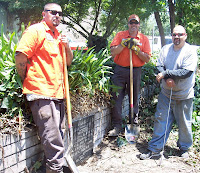 Today I received a call from Brian Vanciel, City of Visalia Wastewater Collection Supervisor and he told me his crew had found an interesting historical relic behind the City of Visalia police and fire departments along Mill Creek. I met his crew  (Rick Paredez, Cruz Ruiz and Geraldo Silva) and they told me they had been cleaning brush along Mill Creek and discovered a historical marker built into a concrete cinderblock wall. I looked at it and believed it had been part of a former city hall building at Acequia and Church. I later verified it. Why it was saved from the razing of the old city hall building, I don’t know, but I suspect they didn’t have the heart to toss out the old historic relic. Now it can be seen in a concrete wall just on the north side of Mill creek between Johnson and Stevenson. By the way, my records indicate the old city hall building that it was part of, was built in 1910 and torn down in 1970. At that time the new city hall was built near Acequia and Johnson which might explain why they took the cornerstone  and incorporated into the wall. The 100 year old plus etched stone is a nice visual when walking along Mill Creek.

Mixter’s Drug and the Special Scale

For many years Mixters Drug sat on the corner of Main and Court streets on the ground floor of the old Palace Hotel shown here in 1939. Barbara Hinds Joseph recalls that the Mixters Drug Store, had an old scale that was located in the back of the store near the pharmacy counter. In 1983, she had her picture taken next to the scale. Barbara would like to know what happened to it. Anyone know? 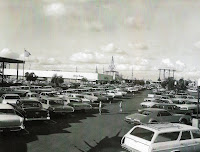 Jon Greeson shared this photograph with us. A longtime Longs Drug employee (1982-2010), Jon misses his old employer. Longs was bought out by CVS. The Longs shown here opened at the Visalia Fair Mall in November 1964 and was located where Old Navy is now. Thanks Jon.

Livestock Sales Yard
Former Visalian Jim Parks shared a photograph taken by his father James L. Parks, showing the dedication ceremony for the new livestock sales yard. This photo was taken from the top of the Sequoia Walnut Growers facility at Ben Maddox and Goshen on March 9, 1940 and shows the hundreds of people in attendance Thanks Jim for sharing your dad’s photograph. By the way, Sandy Newman provided a written copy of the Farm Bureau and Livestock Marketing Association History. Great stuff! 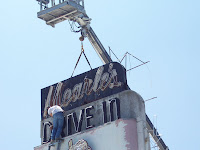 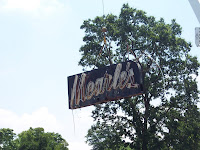 Well, another piece of the Mearle’s Drive In chapter is no more.  On Tuesday, June 7, 2011, all the Mearle’s signs came down from the 71-year old building to make way for the restoration of the old timer. The Mearle’s tower sign (the one at the very top of the building) went up in 1962 we believe, and it became a welcome sight for many travelers and locals hungry for a tasty meal. The almost 50-year old Mearle’s sign was a beacon of sorts, and now makes way for a new chapter for the old building. I look forward to the new chapter (The Habit) for this landmark building. By the way, the Mearle’s signs are now safely at the Tulare County Museum at Mooney Grove Park. 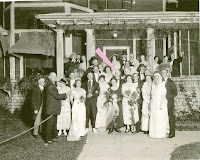 rles Whitmore, a former editor of the Visalia Times. Delta and she shared this group photo with Sheila. He was born in 1876, came to Visalia in 1906, and in 1909 he purchased the Visalia Delta and ran the newspaper until the 1928 merger of the Delta and the Times, although he remained with the Visalia Times Delta until 1944. He was on the State Board of Education and he was a State Highway Commissioner. He died in 1949 in Los Angeles. This photograph shows the Whitmore family with a who’s who of Visalians on the front porch of the Whitmore home at 300 West Grove. Home still stands today. I wonder why Nat Levy (the man in the lower left) has a garden hose in his hand?

***Gilbert Gia, well-known Kern County historian, is so generous in sharing Tulare County/Visalia history that he finds in the Bakersfield Californian newspaper. His latest sharing is a story about “The Four Horsemen” (Tulare County boys) who joined the R.A.F. (Royal Air Force) before the U.S. entered World War II. Thanks, Gil.
***Alan George identified the artist of the Visalia illustrated map highlighted in the last HH as K. Kramer. Anyone know anything about him? He did a similar Tulare County map.
***Speaking of the Hotel Johnson, Karen Kirkpatrick has an old iron bed frame from the hotel and I have 2 Astra Bentwood dining room chairs from there also.  And by the way, according to Sally Gerrard Boyne, the Stephen Gerrard family had lunch there after church each Sunday. Sally called it “elegant.”
***Anyone remember Sierra Blvd? Art Browning tells me that prior to the 198 Freeway, Sierra Blvd ran east and west, but was only located west of Visalia.
***Duane Copley shared that he and his brothers were raised in the family home at 800 W. Myrtle, part of the Home Builders Tract. He recalls some of his neighbors were, the Chambers (Dry Cleaners), John Locke (the judge), Annie Mitchell (Tulare County historian, and More Peterson (county official.)
***Bill Allen’s wife Margaret is the sister of Evelyn Jordan, a former owner of the old Garcia home—the house that became Kaweah Hospital. Dwight, her husband, and Evelyn Jordan were the last to live in the house before the property was sold to the Visalia Times Delta and the house came down.
***Joseph Johnson emailed me and advised that he had descendants in Visalia all the way back to the 1800s. His grandfather, Joseph H. Johnson was a Visalia businessman who had a sawmill or lumberyard near the “train depot.” Anyone know that name Joseph H. Johnson? If so, let me know and I’ll pass along the information.

Griffis Park - Visalia’s Exclusive Residence Tract
Your attention is again called to the location on South Court Street—north of Tulare Avenue. Only short walk from Palace Hotel corner. If you are at all interested in providing yourself and family with a home in this City’s finest neighborhood which is restricted against all persons other than Caucasians, and eight other specific restrictions which are protective to your best interests—then either call at the office or phone, and one of our salesmen will be pleased to interview you at your convenience.
Part of an ad from the Visalia Morning Delta, January 24, 1915
Posted at 7:13 PM No comments:
Email ThisBlogThis!Share to TwitterShare to FacebookShare to Pinterest
Newer Posts Older Posts Home
Subscribe to: Posts (Atom)