Congratulations to Brent Nunes for being the first to 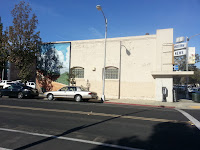 correctly identify the last mystery spot. It, of course, is the south wall of the old mid-town news building on the corner of Church and Acequia streets. Nice work, Brent.

Ok, here are your clues for the next one:
1) This is mounted on public art sculpted by artist Carroll Barnes
2) The dedication of this art was on July 14, 1944
3) It is on the same grounds as it was originally placed, but at a different location
4) Birds are incorporated in this art.

Where is this piece of art? Good luck.

Greenacres Airport—Gone But Still Remembered
Phil Kneeland remembers the old Green Acres Airport very well. In fact, he flew out of it as a pilot for Greenacres Aviation. He provided this photograph which was taken at the airport in about 1945, but he doesn't recognize the man pictured here. Does anyone 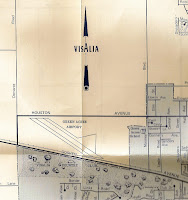 know him? By the way, Joe Doctor wrote that the Greenacres Airport was first called Hyde Field and in the 1920s, it was a forest service aerial fire surveillance base. The airport no longer exists, but it was located just north of Goshen Ave directly across from the Visalia Country Club.

their studio in the Holt Block (north side of West Main Street in the 100 block), and boasted that they were photographers specializing in "crayon, water colors, frames, etc." Photographs of photographers are hard to come by and we are lucky to have these two, even though they are on the grainy side. These were taken around 1897. Many Robinson & Churchman photographs continue to circulate.

Street Lights In All Different Forms
Visalia's experience with the street light dates back to at least Christmas Eve 1859 when a town lamp, 12 feet high, 4 feet wide with 30 panes of glass was lighted. Composed of 4 camphene lamps with reflectors, the light stood on Main Street between Court and Church. A multitude of street

lamps have been placed on the streets of Visalia over the years since then with varying degrees of success. The technology used and the shapes have varied tremendously, and by 1913 thanks to the Mt. Whitney Power & Electric Company, the city settled on electricity as the standard source of power. Although the styles of the street lights have changed, illuminating the streets for convenience and safety has pretty much been the main purpose. To my knowledge there has been no documentation regarding the various styles used in Visalia, and here is one sample of a style used on Main Street. Sure love the look. Anyone know if any of these old timers still exist in the city?

Browne's Little Print Shop
Not too many years ago, a beautiful little building stood on the south side of Center Street between Court and Church. Architecturally, it was a gorgeous building housing Browne's Print Shop. I'm sure redevelopment forced this little building and the surrounding ones to be torn down. Now the area is a parking lot bordering Center Street between Court and Church. My records show that Charles A. Browne started his

commercial printing company in 1925 I believe at 908 S. Court. By 1932 the shop was at 105 E. Center Street (building shown here I think), therefore, I believe this building was built between 1925 and 1932. My file is noticeably slim regarding the history of this building and the business, and I'd love to know more. Can anyone help? 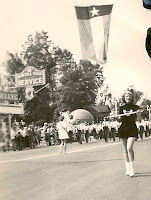 Bartell Todd—Known for Gasoline and Tires
In the day, Visalia's downtown had numerous gasoline filling stations sprinkled about. It's not surprising because Visalia's downtown area was really the only commercial area in the town. One of the early filling stations was owned by L. S. Featherstone in the 300 block of W. Main Street. In 1921 Bartell Todd, a "well known young Visalian" took it over. The business

address was 309 W. Main Street and was located across the street and a little west of the Fox Theatre. The first photo here shows a small portion of Bartell Todd’s station during a parade with the big orange in the background. Anyone know anything about the orange? Was it a root beer stand? The beautiful advertising blotter shown here is courtesy of Sharon Doughty. I love the bright colors and the wonderful artwork. Anyone know when the Bartell Todd business left this location?

**In the last HH I mentioned a couple of Works Progress Administration (WPA) sidewalk markings by Miller's Mortuary which were found by Richard Zack. Joseph Vicenti let me know that he had found more of these WPA markings in the Home Builders Tract and even spotted some WPA markings on the concrete bases of some picnic benches at Cutler Park. Thanks, Joseph, for sharing that.

**If you'd like to read more about the historic American Legion Memorial obelisk now located near Main and Hall streets, pick up a copy of the December 2015 issue of Lifestyle Magazine. The article starts on page 12 or you can read it online at http://www.visalialifestyle.com/history/

**In the last HH, I included a Visalia map and Phil Esbenshade asked us readers to estimate the age of the map. I speculated it was published probably in the later 1960s and a couple of you eagle-eyed readers noted one of the business ads on the map proudly proclaimed that they had been in business since 1976. So much for my estimate!

**In the last HH, I shared a Church Street photograph postcard and asked if anyone knew anything about it. Russ Dahler, Aaron Collins, and Joseph Vicenti identified the house on the left and the cross street as Myrtle. So the image is Church Street looking north through the intersection of Myrtle. The J. V. Garcia home is on the far left and still stands today. Thanks guys for helping with this photograph. I'm impressed!

Good News for Bachelors—A short time since a family arrived in Tulare county from Texas composed of the father, mother, twenty-one daughters and one son. During the past week, another family from the same state arrived and took up their abode amongst us, in which were fourteen unmarried daughters. Visalia Weekly Delta, April 14, 1860
Posted at 4:39 PM No comments:
Email ThisBlogThis!Share to TwitterShare to FacebookShare to Pinterest
Newer Posts Older Posts Home
Subscribe to: Posts (Atom)