Thanks for visiting Historic Happenings! If you are not on the email list yet, and would like to be notified via email when a new posting of this newsletter is made, please email Terry Ommen at histerry@comcast.net. I will add you to the list. I will not share your email address with anyone without your permission. 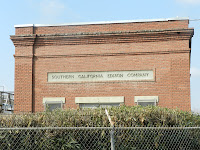 Marian Cote was the first to identify the last mystery spot and get this, she was the only one! I took your request for harder mystery spots seriously, huh? It was the old Southern California Edison building on the southwest corner of E. Main and Ben Maddox. Congratulations Marian and thank you for your great detective work, and thanks to all of you who took a stab at it. Now, so I don’t lose mystery spot gamers, here is a slightly easier one, I think.


Here are the clues: 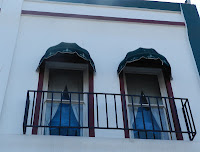 1) This building is a big mystery to me as I do not when it was built, but it is clearly an old timer and has a lot of character.
2) It has been a meat market, department store and men’s clothing store.
3) It is surrounded by food, entertainment and classrooms.
4) The business currently occupying it has been there for many years.

The Stevenson name goes back to the very beginning of Visalia. Sebert Stevenson, the patriarch of the family, was reported to be the second white child born in Tulare County. He was born in 1854 in a house located on what is now the campus of Redwood High School. His parents came out by wagon train and Stevenson Street was named for that pioneer family.


A Little Bit of Norwalk in Visalia

Some time ago, an old photograph probably taken about 1944 was shared. Adjacent to the Oval Park was a Norwalk service station located at 101 N.E. Third operated by Ira D. Miller. On the same site in the 1930s was the Lincoln gas station. This historic part of Visalia dates back to 1875 when the Oval piece of land was designated a park. It was first called North Park. It was neglected for many years and became a dumping ground for trash; eventually, it became grazing land for sheep and cattle.

Recently, an old election card was shared. It announced the candidacy of Floyd Depew for Constable of the Visalia Judicial District. Most old-time Visalians remember Floyd as a Visalia Police Officer. He worked for VPD from 1941 until 1974, when he retired. In 1954, Floyd ran for Constable and cards like this one were handed out. Floyd is legendary figure in Visalia, and even though he is gone, his name is still remembered. Here he is shown shortly before he retired. I had the pleasure of working with him for a couple of years.

Visalia---Part of the National Historic Trail?

I was recently alerted to a National Park Service effort to get the old Butterfield Overland Mail route—all 2,800 miles of it—designated a National Historic Trail. Tulare County and Visalia played a big part in the old stage line that operated from 1858-1861. Visalia was a timetable stop and was recognized as the town offering the best welcome to the stage on its inaugural run. The Clampers put up a marker on E. Main Street in front of the old Togni/Cross building in 1973. It was near that site that the stage actually stopped. Unfortunately, the bronze stage graphic plaque of the marker has been lost or stolen and now only the bronze text portion of the marker remains. By the way I hope the Clampers would work on replacing the missing part of that marker. The community would love it and visitors, too. National designation as a historic trail would be a great thing for Tulare County and Visalia. I encourage you to take a look at the e-newsletter from the Park Service. The link is http://parkplanning.nps.gov/document.cfm?documentID=45312 If you go to the bottom of this link you can click on the link called Trail Study News January 2012. There you will find some great information about the project. If you care to comment on the program, you can do it there. Thanks also to Troy Tuggle for sharing this set of Butterfield commemorative centennial U. S. stamps from 1958. 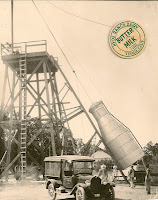 Richard Drath recently found some goodies from Visalia’s past in his family’s collection. One of the items was this Hyde Ranch Dairy milk bottle cap. It is in nice shape and a great old piece of local memorabilia. Many of you know about the Hyde Ranch Dairy, but in case some of you don’t, here is a little bit of history. The dairy was named for the Hyde family obviously, and was located where K-Mart is now near County Center and Hwy 198. It had a recognizable large milk bottle on the top of a high tower. It stood out prominently making it a significant landmark both on the ground and from the air. This photo shows the milk bottle as it is being lifted to the top of the tower. The truck, by the way, is marked on the side door, T. T. Godsey Contractor. The second picture was supplied by Marian Shippey Cote and shows the lineup of delivery trucks. Hyde Ranch milk bottles can still be found as well as these caps. Thanks again, Richard for preserving pieces of Visalia’s bygone era.

Old Malloch Homestead Up for Grabs
Catherine Doe, daughter of Russell and Tamara, is looking for a new location for the old Malloch homestead house located in rural Visalia. Peter Malloch homesteaded the land in 1870s and it is believed the house on the property was built about 1886. It is now in the path of development and needs to be moved if it’s going to be saved. It has lots of character and Catherine tells us that the outhouse could be thrown in to sweeten the deal, so to speak. By the way, in the back of the property an early hitching rail still stands. I wonder how old that is? Anyone interested in the possibilities with this old and historic fixer-upper, let me know. Thanks, Catherine, Tamara and Russell for letting us know about this opportunity. You can check out an early picture of this home with the Malloch family standing nearby. Go to the Tulare County Library website and see the photograph here:
http://www.tularecountylibrary.org/cgi-bin/photo_search.pl?words=malloch&how=and&sh=on&ti=on&cd=on&page=1&s=simple 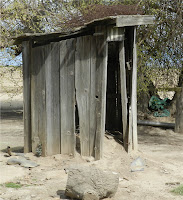 ***In the last HH we mentioned Jefferson School and after reading it, Brent Nunes passed along that when the school was torn down bricks were salvaged to build a neighboring home.
***In historic Visalia we don’t always think about old buildings with elevators, but we had them. The first was probably in the 1876 courthouse. The old Bank of Italy building, now the Bank of Sierra building, had (one and still does). The old Mt. Whitney Power building had one (now Quality Jewelers and other businesses), and I’m told the old Elk’s building located at Main and Locust had one, too. The Elks building burned. Someone also mentioned that the old Sweet Store had an elevator as well. Riding those early elevators was definitely a thrill ride. Carol Mathewson’s mom worked at the old courthouse and in the late 1940s, she was stuck in the elevator and in order to get out, she had to climb a ladder that extended down the elevator shaft. Know of any other elevators in early Visalia?
***Thanks to so many of you for responding to Sue Gunderson’s request for help. She asked about the rock band that visited Visalia in 1960s, but she couldn’t think of the name of the group. A number of you commented, mentioning groups such as The Association, the Grass Roots, Nitty Gritty Dirt Bank, and Beau Brummels. All of these possible were passed on to Sue. Sue now believes it was the Grass Roots that she saw. Thanks again to all of you for coming to the rescue.
***Joseph Vicenti recently asked a couple of interesting questions. "Who in the Visalia area has had the same phone number for the longest time? And which individual or company has had the same address (or PO Box) the longest?" First of all, Joseph, I will start this off. I have had the same phone number for the last 40 years. Can anybody top that? I'm sure you can.


** Kaci Hansen passed along a website she discovered called http://www.classmates.com/  On this site are many online school yearbooks including those from Visalia schools and you can check out pictures, ads, etc. Very cool. Thanks, Kaci.

…We notice the names of several loafers who “froze out” of this burg a year or so ago, figuring pretty extensively at Aurora, as secretaries of mining companies, etc. Landlords and saloon keepers will suffer some. Visalia Delta, March 5, 1863
Posted at 7:23 PM No comments:
Email ThisBlogThis!Share to TwitterShare to FacebookShare to Pinterest
Newer Posts Older Posts Home
Subscribe to: Posts (Atom)