Now for the next one.  This is an unusual mystery spot as it is not a building but rather remnants of a railroad spur left embedded in the street. Where is this track remnant? Here are your clues:
1) These tracks are on a street running east and west.
2) According to Spiro Agnew, a type of business near these provided lining for the bottom of birdcages.
3) I believe this spur line was once used to deliver products.
4) The cross street adjacent to these tracks was the west boundary of the earliest city boundaries.
Good luck!

Wreck of the Visalia-Tulare Railroad
Patricia Geiger recently asked about the train wreck involving the Visalia & Tulare Railroad. It is an interesting story and deserves a mention here. In 1888 a little commuter train was kicked off between the towns of Visalia and Tulare. The little line travelled  between Visalia and Tulare and back again. It struggled to stay alive financially, but its survival was not in the cards. On May 5, 1900 with 35 passengers onboard it left Visalia for Tulare. Cruising at about 20 mph near what is now Caldwell and Mooney, Engineer Inness was loading wood in the engine firebox and didn't see a cow,

some say calf, that wandered onto the tracks. Inness applied the brakes but not in time. He hit the animal and it wrecked the little train. The cow was killed and the accident was also fatal for the railroad. Shortly after the incident, the remaining rolling stock, rails, ties and other equipment was sold to a lumber company in Seattle. That ended the Visalia & Tulare Railroad.

More 1955 Flood Pictures Float to the Surface
Karyn Crowe Ruiz recently shared some photographs she found in her parent's house. Her parents, Dan and Nancy Crowe, both deceased, lived in Visalia and Karyn was cleaning out the house when she found some 1955 flood photos. These two show some

interesting birds eye views of Visalia during the infamous flood. Notice the Christmas decorations and all the business signs on both of these pictures. The marquee at the Fox advertises Martin & Lewis in "Artists and Models" and the marquee also mentions Walt Disney's "Music Land" in Technicolor. The other photograph shows a view northbound on Locust from about Main Street. Notice Chan Bros. Market, Purity Store, Main Drug and the old Jordan Building ( Charley’s Shoes ). All these buildings still stand today. 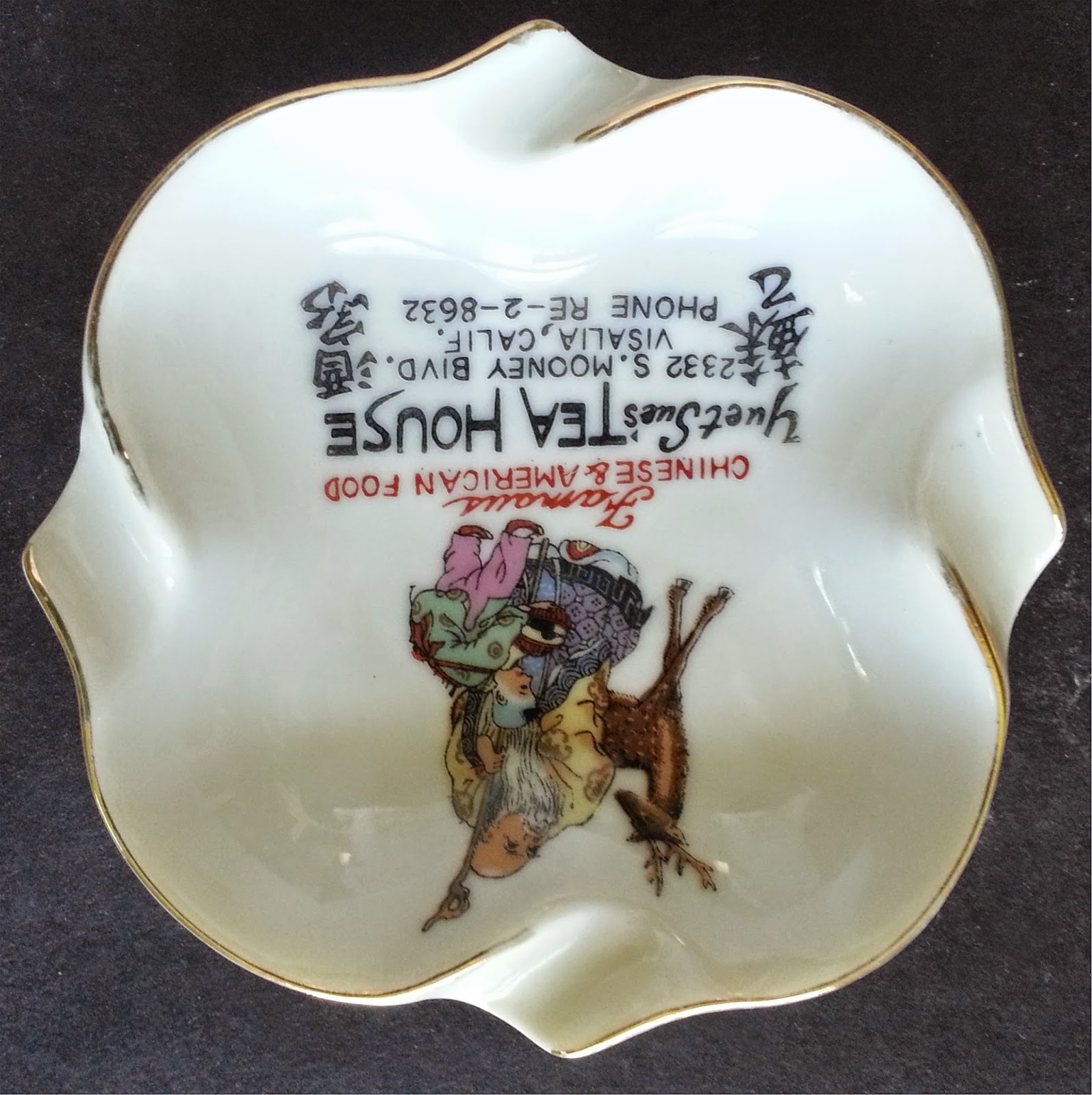 Yuet Sue's—A Hunt for a Photograph
Jaime Hitchcock is looking for a photograph of Yuet Sue's restaurant. It was was once located at 2332 So. Mooney Blvd. (where Denny's Restaurant is now.) He remembers the entrance to the restaurant which had two decorative lions in front, one on each side of the entrance. Sometime while the restaurant was still operating, the lions disappeared. Were they stolen, salvaged, or destroyed? No one seems to know. We are on the hunt for a picture of  Yuet Sue's so we can see the lions. Anyone have a photo or information  about the lions? By the way, this is a souvenir ashtray from the restaurant.

J. Thomas Crowe—Well-known Visalia Attorney
Karyn Crowe Ruiz also found in her parent's belongings some photographs of  her grandfather, J. Thomas Crowe. Tom Crowe , as he was called, was a prominent attorney as well as a well-respected community leader. In 1970 Tom became the only attorney from the San Joaquin Valley to ever serve as President of the California State Bar. He was a lifelong Boy Scout advocate and

in 1980 he was given the 1st  Distinguished Citizen award from the Mt. Whitney area council for the Boy Scouts. In 1936 he married Wanda Walston of Visalia, and three children resulted from that marriage—Marilyn, John and Dan. Tom Crowe was named Grand Marshall of the Rodeo Parade in 1970 and is shown here with his wife Wanda.

Acequia— Wow Have We Slaughtered the Pronunciation!
Recently, I was listening to a historical podcast and the narrator was talking about water and irrigation on the land that is now in New Mexico. He kept referring to a small irrigation channel that he pronouncedd "a say kia". I was intrigued by the word and finally realized he was using the correct Spanish pronunciation for the word we are all familiar with: Acequia as in Acequia Avenue. I understand California is full of Spanish names like Sierra Nevada, Los Angeles, Santa Clara, and so on, and frequently, the Anglo pronunciation is a little different from the Spanish. The Anglo pronunciation of Acequia isn't anything like the Spanish pronunciation. If you'd like to hear the exact pronunciation of the word, go to: www.spanish.dictionary.com  In the search bar at the top, type the word acequia and click search. Midway down in bold is the word acequia with a little speaker next to it. Click on the speaker and hear the correct pronunciation of acequia. I think you will be surprised.

***Recently, Jas David Lacey noticed the old barn and tank house at the corner of Caldwell & Linwood. These old structures had been hidden for so many years and because of some clearing of land, they are now exposed. Does anyone know anything about the old farmhouse history or the property history? It is on the northeast corner of Linwood and Caldwell. Drive by and take a look.

***If you'd like to know more about the historic Armory Hall here in Visalia, pick up a copy of the August 2014 Lifestyle Magazine and on page 50 you can read about the interesting old building, or you can read it online at:  http://issuu.com/lifestylemagazine/docs/lifestyle_aug_web_cd9dc5805c2ee7

***There is a skateboard museum in Morro Bay and when Paul Spencer visited it, he heard through the owner that the skateboard park that used to be at Mooney's Grove "was the very first skateboard park built in the United States." Does anyone know anything about this distinction?

His head swelled, his voice is harsh,
When he awakes at morn.
Because each night he loves to drink
The well-aged juice of corn.
The Visalia Daily Morning Delta, January 2, 1900  Note: Published  right after a big New Year's bash, I'm sure!
Posted at 5:46 PM 2 comments:
Email ThisBlogThis!Share to TwitterShare to FacebookShare to Pinterest
Newer Posts Older Posts Home
Subscribe to: Posts (Atom)