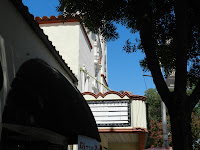 Well, we have a new winner. Rich Manley was the first to identify the mystery spot as the Main St. side of the Fox Theatre. The big eye bolt and support rod is one of several that help hold the marquee overhang. It's not surprising that Rich would get it as he has spent countless hours at the old movie house donating his services. Congratulations Rich!

Okay, are you ready for the next one? Where is this plaque? Here are your clues:
1. This plaque is mounted at ground level.
2. The man mentioned here donated the land for the first fire house.
3. The tree fell in 1988 and this marks the spot where it stood.
4. This plaque is near the location of the first fire department building.

Where is it and please be specific?  Good luck.

When the Big Birds Flew Into Visalia
Peter Cowper found these pictures among his mother's slide collection. She took these photographs probably in late 1977. Today it seems almost impossible that 100 plus passenger 737s landed at the Visalia airport. Mario Cifuentez, the currently Visalia airport manager, reminds

us that now Great Lakes flies Beechcraft 1900 twin turbo prop 19-passenger planes into the same airport. The future direction of commercial airline passenger service in and out of Visalia sure seems clear to me.

Okay, I'm weird, but there is just something interesting about craftsmen from an earlier time that were so proud of their work, they actually signed it. Quite some time ago I shared the "mark" of one of these craftsmen. His name is J. M. Nelson and he laid so many miles of concrete in Visalia that he became known as the "sidewalk man." His heyday was around 1910 and his office was at 700 N. Bridge Street. But this concrete master had a competitor named Kaspar Schlaich (pronounced Shli). He also poured sidewalk and curbing about the same time. Recently, Richard Zack found a signed piece of Kaspar's work in the west side curb between 807 and 815 So. Court. Very exciting! On one spot on the curb is etched the name Schlaich & Krey (obviously a partner and also a carpenter) and nearby is etched 1913 into the curb. Just think 100 year old curbing. Nice find Richard, and thanks for passing it along. If any of you ever see interesting old curb or sidewalk markings, please pass them along so I can share them. There are a couple of marked “Noble” sidewalks also I believe. 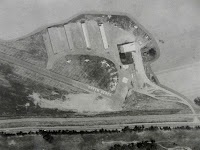 Green Acres Airport Forty Years Ago
We've talked about the nonexistent Green Acres Airport before, but I recently came across 3 aerial photographs of the airport and surrounding land. They show the airport (notice the name on the runway) for the years 1974-1979-1984. The one included here is the 1974 photo. For those unfamiliar with the airport, Tulare County historian Joe Doctor said it began as Hyde Field in about 1920. It was located just north of Goshen Avenue between No. Mooney and Demaree and to the west of the Visalia school bus yard. The site is directly across the road from the country club. In its later years it was used by crop dusters. It closed in about 1987. For about 15 years the site went through a cleanup process and the land or at least most of it is vacant today

The Bradley Building Lives On
The old Bradley Law Office at 115 So. Church Street is shown here in this 1948 photograph. It had served 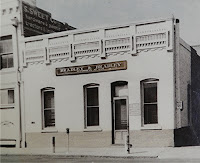 as office space for 3 generations of Bradley lawyers. The building was built in about 1885, but before that the well known Brick Church once occupied the site. This church became the reason the street was named Church. This building is a nice example of the pioneer buildings of Visalia. By the way, Nathaniel O. Bradley, retired Tulare County Superior Court Judge, died on July 12, 2013, at the age of 94.

Snow-covered Sierra Right Next Door
HH follower Tony Cornet shared this photograph recently. It shows the 198 Freeway in Visalia looking east in about 1975. Tony credits Robert Speidel, one time editor of the Times Delta, for the photograph. Boy, we could have all benefited from this picture a few days ago when were sweltering 100 degree plus temperatures. Amazing view! Wish we could see it more often. Thanks Tony for sharing it.

***Mark your calendars for the dedication of the Pacific House plaque (northwest corner of Church and Oak) on August 23rd at 10:00am as part of the City of Visalia's Historic Recognition Program. The public is invited and you'll learn more about this Visalia landmark in a future article in the Visalia Times Delta. This old building is also set to be identified as a "This Place Matters" site by the Kaweah Kollectors.

*** Courtney Creveston is very observant. In the last HH posting I included a rare photograph of several old Visalia buses lined up in front of Visalia High . If you look closely, as Courtney did, you will notice that someone misspelled Visalia on the side of bus #3, spelling it Visailia. How that could that happen is anyone’s guess. There must be a story there. Good observation Courtney.

***Great news! The local history calendar started by Visalia Community Bank over a decade ago is going to continue with Central Valley Community Bank. They will be asking for photographs from the public, so watch for the announcement in the newspaper. The tradition continues.

Immigration is coming into our Valley rapidly, no less than thirty families have taken up their abode with us within the last month. If they come here to work and help develop our country, they are heartily welcome. If they come hoping to live without work, they will find it as good a place to starve in as any, excepting that on account of the generous character of our soil and society they will linger a little longer in their misery.  Visalia Weekly Delta, October 18, 1865
Posted at 9:30 PM No comments:
Email ThisBlogThis!Share to TwitterShare to FacebookShare to Pinterest
Newer Posts Older Posts Home
Subscribe to: Posts (Atom)