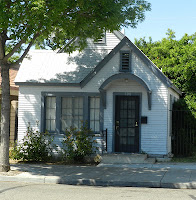 Congratulations Joseph Vicenti for being the first to correctly identify the last mystery spots as one of the cute little cottages known as Grey Gables Court at 704 W. Main Street. Nice work, Joseph and quick too!

Now for the new mystery spot.  I am now moving to an alley location to test your knowledge of the interesting backs of our buildings.

Here are the clues on this building:

1. The brick arch with large double door is an unusual feature of this building, and may be the only   one of its kind in Visalia.
2. This  building is across the street from the old Mt. Whitney Power Co. building that still stands.
3. It  currently houses home furnishings.
4. At one time the building was a very close neighbor to Luke Bianco's grocery store.

Where is this building? Good luck.

The Man Behind the Flowers

In the last issue of HH, I highlighted the Peter Perkins Flower shop that first opened in Visalia in 1914. I received a couple leads on more information about the man whose name is still associated with the business. (Well close, at least. Now it is spelled Perkens with an "e" not an "i".) Charles Loffland shared this newspaper photo and the obituary on this interesting man. According to a notation on the clipping, Peter died February 15, 1958 at the age of 64. Thanks Charles for your help on this.

In the last two postings of HH, I have talked some about the Visalia Vapor Trailers, a hotrod club that was started in 1949. I asked if anyone had a club plaque. I heard from Tom Runyon, current president of the club and he showed me his sand-cast aluminum plaque.  Thank you Tom for sharing that. If you see one of these in a back window or on a bumper of a car, you know you are looking at a VVT member.

Valley Voice—It's Coming Back!
Remember this shocker? December 22, 2011 was the last published issue of the Valley Voice. For over 30 years, the Voice offered Visalia and the broader Tulare County area another news source, then on December 22, 2011, it suddenly stopped. Well, on Thursday, June 6th the Valley Voice will return. Yes, Catherine Doe and her husband Joseph have taken it over and the first issue promises to be a good one. The Valley Voice office is in the Montgomery Square building on Main Street. There will be various rack locations for the paper throughout Visalia and hopefully beyond.  Best of luck Catherine and Joseph. The return issue is sure to be a keepsake, so make sure you get yours!

Taylor's Hot Dog Stand is a Visalia favorite and has a following even beyond local patrons. Established in Visalia in 1952 by Pauline "Ma" and Jimmy Taylor, and Jimmy's brother Kelly, the local landmark eatery moved from its original site next door to the O'Dell-Mor Apartments building to its new site across the street in 1984 (where it is now.) The Taylor’s Grandson Matt runs it now. Russ Dahler shot this pre-1984 photograph of the old building in all its glorious color. Thanks Russ.

Matt Kneeland Shares Family Photographs
Recently Matt Kneeland shared some pictures from his family’s album. Included here is a sample of the pictures. The first is a view southbound on Mooney Blvd.  at Freeway 198. Looks like freeway construction and

widening of Mooney Blvd. Note the drive-in on the left in the foreground—that is the building that we call Mearles. On the right is the COS campus. On the far right you can see part of the Motel Harlan sign. This photo appears  to have been taken around 1950. The second picture is of the Girls Athletic Association taken on the Mt. Whitney Campus in 1954. Nice letter sweaters! Thanks Matt for the great pictures. By the way, Matt believes most of the collection was taken by his grandfather, Dale Wooten.

***I just wrote a story for Lifestyle Magazine about Visalia's old Sweet building, the Link Brothers and some ghost sightings. Yes, I said ghosts! Check it out at    http://issuu.com/lifestylemagazine/docs/lifestyle_may_web. The article with photographs starts on page 20.

***The mystery of the old Visalia theater sign is still waiting to be solved, however, George Pilling who was one of the construction workers turning it into the Enchanted Playhouse, said that they did not replace the sign that was on the building during that transformation.

***The hanging tree mystery is also still waiting to be solved.

***Recently I received an inquiry from Kathi Hipwell Hash. She is trying to find 2 family related pictures—one of Hash's market (on Giddings across from the Rawhide ballpark) and the second is Hipwell's Grocery. She believes Hipwell's was on Bridge Street. Can anyone help with these two photographs? We talked about Hash's some time back, but no photographs were found. Let me know.

***In the last HH I showed a photograph of a youngster’s band. Several of you, including Art Browning, Jim Drath and Rita Loffland Cooley identified the director of the band as a man named McCord. Thanks for that.

***I received a delightful email from Kay (Kathryn Kottmeier) Fleming and she shared some wonderful memories including a mention of a Visalia hangout called the "BBQ" located on Main at Willis, I believe. She had great memories of this drive-in. Anyone have any pictures? Thanks Kay for staying in touch.

A Visalia traveler related this to a newspaperman, "A number of immigrant families from Arkansas have lately settled near Visalia. They are the bone and sinew which one day will make this valley the garden spot of the lower country. Several families from Los Angeles are also among the settlers upon the banks of the Four Creeks. Game is very abundant, and easily obtained. Grizzly bears make frequent visits to the tule swamps, where they are easily trapped." Sacramento Daily Union, November 20, 1856
Posted at 9:30 PM No comments:
Email ThisBlogThis!Share to TwitterShare to FacebookShare to Pinterest
Newer Posts Older Posts Home
Subscribe to: Posts (Atom)