Click on photo for larger image
Thanks for visiting Historic Happenings! If you are not on the email list, and would like to be notified via email when a new posting of this newsletter is made, please email Terry Ommen at histerry@comcast.net. I will add you to the list. I will never share your email address with anyone without your permission.    NOTICE: You can now comment publicly and directly about topics on this blog. Just click on the "Comments" after the "Say What" portion and let your voice be heard!

Congratulations Jaime Hitchcock for being the first to correctly identify last month's mystery spot. The beautiful windows that you saw were part of the 1908 German Evangelical Lutheran Grace Church building located on the northeast corner of Court and Sequoia streets. The beautiful old building is still standing and is being well-cared for. By the way, it is still a church. Again Jaime, thanks again for a quick correct answer.

OK, here are the clues for the next one.
1)  The building reportedly dates back to at least 1914.
2) This building was an auto repair shop for virtually all of its life.
3) The name associated with this building was a well-known family and the family name is still connected to it.
4) The last business operating there closed in 2009.
Where is this building? Good luck. 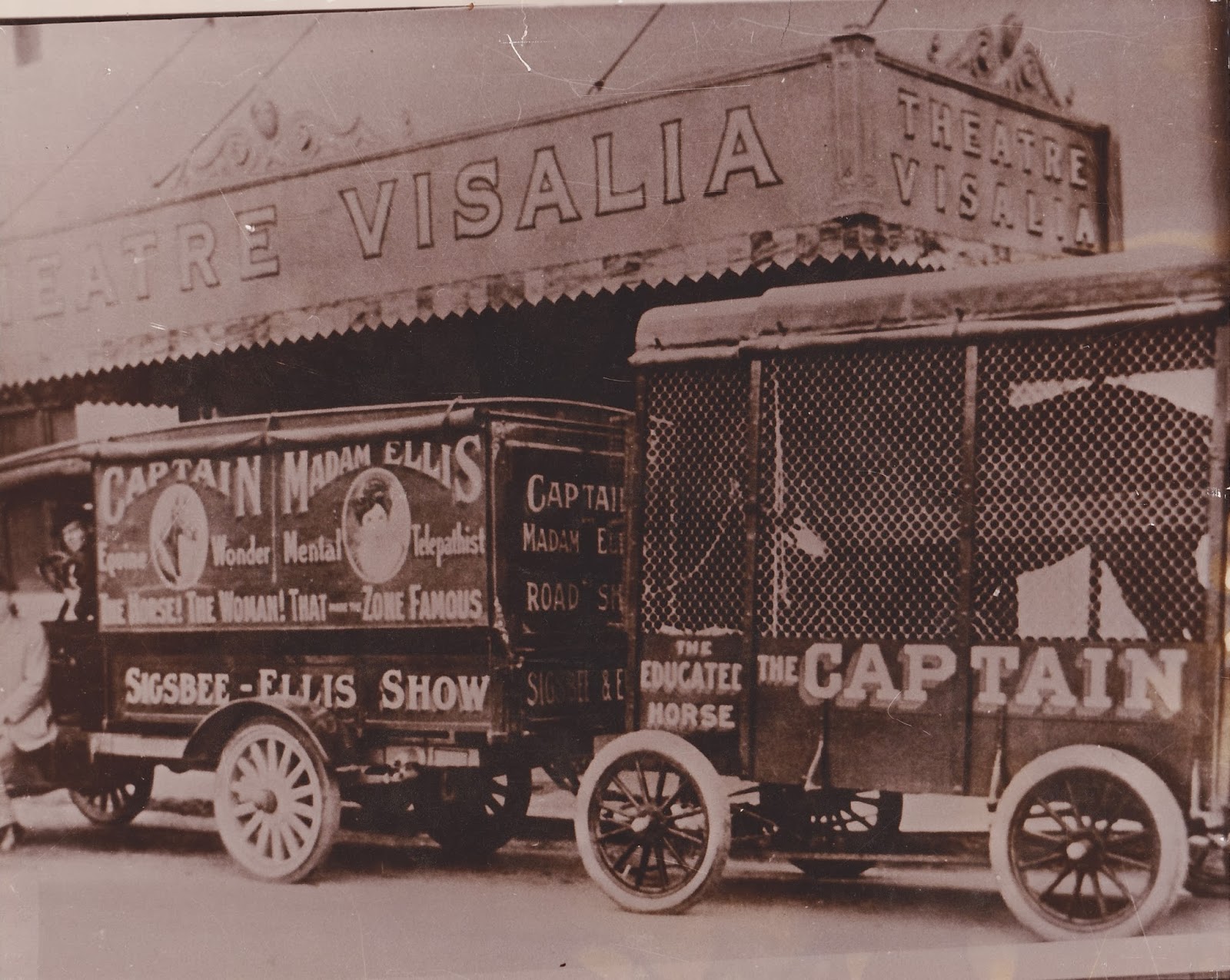 Theatre Visalia—A Wonderful Entertainment Venue
Wayne Yada sure brought back memories for me. He recently shared this photograph and as soon as I saw it I remembered it as one of the first historic Visalia photographs I had ever seen. It was and is a fascinating picture showing the marquee of Theatre Visalia as the backdrop with vehicles of the Sigsbee-Ellis Road Show parked in front. So many interesting aspects to this picture. Captain, the educated horse and Madam Ellis, a mental telepathist, as you can see are boldly advertised on the highly decorated vehicles. I believe this photo to be circa 1920. The old Theatre Visalia was torn down in the early 1930s. Thanks Wayne for sharing, and thanks to the Ingram family who had this photograph. 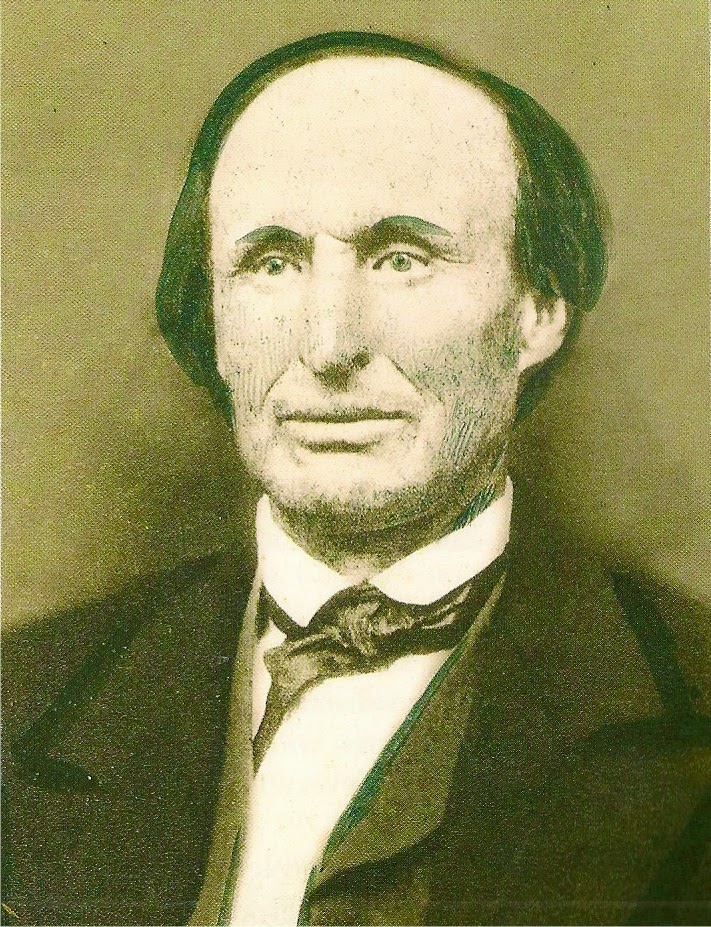 In 2013 a new book with a strong Visalia connection was released called Colonel Baker's Field—An American Pioneer Story. It was written by Judy Salamacha and Sandy Mittelsteadt with Chris Brewer a major contributor. Beautifully illustrated by Salamacha-Hollier, the book is an interesting look at Thomas Baker, the namesake for the Kern County town of Bakersfield. Baker was an important pioneer in Visalia and was here when Visalia first began. It is hard to imagine a more interesting early figure in Visalia history. Baker left Visalia and is the founder of Bakersfield. The book is available at the Book Garden in Exeter, and  by the way Chris Brewer is the great great grandson of Colonel Baker. I'm glad to have this book as part of my library. Again, the Book Garden in Exeter has it. 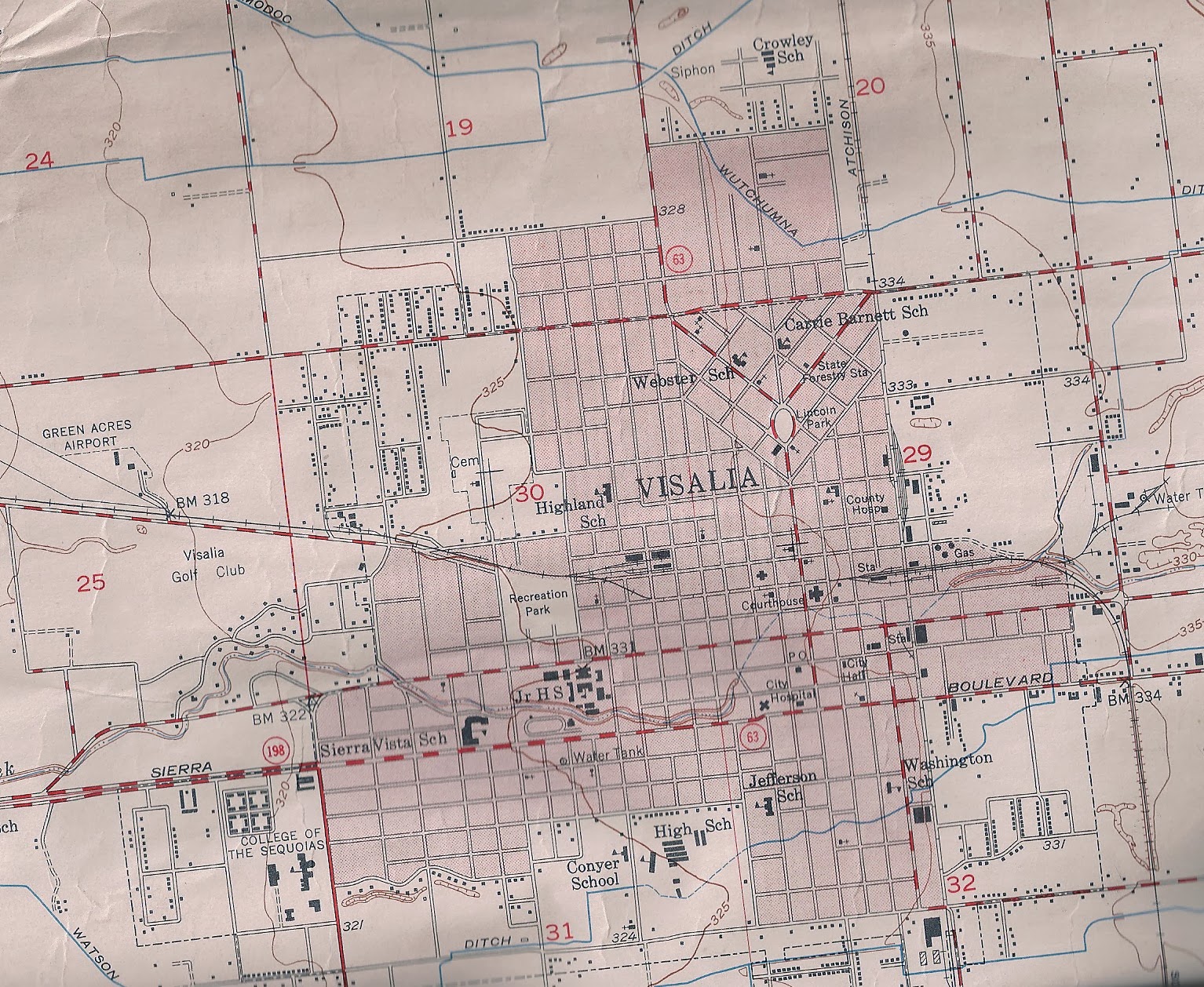 A Look Back to 1950 Visalia
In 1950 Visalia had a population of slightly less than 12,000 people. It looked a lot different then compared to now. Recently Alan George came across this 1950 topographical map of Visalia and the surrounding area, published by the U. S. Department of Interior Geological Survey. It's a very interesting map showing Sierra Blvd (now Mineral King Ave), various schools and the Tulare county hospital near Bridge and Murray streets. This is Visalia 64 years ago, and is pretty amazing. Visalia now has a population of over 125,000 and many of the schools you see on this map are gone.  By the way, the map is stamped with Togni Branch Stationers, Visalia—the place it was purchased. Thanks Alan for the historic trip back in time.

Melody Kids on Stage at Theatre Visalia
Speaking of Theatre Visalia, Lavene McWhorter Douglas recently share this great old (circa 1925) photograph. It was taken on the stage of the old theater which I indicated earlier no longer exists. It 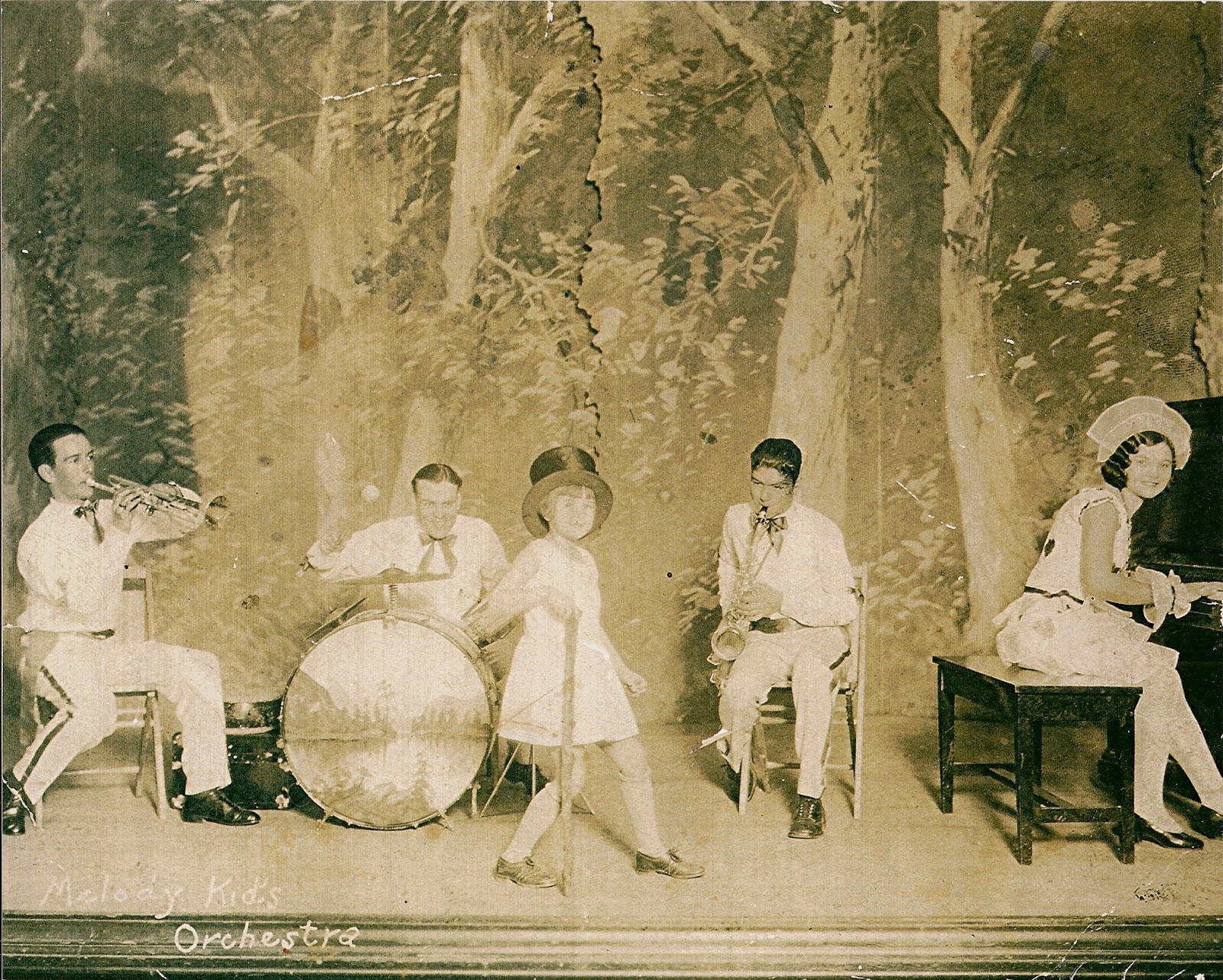 was located on the northeast corner of Court and Acequia streets (now a parking lot). The photo is captioned "Melody Kids Orchestra" and the cute little girl in the front is Lavene at about age 8. The remainder of the group is identified as follows: (L-R) Leland Stokes (trumpet), Ernie Caldwell (drums, possible last name of Rutledge), Johnny Clore (saxophone), Delia Clore Ayers (piano). By the way, this theater was Visalia's first Fox owned theater. Lavene, thanks for the picture.

A Plunge Photograph!  Could it be?
A couple of months ago, Paul Thomas asked about a swimming pool he remembered on S. Bridge Street across from what is now the Convention Center/City Hall complex. I knew based on previous research that there was a pool near that location called "The Plunge," but unfortunately, I had never seen a photograph of it. Well, guess what? I believe we now have a "plunge" picture. It came from Margaret Schultz as part of her father's photograph collection. Her father's name was Albert Stroben. It was not labeled, but I believe it to be the famous swimming pool in Visalia called "The Plunge." I need to hear from some of you old-timers. Can you confirm that this photo was in fact "The Plunge?" If it is, it is a pretty rare photo. Paul, I would especially like to hear from you. I'm sure this popular summer spot dates back to the 1940s, although this photo looks more recent. The printing on the back fence of the photo says "Keep Off  the Fence." Thanks, Margaret for sharing.

***If you'd like to learn more about Visalia's Bank of Italy building on Main Street, get a January 2014 copy of Lifestyle Magazine. Or you can read about it online at http://issuu.com/lifestylemagazine/docs/lifestyle_jan_web

***A number of you offered Paul Spencer your best thoughts on the bar/card room that he was inquiring about in the last posing of HH. Seems like the Wunder or the Stag is the consensus for the name of the bar and card room.

***Dana Lubich commented on the big antenna/tower near Walnut and Woodland. He said his friend Jim Pardue, who lived in Visalia in the 1950s has story to tell. According to Dana, "He used to climb all the way up the tower with friends and would feel the 'sway' at the top. He thought he was safe that far up, so that his mother wouldn't hear him, but one day his voice was carried down to her, and he was in trouble. In '62/'63 he painted a sign of a local gang's symbol (harmless compared to today), and which he didn't even belong to—on a bed sheet, and hung it from the tower. The next day a photo ended up in the Times-Delta!"


***Dan Veyna discovered a number of years ago, that the  story of the Visalia Saddle  had a far reach. He came across a saddle shop in Vale, Oregon and there he found Visalia Saddle memorabilia and people who knew about our famous saddle.

***Marian Shippey Cote, one of the best genealogy detectives I know, did some very helpful searching under the name Samstag who by the way was another famous Visalia Saddle maker.

How A Woman Kisses A Tobacco Chewer—Did you ever see a woman do it? Did you ever see a woman kiss a tobacco chewer? This is the way: There is a preliminary shudder, and then she sets her teeth hard, holds her breath, and makes a little pigeon dip at the foul lips of the grinning beast, and then, pale with horror, flies to the kitchen, where, if you follow her, you will find her disinfecting with soap and water. Many of the blessed little hypocrites pretend that they like the smell of a cigar; but even hypocrisy is powerless to force from a woman the confession of a fondness for hanging, "like a bee upon the flower," on the lips of a tobacco chewer.  Visalia Weekly Delta, June 30, 1882
Posted at 4:11 PM No comments:
Email ThisBlogThis!Share to TwitterShare to FacebookShare to Pinterest
Newer Posts Older Posts Home
Subscribe to: Posts (Atom)