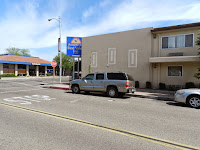 Congratulations to Virginia Strawser who was the first to correctly identify last month's mystery spot. It was of course the motel at the corner of Johnson and Main streets—a motel that has been there for many years. It is has had several names over the years and is now America's Best Value Inn.

If you're ready for the next mystery spot, here are the clues:
1) It is an overcrossing of Mill Creek. (Hint: Mill Creek as you know goes under Main Street in several spots in downtown Visalia, but this crossing has the creek exposed on either side of it.
2) This overcrossing was constructed by Thompson Brothers, Central Contractors, Fresno Cal and has that marking on it.
3) It is near a park.
4) It is surrounded by oak trees.
Where is it? Good luck.

Mt. Whitney Power Company—At Its Home On Court
Bruce Geiger found this nice old photograph showing a view looking north on Court Street from about Acequia. Taken in about 1910, it shows Mt. Whitney Power Company when it leased office space in the S. C. Brown building on the east side of Court. In 1912 Mt. Whitney Power built a new building on W. Main Street (where Quality Jewelers is now.) In this photograph you can see adjacent to the Brown to the left, the Harrell Building. And and to the left of that on the same side of the street, but across Main is the Palace Hotel. Notice the evidence of transition from horse and buggy to automobile. Nice find, Bruce!

Sandy Newman found an interesting piece of history lately and wanted to share it. It is an original 1939-1940 Public School Directory for Tulare County which includes Visalia. Visalia schools are listed by name as well as teachers, and it even gives their home addresses. There are some other tidbits of local school information included as well. Only 3 of the 7 school listed in this booklet are still with us today. They others are gone. Do you recognize the names of any of the teachers or administrators mentioned here? Thanks, Sandy for sharing. 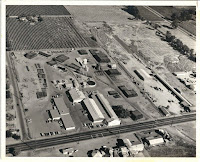 Edison Pole Yard
Marian Shippey Cote found this very interesting aerial photo in her family possessions of the Southern California Edison Company "pole yard." It was located on Ben Maddox at Goshen Ave. After Edison vacated this site, the land sat vacant for a number of years and is now occupied at least in part by Sonic, the fast food drive-in. By the way, Mt. Whitney Power Co. was bought by Southern California Edison many years ago. Marian tells us that her father worked at this pole yard as a "mapper." It doesn’t look like Goshen Ave went through when this picture was taken. Thanks, Marian, for sharing.

was not named for the towns of Tipton or Lindsay. The school in fact was named after a pioneering and prominent school official named Tipton Lindsey. Built in 1891 at Oak and Locust streets, the school was poorly constructed and in 1916 it was deemed unsafe for students. As the future of the abandoned site was being discussed, citizens of Visalia fought hard to make sure the City of Visalia acquired it for a future city library. Their wish came true and the city did buy it, and in 1936 the Visalia City Library was built there. 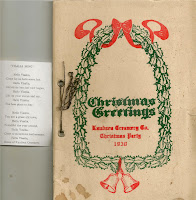 Sandy Newman shared this Knudsen Christmas Greetings/Party songbook for 1930. In it are the lyrics to a song called the "Visalia Song." Anyone have the music to go with these lyrics? Thanks, Sandy, for sharing.

***Hugh Baca is looking for a photograph of his dad's grandfather, a man named Harold Santos Baca. Harold lived most of his life in the Porterville area. If anyone can help with a photograph, I know Hugh would be appreciative

***Peter Cowper mentioned that when he was a youngster he would go into Cross Horlock Hardware store and recalled that when he walked on the wood floor, it would "give" under his weight, and the glassware and general merchandise in the display cases would rattle. It's an interesting observation and I remember the same thing. Those hardwood floors would tend to creak and loosen up and there would be a little shaking and rattling going on with the display cases nearby. Are there any of those floors around anymore in Visalia.

***Speaking of the Hyde Ranch, Charlene Langdon Cates passed along that her grandparents Ernest and Alta Langdon lived on the Hyde ranch for over 50 years, and she and her parents lived there also for a few years. Her folks, as you may recall, owned the Langdon Electric Motor & Pump Co. at 410 E. Main , then moved to 910 E. Acequia.

***I thought we had the sugar beet factory location mystery solved. Information came that it looked like it had been at Tulare and Bridge streets, but 94-year old Betty Treaster, who lived just south of Visalia, remembers seeing the abandoned buildings at the K Road/Santa Fe location. She recalls the abandoned buildings being referred to as the "old sugar beet plant" by old timers.

***For those who would like to read about Anna May Bell, a bright young Visalia girl in our history, be sure to pick up a copy of the April 2015 Lifestyle Magazine and go to page 12. Or you can go online and read it at http://issuu.com/lifestylemagazine/docs/lifestyle_april15_web

Facing national prohibition, the local newspaper asked: Announcement is made that 60,000 tons of ice have been placed in cold storage for next July. What good will ice be in the month of July when all the cocktails and high-ball making places have gone out of business?" Visalia Morning Delta, May 13, 1919
Posted at 2:59 PM No comments:
Email ThisBlogThis!Share to TwitterShare to FacebookShare to Pinterest
Newer Posts Older Posts Home
Subscribe to: Posts (Atom)