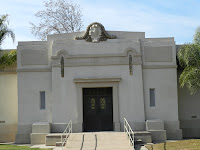 Well, you asked for harder Mystery Spots and this is one! The last MS was the mausoleum building at the Visalia Cemetery. I knew it was going to be tough. Kim Gunter suggested it, so don’t blame me! Only two people got it correct—the first was Bill Allen and the second was Dallas Pattee. Congratulations to the both of you and thanks Kim for the good suggestion. 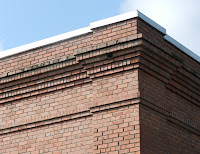 This next one is probably easier. Here are the clues:
1) This building is near the street that was named for a Visalian who was closely associated to this building.
2) It was built after 1920.
3) A number of local power players had a connection to this building.
4) It is located at a major intersection.
Good luck! 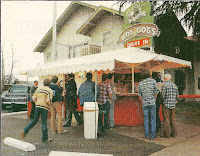 Taylors—Ma Taylor Called Them the Best Wienies in Town!
Taylor’s Hot Dog stand has been a Visalia landmark since 1952...that’s 60 years. The stand was operated by Jim and Pauline (Ma Taylor) for many years and is still in the family. I remember lots of conversations with May Taylor about what she called their famous “wienies”. So many people have enjoyed, and are still enjoying those famous chili hotdogs. Joseph Vicenti is wondering what happened to the old Taylors Hot Dog stand building that stood across the street from the current stand. The earlier smaller building stood on a concrete pad in the rear portion of the lot on the northwest corner of Encina and Center. Here is a picture of it. There was talk of donating the old building to the museum, but that did not happen. Anyone know what happened to it? 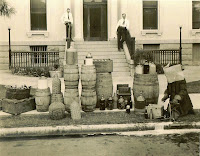 When Liquor Flowed Freely, But Not Free
George Reece recently shared with me some of his experiences as a state liquor control officer in the 1950s. George is a native Visalian and has extensive experience as a peace officer here. Tulare County has quite a history with illegal alcohol production. Here is a one of my favorites photographs of seized moonshine and related paraphernalia on display in front of the Tulare County jail in Visalia. Obviously, this is before George’s time, and probably from the 1920s. Thanks George for reminding us of our strong historic connection to the devil’s brew.

Recently, I had an inquiry about Visalia’s old Jefferson School which was located at Encina and Myrtle. It was built in about 1917, closed in 1966 and demolished in 1967. The cupola (dome) on top of the building was a part of its unique appearance. If you look carefully on the south side of Laurelwood, the well-known home at Giddings and Laurel, you can see the cupola as a decoration piece in the backyard there. It is a nice piece of history, saved photographically by the Visalia Times-Delta on September 21, 1967.

Visalia Municipal Auto Camp
In 1917, the City of Visalia had a free public auto camp on the southwest corner of Bridge and Acequia, about where the convention center is now. In about 1926, it was closed to campers and turned over to “Hustling” Hiram Hill, the manager of the Sierra Park. It was hard to maintain and keep clean, and Hill turned it into a “pay” campground. If you look though the trees you can see part of the Visalia Municipal Auditorium on Acequia. Auto camps like this were very popular in the early 1900s and many towns had them.

First Visalia High School Building
In 1897 Visalia’s first structure dedicated exclusively to the education of high school students opened its doors. It was an impressive looking structure located in what we now call the Lincoln Oval Park. It remained the high school until the new Visalia High was built in 1911, where Redwood is now. After the oval high school was discontinued as a high school, it continued as Lincoln Grammar School. Obviously poorly constructed, it was demolished in 1922, after standing only about 25 years. High school students before 1897 had classes in the upstairs of the Tipton Lindsey School.

*** Sue Gunderman has asked a question. She recalls a rather well known rock band that visited Visalia in the 1960s but can’t remember the group’s name. She believes the concert was at Recreation Park. She would like our help, so, if you remember any rock band from the 60s or even later, that came to Visalia, please let me know. Let’s get a list for her and keep it for the historical record. Was it the Beatles Sue?

***Robert Herndon is researching material for a Tulare County history book that will focus on subjects that fall in the category of “obscure Tulare County history. For example, he is looking into the Redbanks Hotel east of Visalia…a place that he says Mae West visited. He is also looking into the mysterious “Noble” street house, whose porch light never went out. He said, “There were many stories about the house and, of course, many claimed it was haunted. I last visited the home’s interior in November of 1989. For many years, the back door remained unlocked and although the house was frequented by people, it was never damaged. Inside, the scene reminded me of a shipwreck. There were coffee cups and plates on the table, a Times-Delta newspaper from the 1970s and clothes in the closets.” Sounds interesting Robert, good luck on your research and we look forward to reading your book.

***It has come to my attention that at least a couple of Visalia attorneys lobbied for Robert Brandt (Janet Leigh’s fourth and final husband) in support of him getting development rights to Mineral King ( 1960s and 70s ). This was going on about the same time that Disney wanted to build a ski resort up there. Does anyone know why Robert Brandt was being considered for approval of a ski resort in Mineral King? Could he have been an agent for someone else?

***With all the talk about the SPCA and the new facility being planned, Gary Holder has passed along that the site of the current SPCA was the location of a gun club in the 1950s. Near that site was also the Lazy A Ranch.

***Wayne Drouillard found an interesting little historical Visalia tidbit while doing some research. Harriet Eureka Drouillard, Wayne’s grand aunt, returned to Visalia for the July 4th parade in 1895. At the time of the parade she had been living in Bakersfield. She returned to Visalia as Mrs. Charles Keller. According to her she was the “first white child” born in Visalia, which would have been in the mid 1850s.

***Nancy Loliva who works with the City of Visalia wants you to know that the city has a new Facebook page and occasionally it has historic preservation news. You can go to the site at http://www.facebook.com/pages/City-of-Visalia-CA/193880147346796  and she hopes when you visit you will click on “like” near the top.

Exactly 108 gaily painted bungalows, many fitted with plate glass windows, some boasting fireplaces, others having private baths and all wired with electric lights are soon to be added to the residence district of this city. These habitations are divided into two and three rooms each, every one has a special housekeeper and all are on wheels. They will not be “For Rent” for the landlords filled them almost immediately after this year’s spring house cleaning. The “bungalows” form the homes of the Ringling Brothers’ circus menagerie, which is to exhibit here Friday, September 7. Visalia Daily Times, August 30, 1917
Posted at 8:17 AM No comments:
Email ThisBlogThis!Share to TwitterShare to FacebookShare to Pinterest
Newer Posts Older Posts Home
Subscribe to: Posts (Atom)