Nice work Jaime! Jaime Hitchcock was the first person to correctly identify the mystery spot as the old Boy Scout building now housing Ameriprise at 221 No. Encina (Oak and Encina.) The glass blocks were the obvious giveaway and are clearly a unique feature of this building. The majority of you that correctly identified it remembered the building as the Visalia Boy Scout office of some years ago.

Now for the next mystery spot. Here are your clues:
1. This building seems out of place in the downtown area.
2. It dates back to about 1923.
3. There are more than one of these in Visalia.
4. It is located near the street that was named for the family of the builder.
Where is this building? Good luck.

I received this information from Bill Adair. Roeben Road or Street as it is called now is named for William "Bill" Roeben. He was born in Germany and settled in Texas. He married Antonia Vogelsang and the couple moved to Visalia in 1903 and farmed west of town.

Visalia Theater Sign in Pizza Parlor
Patrick Barszcz recently sent me this picture. He saw it on display at the Planing Mill Pizza Shop at 514 E. Main Street and apparently the sign came from the old Visalia Theater which opened in 1949. Is this the old original theater sign? Maybe a replica was put up when the Enchanted 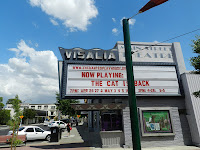 Playhouse took over? Anyone know the story of the sign switch? 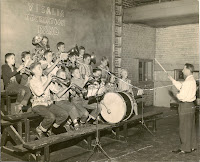 Recently I was presented with this photograph. As you can see printed above the band members is Visalia Recreation Band. The band members and band director are unnamed. Surely this circa 1955 photograph has recognizable people. Can anyone help? 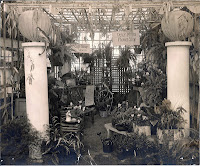 No Wilting of Peter Perkins' Flowers

Several of you recently mentioned to me Peter Perkins Flower Shop. First of all Peter Perkins was an actual man. He opened his flower shop at 116 No. Court Street on October 17, 1914. The business is still operating in Visalia, although it has changed locations several times over the years and has a different owner. Next year Peter Perkins flowers will celebrate its 100th year in business. Quite an accomplishment! The first photo shows a Peter Perkins advertising display at the 1920 Visalia Fair. The second one shows the flower shop when it was located at Floral and Willow streets. I would love to hear some Peter Perkins Flower stories. Anyone know anything about Peter Perkins himself?

Recently I received a photograph, circa 1900, that shows Court Street with a view looking south near Oak. On the immediate right you can see the Templar's Hall building (balcony posts) with the Palace Hotel annex on the left in the foreground. Next to it is the actual Palace Hotel. The Harrell Building can be seen behind the Palace Hotel. On the right is the City Stable and the Visalia Times newspaper office. The man in the foreground looking back is unidentified. This photographic view is pretty rare. The second image is a current view from the same vantage point.

***I recently wrote a story about downtown Visalia which included Ken Schelling, an important personality in downtown history. Ken's insight into downtown is remarkable and very interesting. You can read the article in the April 2013 Lifestyle Magazine. It's a beautiful magazine and can also be found online  at  http://issuu.com/lifestylemagazine/docs/ls1304  The article is on page 40.

*** Regarding Robbin's Music store. Many of you remembered Robbins but remembered it at 300 So. Locust Street. Apparently it started on Main and later moved to Locust.

***I received this inquiry recently from a person who shared the following: "My family settled in the Visalia/Hanford area in the 1920s. My grandfather James Sweeney is in the biographical history. My grandfather Dilbeck worked in the Dodge garage on Main. I am trying to find the early Swedish owned bakery in Visalia It was owned and run by a Swedish family but I can't find early history including businesses. Bothof's website doesn't include history so not sure if that would be it." Can anyone help this person?

***Chad Holman also had an inquiry and asked about a so-called Visalia "hanging tree." According to the story he heard, the tree was used to "lynch" African Americans when Visalia had an active Ku Klux Klan. Anyone have any information about this hanging tree?

***J. C. Hickman, retired reporter and editor of the Visalia Times Delta inquired about the brass or bronze plaque that had been on the L. J. Williams Theater identifying the building as the original Montgomery Auditorium. I mentioned to him that I had seen the plaque several years ago, but he asked me to check to see if it was still there. I did, and found that the L. J. Williams Theater no longer had the plaque. I asked a school employee about it and they said it had been stolen several years ago, apparently a victim of metal thievery.

***In the last HH I mentioned the Visalia Vapor Trailers and indicated I heard that a history was being written about the organization. Anyone have a good "sand cast" aluminum window plaque? I'd love to share it with the rest of the HH readers. I am certain some still exists.

***Joseph Vicenti asked if anyone knew where the huge old Hyde Ranch Dairy milk bottle went after the dairy disappeared. The bottle weighed just over 1 ton!

***Visalia Heritage, Inc. wants everyone to visit their new blogsite and sign up for periodic postings. It sure looks nice. Check it out at www.visaliaheritage.blogspot.com

***I'm glad several of you were able to identify relatives in the old track photo that was in last HH. Always fun to see recognizable faces in old photographs.

“The plan of giving nickel dances will be followed at the Steuben hall hereafter on Saturday nights. That each dance will cost the gentlemen a 5-cent piece, and he can dance but once or as often as he pleases, provided he has a sufficient number of 'five centses.' This plan has been followed with much success elsewhere.” Visalia Morning Delta, April 7, 1909
Posted at 9:44 PM No comments:
Email ThisBlogThis!Share to TwitterShare to FacebookShare to Pinterest
Newer Posts Older Posts Home
Subscribe to: Posts (Atom)