Boy,  did I hear from a number of you complaining that the mystery spots have been too easy. Ok, I will try to “toughen” them up a bit. Anyway, many of you correctly identified the last MS as the L. J. Williams Theater on Main St. on the Redwood campus. Peter Cowper was Johnny-on-the-spot and was the first to get it right. Peter is a consistently observant HH follower. Good work, Peter! 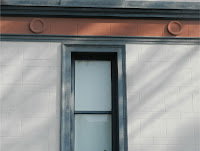 Interior Picture of a Visalia Post Office
Recently, Sharon Doughty came upon a treasure trove of family photos. One of the photographs in the group shows Visalia postal workers posing inside the Visalia Post Office. Her grandfather, Edmund Kevol Downing is shown here 4th from the right, and the photograph is marked “about 1910.”  In 1910 the post office was located at 110 W. Main Street and in 1914 it moved to the Merryman Building at 121 W. Main. Very few interior photos of our early post offices exist, so this is a great find. There is some interesting signage in the photo and the postmaster’s office is on the right. Thanks for sharing this one with us, Sharon. 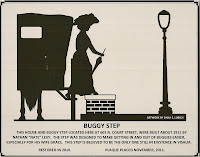 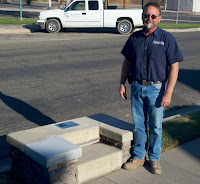 The final act in the restoration of the last known buggy step in Visalia is complete. A commemorative plaque with artwork by Dana Lubich was mounted on the buggy step by Rick Seals of Seals/Biehle Construction on November 4, 2011. This project which included restoring the damaged step and the purchase of the plaque was funded by a number of generous people. Thanks to all of you who played a part. Stop by and see the step with plaque on NW 1st just west of Court. This is a great remnant of horse and buggy days.

As 2011 comes to a close and we reflect back on the lives of two important people who loved Visalia and Visalia history. Jane Higgins Nash passed away on September 30th , about two months after her husband of 60 plus years. Both Bill and Jane knew Visalia history and the people that made it happen. When I had a history question, I always got a “2-fer” when I called Jane. Bill would almost always offer his recollections. Both Jane and Bill will be missed! 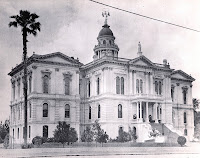 In 1876-1877, the Tulare County Court-house was built in Visalia in Court-house Square (the block bounded by Oak, Court, Center and Church streets.) The beautiful building was the centerpiece of civic activity in Visalia for many years. In 1952, the major Tehachapi earthquake damaged the old structure making it uninhabitable. It had to be demolished. This rare photograph, shared by Tim Fosberg, shows some of the demolition of the building. The photo is marked November 11, 1952. Notice the fancy ornamentation on the old structure. It was a shame we had to lose it. Thanks, Tim for sharing a great photo.

Visalia Centennial – 1874-1974
Jon Greeson visited his grandmother recently and she shared with him some local treasurers she had kept over the years. One of them was an unopened bottle of Zinfandel wine from the California Growers Winery in Cutler. It was made for the 1874-1974 Visalia Centennial celebration. At the March 2, 1974 grand ball, Les Brown and his orchestra performed and he signed the wine label. By the way, Visalia has had several centennial celebrations. In this case, 1874 was recognized as the second incorporation of the city. Was 1974 a good year for wine? We’ll never know because Jon has no plans to open the bottle.
The Chinese Experience in Visalia

We know Chinese people have been living in Visalia for over 150 years. During that time they prospered and struggled and at one time Visalia had a thriving Chinatown. On Monday December 12th from 7-8:30pm there will be a historical program called “The Chinese Experience in Visalia” at the 210 Café sponsored by the popular hangout and the Visalia Times Delta. It is part of a series of programs called 210 Connect and is designed to engage the community and create a community dialog. You will be hearing and reading more about it in the Visalia Times Delta as the date gets closer.  Plan to attend as topics will include Chinese merchants, Exclusionary acts, interesting characters and the opium dens/tunnels of old Chinatown.  What a great time to share your Chinatown stories.

***One of the benefits of having so many HH followers is that errors can be found more easily. One of the HH eagle-eyes is Art Browning who found that in a past issue of HH, I incorrectly identified KTKC on an aerial photograph. The station was actually on Woodland Ave outside of the view of this picture.  Thanks Art and if my memory serves me correctly Peter Cowper mentioned that error to me as well.
***I am still waiting to hear about a plan for the “Free Library” granite block that recently was found. I still like the idea of using it as part of a bench on the library grounds or on Main Street near where the old Carnegie Library stood. It would be a shame to not use it in some interesting and creative way.
***Chriss Courtney Laursen remembers the Buster Brown Shoe Store on Main Street just east of the Fox Theatre on the north side of the street. She remembers that the shop, located there in the 1950s or 1960s,  had an x-ray machine that showed how well the shoes fit your foot. Anyone else remember the x-ray machine?
***Tom Rey remembers the famous Estrada’s Restaurant. His Aunt Dorothy went to school with the Estrada girls and later married James A. Flower, M. D. of Detroit. Tom said, “Aunt Dorothy would stop for tamales every time she visited and between visits she would have them shipped…back to Detroit.” Tom also ate at Estrada’s and said he never had a bad meal there.
***I write a regular monthly column in the Valley Voice called “Voices From Four Creeks Country.” The latest column highlights Lee Atwell, a Visalia man who went on to perform on New York’s Broadway and became a recognizable stage actor in the early 1900s. See his interesting story at
http://www.valleyvoicenewspaper.com/fourcreeks/2011/fourcreeks120111_1229.htm

…The dogs about this town are rapidly becoming an unbearable nuisance. The yelping, howling, and snarling, from dark till daylight, are more suggestive of Pandemonium than of the quiet which ought to prevail in a country town during the dark hours. Let it be stopped. We hear loud threats of indiscriminate application of strychnine, but we hope they will not be carried out, at least without due warning, as what few good animals there are, would be apt to get it as worthless cure. Dogs worth keeping are worth keeping at home o’nights.  Visalia Delta, October 23, 1862.
Posted at 7:43 PM No comments:
Email ThisBlogThis!Share to TwitterShare to FacebookShare to Pinterest
Newer Posts Older Posts Home
Subscribe to: Posts (Atom)