Wow, did Russ Dahler get the last mystery spot quickly. He was the first and I’m sure it is related to his work on the research committee for the Fox Theatre book some years ago. As many of you know, the mystery spot was the small window on the east wall of the Fox. Congratulations Russ.

Okay, the clues for the next mystery spot are…
1.  This building houses a retail store.
2.  The business has been at this location since 1966.
3.  Planning an outdoor adventure? You’ll definitely want to visit this business.
4.  The building has one of the biggest neon signs in Visalia.
What building is it? Good luck!

McDonald’s Drive-In—A Hot Spot in Visalia
In a recent posting of HH, we talked about the McDonald’s Café on Main Street across the street from the Fox Theatre. Recently, Phil Kneeland, a 1957 Redwood graduate, mentioned that the McDonald’s Drive-In on the southeast corner of Floral and Center was also a hotspot. He shared that the drive-in was the turnaround spot for “dragging” Main. He said, “We drove through that parking lot to wave at friends that were parked there either having a burger and cherry soda or because that was an easy  way of saving money. It was a good place to hangout if you were out of gas money. You could see all of your buddies that were on the ‘drag.’ We spent many a night ‘dragging Main’ with a carload of buddies or your girlfriend at your side. We’d flip a ‘u-ie’ at the east end of Main at the Santa Fe tracks or go up No. Court and around the ‘Oval’ and back again. Dragging ‘in town’ meant a slow cruise down Main (when Main was a two-way street) with the occasional high speed run from one stop light to another.”

These were fun memories for Phil, and I’m sure others as well. Phil, I cannot find any photographs of the drive-in. Can anyone help? I seem to recall someone talking to me about the possibility of a drive-in photo in an old yearbook. Let me know if anyone can help. 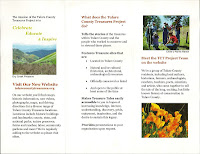 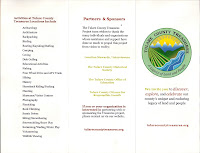 For the past year or so, a group of Tulare County volunteers have been working on what they call the Tulare County Treasures Project (TCTP). The group formed thanks to Laurie Schwaller who had this great idea. The mission of the Tulare County Treasures Project is to Celebrate, Educate and Inspire by telling the stories of the diverse places that have been conserved in our county and of the visionary people who have worked to protect and steward them. The group has big plans and the website is really the first major step in the further development of the TCTP. Here is the tri-fold brochure with more information. We are looking for people who want to get involved. There are various ways to do that, so let us know of your interest. You won’t be disappointed. It’s fun and really highlights Tulare County as an amazing place. By the way, Visalia has many “treasures” and they will be included also. Please visit the website at www.tularecountytreasures.org.

Donna Capron Wilson, granddaughter of former Visalia Police Chief Jim Fluty wanted to share another one of her photos. This one is really a panorama photograph from the 1957 reunion of the Visalia Unified High School Class of 1941. There are so many people in this photo, you’re sure to recognize someone. In fact, you might even be in it yourself or maybe a family member. Let me know if you recognize anyone and share something about them. Thanks, Donna for sharing this great photo. 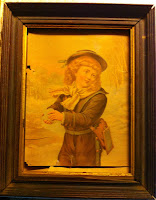 History Can Be Found in the Most Unlikely Places
We all know that history can be found in pictures, right? But here is a new twist. Jon Greeson found something interesting recently as he was cleaning out his grandmother’s garage. He spotted an old picture frame with a beaten up image of a school boy mounted inside. As he dismantled the frame, several layers of backing came out, a couple of which were pieces of Visalia memorabilia. One of these pieces was a partial 1910 calendar for L. A. Dollner. Lewis Dollner was in the jewelry business for many years in Visalia and at one time had his store at 125 E. Main. Thanks Jon for your garage archeology and sharing your find.

***In the last HH I included a section dealing with former Police Chief Jim Fluty and in that section his granddaughter provided a photograph of an emergency unit (panel truck) for the sheriff’s department. The truck was pictured in front of the Depot Restaurant and I now know the identification of the man standing by the sheriff’s unit. He is Deputy George E. Tockstein. Anyone know the name? He would have been a TC deputy sheriff in the 1950s.

***Recently we received this good news from Paul Fry, manager of the Fox Theatre, “Wanted to inform you of some upcoming good news. Today I was checking the website of the State of California Office of Historic Places and the Visalia Fox Theatre is on their scheduled for February 8, 2013 to be nominated to the National Register of Historic places. The actual agenda will not be published until late January 2013.” Good news for one of Visalia’s “treasures.”

***Dustin Smith has a question. He writes, “I heard a story a while back about the remains of a little girl in an old wood coffin that was accidentally found some years back by an excavator on a construction project. It was found out by where Riggin Road is in Visalia. The story I heard was that she was sick and either lived or was briefly staying with a family that lived out there and due to flood waters they could not cross the river to get her to a doctor (by river, I assume they meant St. Johns). She ended up passing from her illness and they buried her out there. I suspect this would have taken place in the late 1800s or so. Do you know if there is any truth at all to this story? If so, do you know any details? Every time I am out around in the country on that side of town I wonder about that story being true, and would be very interested to know any details about it.” Sound familiar to anyone?

***In the last HH a mention was made about old school yearbooks being a good source of photographs. Sharon Doughty recalled, “At Conyer School about 1962 there were two classrooms for 6th grade. My teacher was Mrs. Reed (Reid) and my sister’s teacher was Mr. Rollins. Mr. Rollins’ hobby was photography and he created a yearbook. As I recall each page was mimeograph printed with information, and each book had photos that he produced and pasted into a book.” Does anyone have an old copy one of these Conyer School yearbooks? It sure would be nice to share some of those photos with our readers. Were pre-high school yearbooks common?

***History and art make a great combination and Arts Visalia now has an art exhibit called “Visalia Icons Now and Then.” Their gallery is located in the 1910 Visalia Cooperative Creamery building at 214 E. Oak. Some nice Visalia scenes here. For more information about this organization and this special exhibit go to www.artsvisalia.org. The exhibit runs through February 1, 2013.

***Dana Lubich announced that he has uploaded two videos he produced. One is the “Santa Fe Bridge Scrapbook” and the other is “From Mearles to The Habit—A Drive-In’s Odyssey.” He documented both the Santa Fe bridge construction and the transformation of Mearle’s to The Habit. They are now on  KVPT Channel 18’s website. They have a new section called “Valley PBS by You.” He invites everyone to look at this new feature and view his two projects online. To see them go to: http://valleypbs.org/byyou/index_exploration.php.

It is a fact that we have a milk wagon now running through the streets of Visalia. Mr. E. Smith will deliver milk to the citizens of the town every morning and evening. This astonishing enterprise in a “cow county” should be encouraged. Visalia Weekly Delta, February 18, 1860.
Posted at 10:59 AM No comments:
Email ThisBlogThis!Share to TwitterShare to FacebookShare to Pinterest
Newer Posts Older Posts Home
Subscribe to: Posts (Atom)