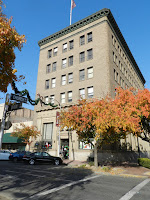 And we have a winner! Brent Nunes was the first to correctly identify the last mystery spot as the top decoration section of the old Bank of Italy building (now Bank of Sierra at Main and Church). Nice long distance identification, Brent!

Here is the next one. Your clues are:
1) It was a business that oftentimes went by the initials R.E.A.
2) Shipments of merchandise from this location generally went by rail.
3) It was located at an intersection.
4) This national company was started in 1917 and went out of business as a company in 1975.


What is this company name and where is the building?

The Granite Entrance to Cutler Park Or Is It?
Sally Saunders asked about the granite pillars at the entrance to Cutler Park. Does anyone know anything about them? I am
convinced they are original to the park and I would guess quarried at the Rocky Point Granite Works on Rocky Hill east of Exeter. Any concrete (no pun intended) information about them would be appreciated. By the way, the Cutler Park land was donated in 1919 to the county by John Cutler Jr. as parklands in his father's honor. The park was dedicated in 1921. Thanks for your question Sally, but after looking at these pillars, I'm wondering, are they really granite?


Painting by Ralph Homan Now at COS
On September 22, 2015, Richard Drath, along with his brother Jim, organized an event involving a painting to be displayed at the College of the Sequoias. The brothers had inherited the Ralph 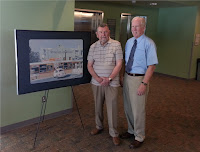 Homan painting from their parents and it just so happened to be an original oil painting of a local Visalia scene. Because Ralph was a long time art instructor at COS, and because the Drath's mom Helen had worked at the library at COS for quite some time, they decided to donate the painting to COS. On September 22nd the dedication event took place at the Learning Resource Center where the painting is now on permanent display. Ralph Homan was invited and is the man on the left in this photo, and Richard Drath is on the right. A nice honor for Ralph. Go by and take a look. Thanks Richard and Jim!

Two Newspapers Merge into One

Disney Becomes Part of the War Effort
Dana Lubich recently brought something to my attention—something I didn't realize. Many know that during World War II the Visalia Airport was home to a military bomber base (part of
Hammer Field out of Fresno). The unit was the 47th Bombardment Squadron, and Dana found that the unit had a patch or logo to represent them. That's interesting enough, but he found that the patch was created by Disney artists and actually found the patch displayed in a book called Disney Dons Dogtags: The Best of Disney Military Insignia from World War II. Apparently Disney artists were asked to create military patches for other units as well. Has anyone ever seen one of these? I'd love to see one. Thanks, Dana, for the neat historical tidbit. 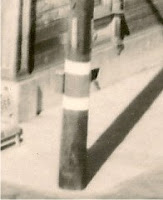 A Peak at a Fire Alarm Box
Eagle eye J. M. Bragg spotted something in the Masonic Lodge photo in the August 2015 posting of Historic Happenings. It is something that I believe no one else noticed on the wooden electrical pole. In that photo you will see two white horizontal stripes on the pole and J. M. believes that between these two lines was

mounted a fire alarm box. I have included here a close up of that electrical pole (sorry, it’s so blurry). Look closely and see if you think J. M. is correct. If he is, that fire box which was similar to the one shown here, is box #123 and is listed as mounted at Church and Center streets. J. M. remembers riding his bicycle to George McCann School as a youngster and feeling the urge to pull the alarm handle. Funny how sometimes delinquent habits follow one even through adulthood, huh J. M. ?

A Newspaper First
Recently, J. C. Hickman shared another fascinating newspaper replica, this one of Visalia's first newspaper. On June 25, 1859, the first Visalia newspaper was published with the fancy name of Tulare County Record and Fresno Examiner. It proclaimed that it was a politically independent publication and a "journal for the people." The owner was Isaac Carpenter. The masthead was eye catching and allegedly represented a scene on Main Street in Visalia with a Butterfield Stagecoach being pulled by a four-horse team. Also in the image is a sign that says "246 miles to San Francisco." This newspaper gave Visalia the bragging rights for having the earliest newspaper in the Southern San Joaquin Valley. Thanks J.C. for sharing another nice historical tidbit.

**If you would like to read about how the Visalia baseball team nearly killed Baseball Hall of Famer Frank Chance, pick up a copy of September 2015 Lifestyle Magazine. The article begins on page 12. Otherwise you can go online and read it at http://www.issuu.com/lifestylemagazine/docs/lifestyle_sep15_web

Another First in Visalia…"It was on July 4, 1858 that Mr. E. F. Warner received a consignment of fire crackers from Hornitos in Mariposa County. The man holds the distinction of making the first fire cracker noise in this city." Visalia Times, July 6, 1908
Posted at 8:39 PM No comments:
Email ThisBlogThis!Share to TwitterShare to FacebookShare to Pinterest
Newer Posts Older Posts Home
Subscribe to: Posts (Atom)