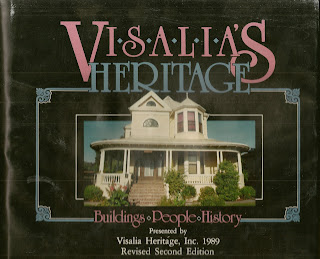 I have been asked by the owner of this book to offer it for sale. It is called Visalia's Heritage Buildings People History and was prepared by Visalia Heritage, Inc. in 1989. This is a hardcover book with dust jacket and is the revised 2nd edition. Beautiful book with no defects, just very slight wear on the dust jacket. This 175-page book is packed with photographs of homes and commercial buildings. This is a hard to find book and highly sought after. I have one and use it constantly. Fairly priced in this condition for $25.00. If you have and questions or would like to purchase this book, please email www.visaliahisterry@gmail.com or click on the above cover photo.
Posted at 10:26 AM No comments:
Email ThisBlogThis!Share to TwitterShare to FacebookShare to Pinterest

The Story of Tulare County and Visalia 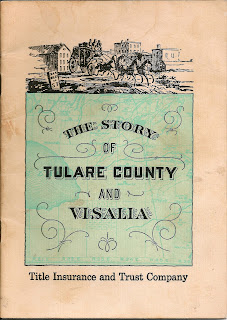 I have been asked by the owner of this book to offer it for sale. It is called The Story of Tulare County & Visalia and was prepared by the Title Insurance & Trust Company. This little soft cover book contains 36 pages with great history, maps and illustrations. About 5" x 7" , it is a classic little publication written by W. W. Robinson. This is the 4th printing, 1962. No damage or rips, just a little discoloration on the cover. A hard little book to find and I have one. I strongly recommend it. The price is $5.00. For questions or ordering information please email visaliahisterry@gmail.com or click on the above cover photo.
Posted at 9:19 AM No comments:
Email ThisBlogThis!Share to TwitterShare to FacebookShare to Pinterest 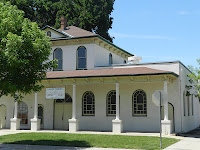 Congratulations to Carmen Bonilla for being the first to correctly identify the last mystery spot. It was the labor temple at the corner of Church and School streets, formerly Brooks Mortuary and before that it was the home of Superior Court Judge Wheaton Gray. Good job Carmen. Thanks to all of you who gave it a shot. Many of you got it right. 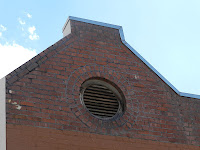 Okay, here are the clues for the next mystery spot.

1) Sometimes history repeats itself.
2) For many years the building housed a chain furniture store.
3) This building is in the heart of downtown Visalia.
4) The building also had an office supply store in it for a number of years.

Catherine Doe has been involved in family genealogy for a long time and she’s also a great historian. She tells me that Doe Ave, a street in the industrial park, was named for her grandmother, Florence Doe, who owned the property nearby.

Recently while visiting with Irma and George Cisneros, both local history fans too by the way, I saw these pictures framed in their home. I had never seen the photos before. Oh, I’ve seen lots of similar pictures of the old 1893 depot, but these two are from a different perspective. Both have stains as you can see, but regardless, they show some nice detail. The first one is a view looking east on Oak Street from just west of Church. Note the multiple train tracks and the fancy granite curbing that still borders courthouse square. I’d say this picture was taken about 1905. The second picture, taken I’d say about the same time, in this set also shows the depot but from a different angle and it shows the sign at the top of the building that says “Southern Pacific Freight and Passenger Station.” I’ve never seen that sign before. This building was replaced by the 1916 depot building that is now the Depot Restaurant. Thanks George and Irma, for sharing these great old pictures. 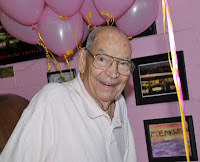 Yesterday, June 2, 2012 Mearle Heitzman, the namesake for Visalia’s famous Mearle’s College-In Drive In tuned 90 years old. Annie and Doug Silveria threw a birthday party for him at their ice cream shop called Mearle’s on Main Street. There was a birthday cake, a happy birthday song, and lots of fun as Mearle and his wife Marilyn enjoyed their many friends. Bill Dilberg, the professional photographer that is absolutely everywhere and very generous with his time and talent, was there to capture the moment. These two photos are from his camera. By the way, Mearle took over the Nielsen’s Drive-In in 1961 and kept it until 1995. The birthday party was Annie’s idea and it sure was a nice way to honor the man who was responsible for many memories for so many people for so long. Happy Birthday Mearle!

Conyer School traces its beginning to the early 1900s. It started out as a one-story brick building. Over the years buildings were added to the campus. The school was responsible for educating many children and one was Everett “Les” Thomson who shared this class photo from March 12, 1953. He was in kindergarten at the time and is in the front row, 7th from the left. I know the faces are small but who knows maybe you can spot more kids you recognize. Thanks Les for the nice class picture and reminding us of the school’s long history. 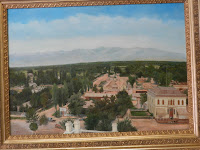 I recently visited City Hall West (Johnson and Acequia) and spotted this great old framed oil painting on the wall. For some reason I had never seen it before and it was a nice surprise. The artist, Frederick Bauer, created this image in 1885 and the view is looking east from the top of the old courthouse. In the foreground of this image, on the right, you can see the Masonic/IOOF Hall which sat on the northeast corner of Church and Center streets. To the left of the Hall is the future site of the 1893 S. P. Depot (where the Depot Restaurant is now.) Very few images exist showing this particular view and it was a good one to share. Again it is available for viewing in the public area of City Hall West. Go by and take a look at it. Much better to view in person.

The Kaweah Kollectors group is at it again! This time they are inviting everyone to a ceremony to honor Irma and George Cisneros and their beautiful circa 1870 Queen Anne home at 525 No. Court Street. On June 9, 2012 at 11:00am there will be a ceremony as part of a “This Place Matters” program and the home will be recognized for its historical importance to Visalia. At the same time the City of Visalia Historic Recognition program plaque will be unveiled. Over the years the home has had many owners, but E. O. Miller’s name has been the one most recognized. He was a prominent local attorney and businessman who also became a state senator. George and Irma have owned the home since 1981 and I can’t think of a better couple to care for this Visalia beauty. Hope you can make it next Saturday to this event. By the way the old image that you see is from a 1907 postcard and shows the Miller home on the far right.

***Susan Fawkes asked about Checker’s Drive-In restaurant which is located on Acequia near Kaweah Delta Hospital. She thought there might be some nice old history related to the building. I know a little about it, but not much. Can anyone share some history on the Checker’s building? Wasn’t it the Sno-White Drive In at one time?

***In the last HH there was question raised about the initials VMDA which appeared on an old local milk bottle. Sharon Collier seems to have found the answer and she found it on the internet. Apparently, it stands for Valley Milk Distributors Association. Thanks Sharon for that.

***Gina recently asked a cemetery question. She had heard there was another cemetery in Visalia before the existing one. She is absolutely right. Originally, Visalia cemetery was located in the area bounded by Murray, Locust, Race and Encina. In 1859, the cemetery was ordered moved. The bodies were exhumed and reburied. Did they find all the bodies? I doubt it. Be careful when digging in the area, you never know what you might find!

***Duane Davis is curious about the decorative ornaments on either side of the entrance to the downtown post office. They are interesting objects and he asks if anyone knows anything about them? By the way, they are original to the post office. It sure would be nice to know who the artist was that designed them. Another by the way, the cornerstone for that building was laid in December 1933.

*** In the last HH, Janzen’s Jewelry store was shown in one of the photographs and Jan Moffett recalled how impressed she was with the store’s “animated” displays in the front display windows. She particularly remembers the snow scene with little figures skiing downhill. This would have been before 1956. Anybody else have any Janzen memories?

***In the last HH the Rainbo Bread building was featured and so many of you commented about the wonderful bakery smells that floated over Visalia when the ovens were working. Hard to beat the smell of fresh baking, huh?

Lombardi, the Italian arrested at the instance of J. R. Coats and charged with discharging firearms in the city limits, was found not guilty by City Recorder Clack this morning. Lombardi’s defense was that a dog, which was later found to be one belonging to Coats, was engaged in chasing his chickens at the time. Judge Clack declared that a man has a right to shoot in defense of his property. Visalia Daily Times, March 29, 1909

Posted at 9:15 AM No comments:
Email ThisBlogThis!Share to TwitterShare to FacebookShare to Pinterest
Newer Posts Older Posts Home
Subscribe to: Posts (Atom)