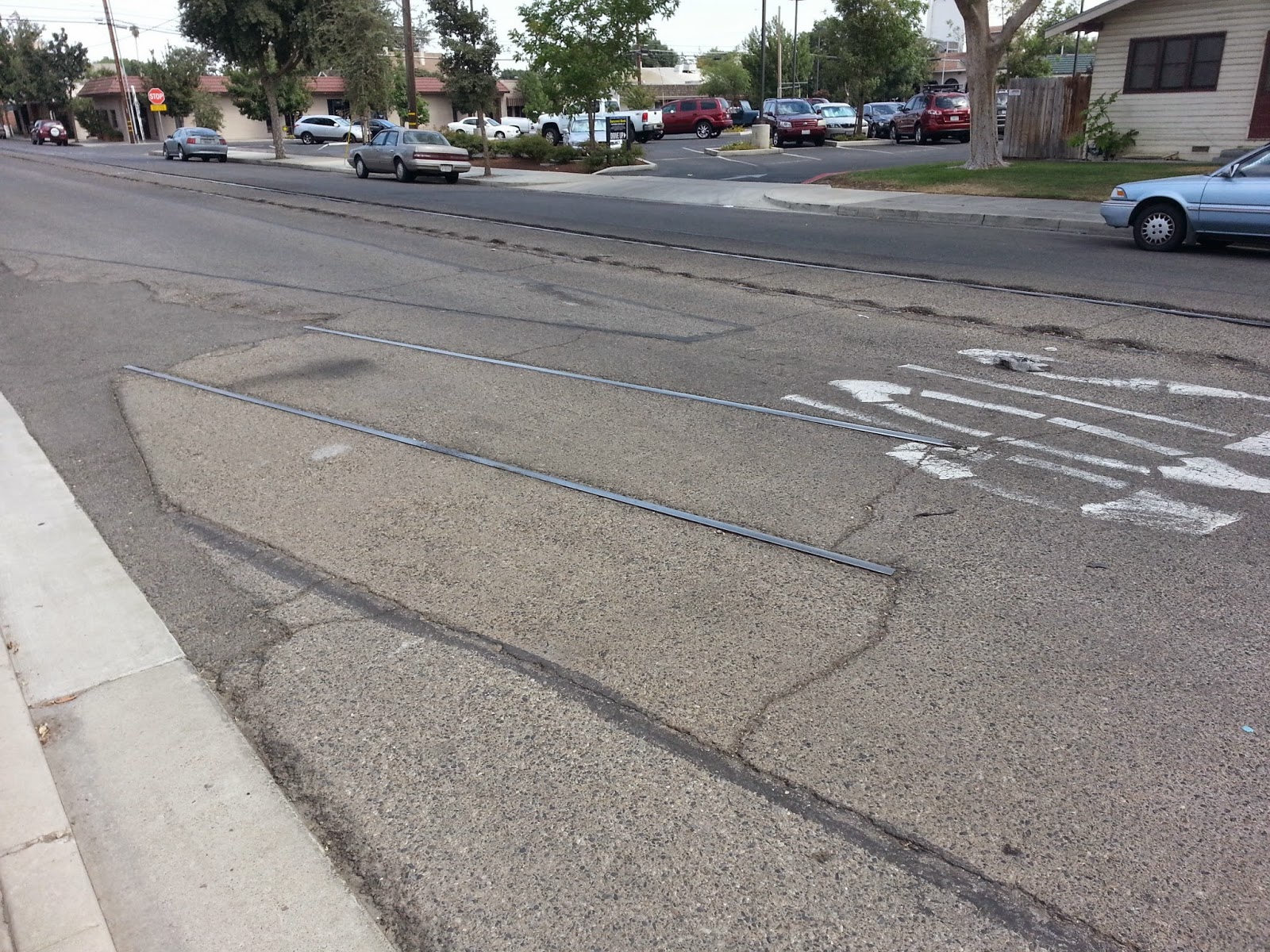 Well, we have a winner! Shirley Kirkpartrick was the first to identify the short segment of railroad tracks still embedded in the pavement located on Oak Street next to the Visalia Times-Delta building. Good observation, Shirley, and fast too.

Okay everyone are you ready for the next one?  If so, where is this plaque embedded in the sidewalk? Here are your clues:

The Mysterious Shack
The other day I was looking through some photographs working on a project  and noticed one image I hadn't looked at in quite a while. As I spent time studying the detail in this circa 1925 photo, I noticed something that I had never seen before. Next to the large brick structure ( almost looks like it is attached on the left) is a small building. It really blends in with its

huge neighbor. The little building says "The Shack - Root Beer and Light Lunches." Has anyone ever heard of The Shack? Of course it's gone now. The site is now part of the parking lot across the street from the downtown post office. This view is looking to the west side of Court St between Main and Acequia. Other signs on the large brick structure say W.O.W. (Woodmen of the World), Wing Bros, The Times (newspaper). Just thought I'd share this great old photo and I was wondering if anyone knows anything about The Shack?

The Former Home of the Times-Delta
Visalia is the oldest existing town in the valley between Los Angeles, nearly all the way to Stockton.  It had the first newspaper in the southern San Joaquin Valley (began in 1859.) Newspapers have played an important part in Visalia's history and the newspaper offices have been in a number of places around town. For over 47 years the Visalia Times-Delta has been at its current location at 330 No West Street. I strongly believe fewer and fewer people remember its previous location. The building shown here was the Visalia Times-Delta office for many years located at 214 W. Acequia—a building that is gone now. In April 1967, the Visalia Times-Delta moved from this location to their current home. 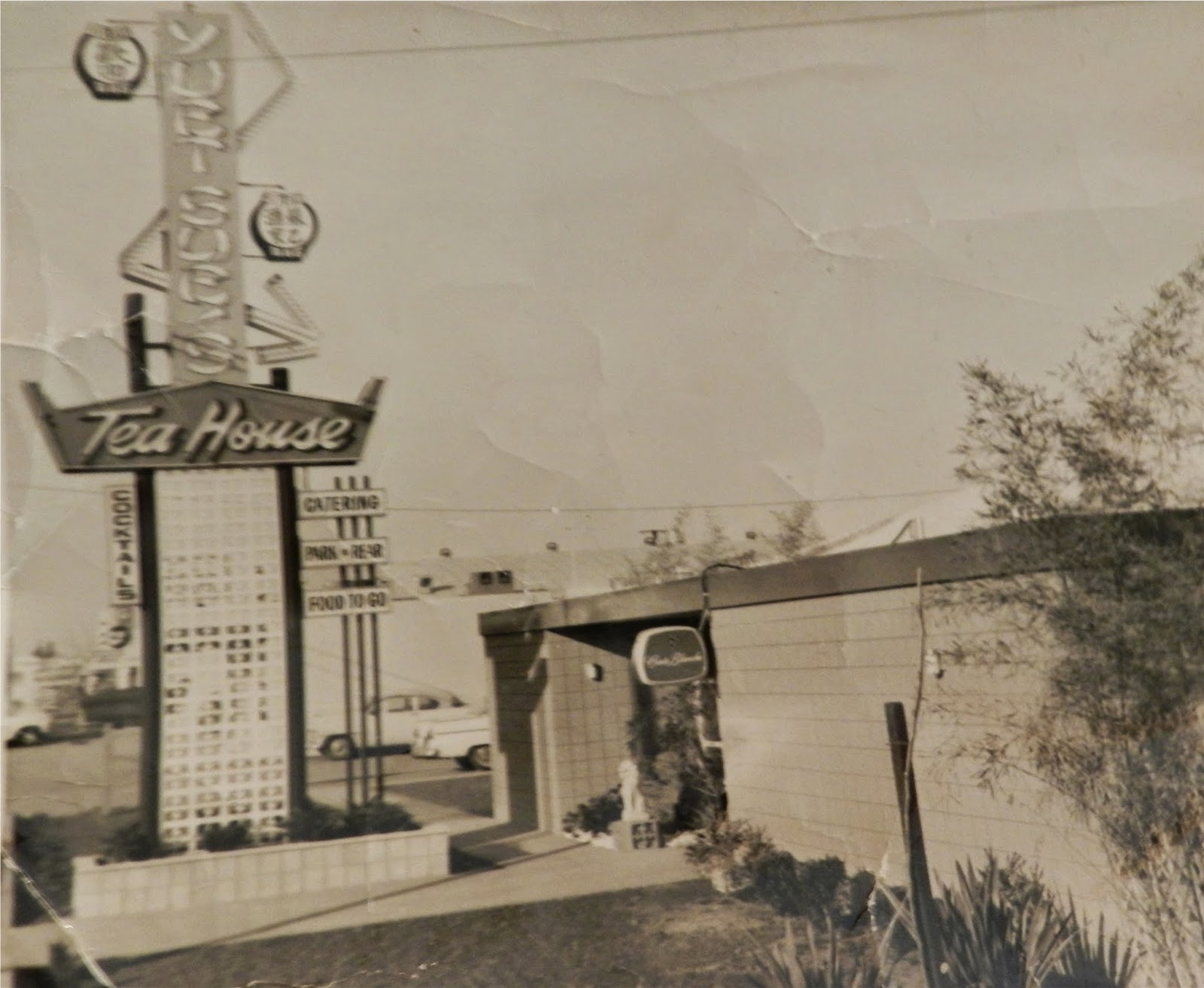 More On Yuet Sue's
As you may recall, Jaime Hitchcock recently asked about Yuet Sue's restaurant on So. Mooney Blvd. (where Denny's is now.) He asked specifically about what happened to the pair of decorative lions that welcomed you or some may say, scared you at the entrance to the restaurant. I had never seen a photo of the 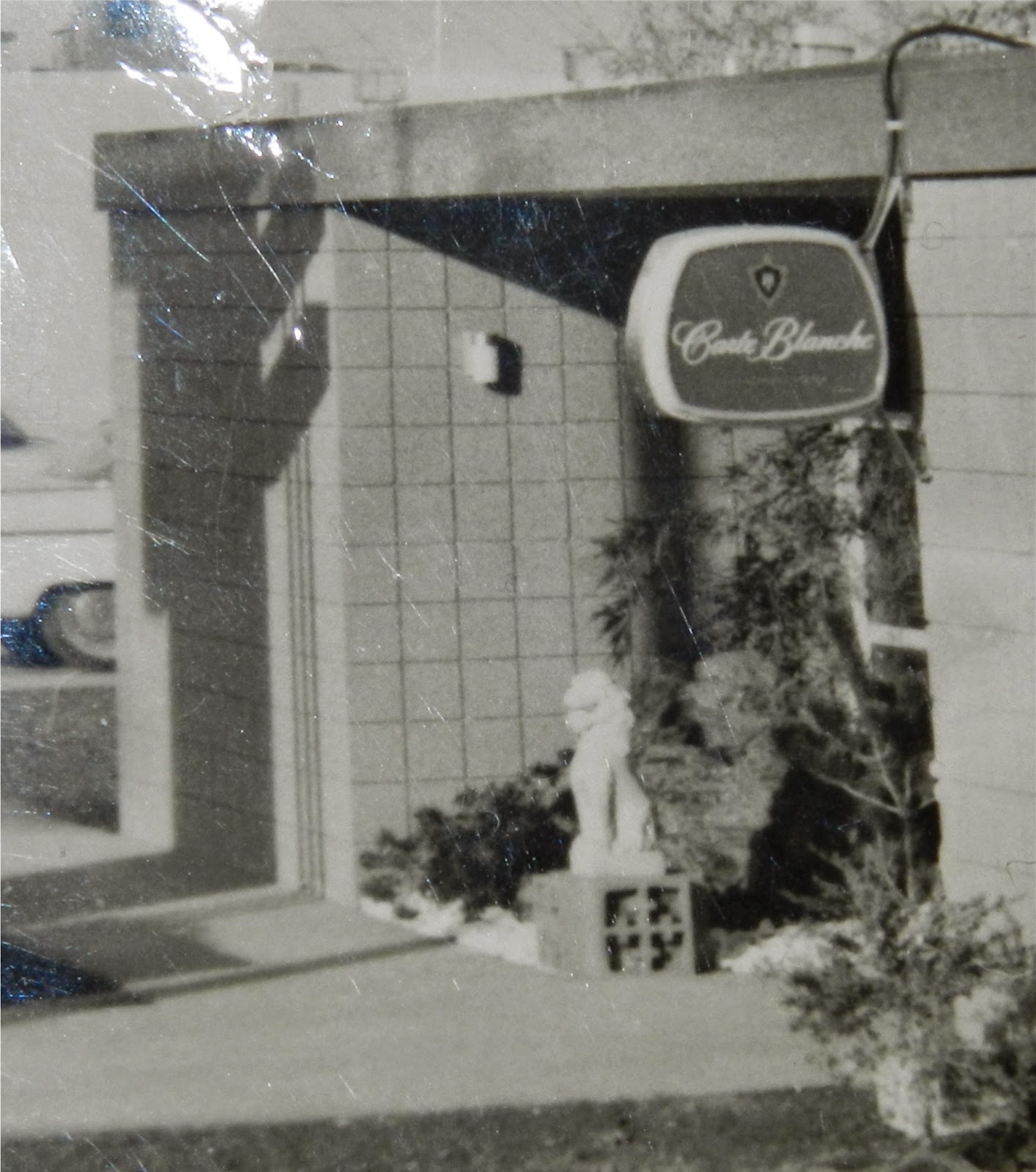 restaurant and I didn't remember the  lions, so I couldn't really picture what the pair looked like. But thanks to many of you,  I was able to contact Gerald Sue, the son of  Yuet and Elsie Sue.  He was able to help solve at least part of the mystery. Thanks to Gerald, we now have at least a partial photograph of this famous Visalia restaurant. In this picture you can even see one of the decorative lions. By the way, Gerald began working at the family restaurant as a young boy while he was attending 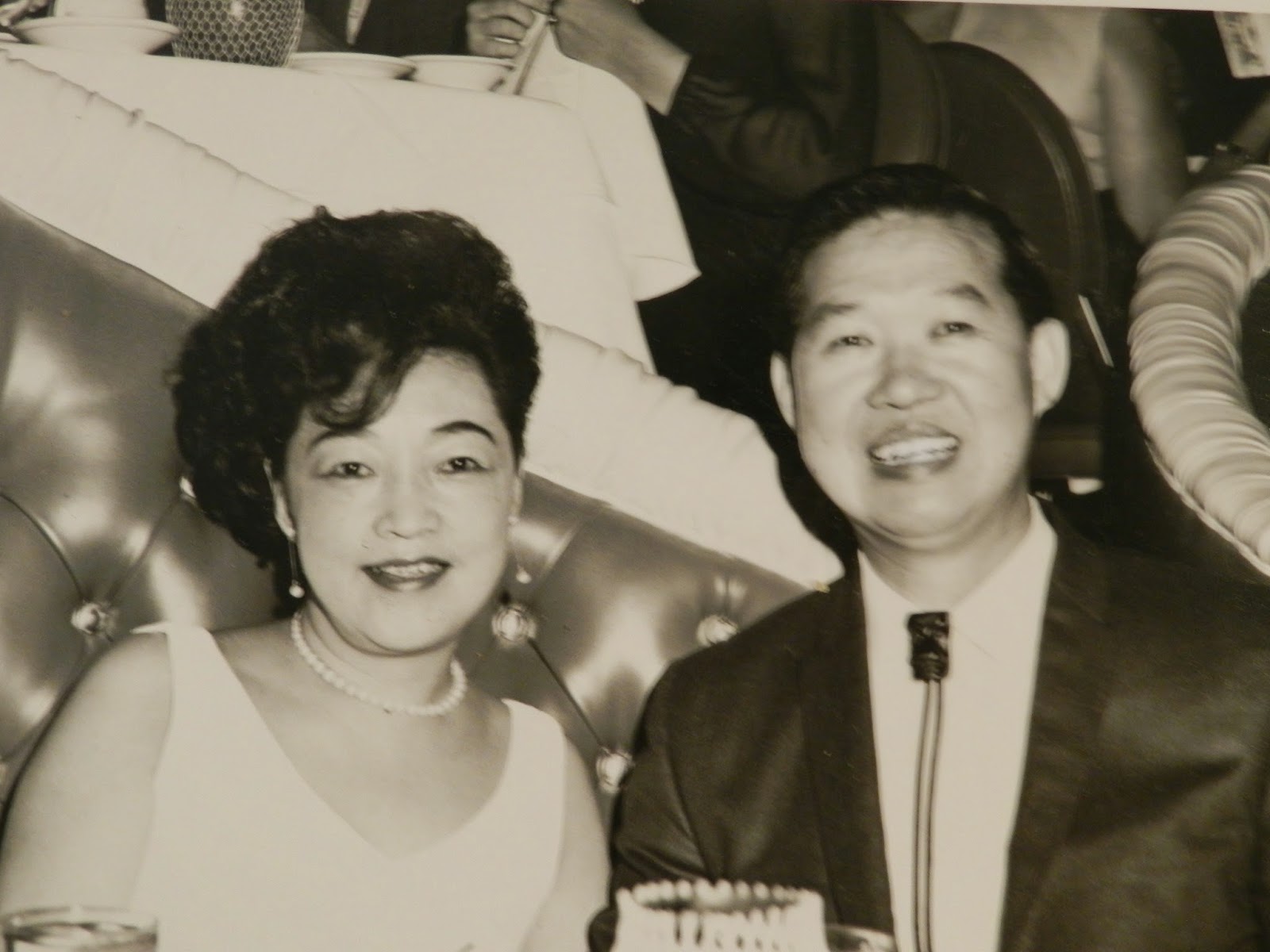 Divisadero School. Yuet Sue's building was constructed in 1960 and the general contractor was Red Miner. About 1975 the restaurant closed and the building went through several different restaurant names and owners. Gerald does not know what happened to the lions. Maybe this photo will help figure out where they ended up. The last photo is of Yuet and Elsie Sue. Thanks to all of you who helped to track down Gerald. Thanks also to Jaime for giving us a mystery to at least partially solve. But the lion safari is not over! 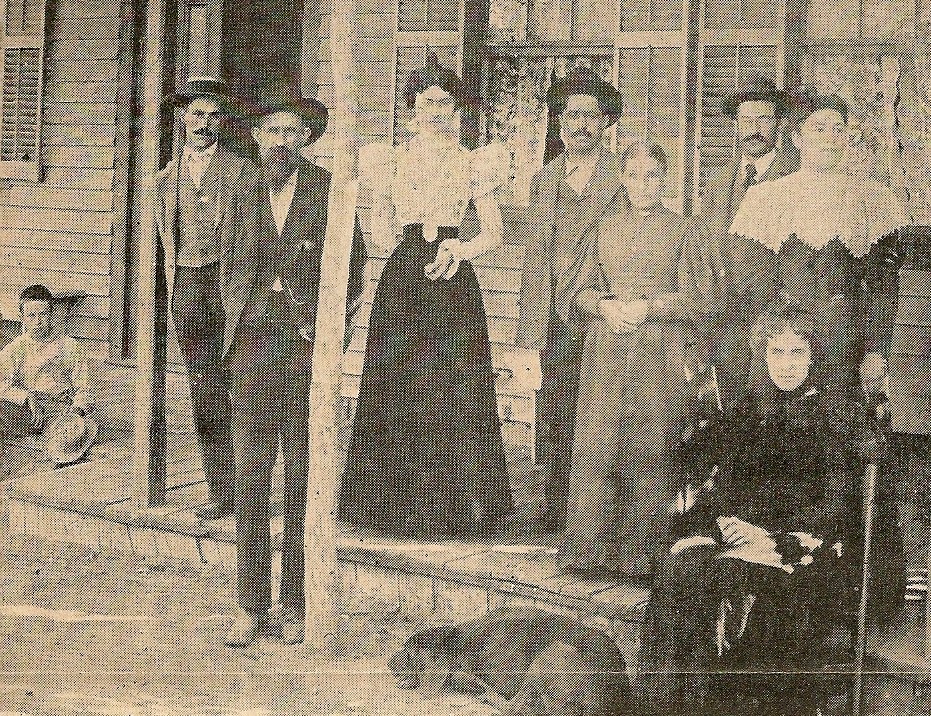 David Bice James—A Pretty Amazing Man
Some time back Peter Neeley asked about one-time Tulare County resident David Bice James. He had done some research on this Tulare County and Visalia pioneer, and was curious as to where he died and where he was buried. I did not have the information, but recently I received a contact from Monica, a descendent of James. We exchanged material on him and she was able to tell us that David Bice James died in Fallon, Nevada,

Churchill County, in 1907.  However, Monica did not have his obituary and I would love to get a copy. Anyone have access to the Churchill County Eagle Newspaper for about August 1907?  Peter, thanks for putting the word out. I believe you are responsible for the contact I received from Monica. By the way James was very talented and among many things, he was the inventor of a one-rail railroad and actually demonstrated it in Visalia in 1879 on Main Street. James is identified as the man standing 2nd from the left in this circa 1896 photograph.

Las Palmas—Probably Visalia's 2nd Oldest Family Restaurant
Recently, Joseph Vicenti invited me to join him on a visit to Las Palmas Restaurant on E. Main Street. The building that houses this popular restaurant is in a wonderful old historic structure dating back to 1904 or so. Gilbert and Alicia Cortez own the building and restaurant, but the restaurant was started by Gilbert's parents, Louie and Lena. They opened Las Palmas originally in about 1943 on the west side of Garden Street 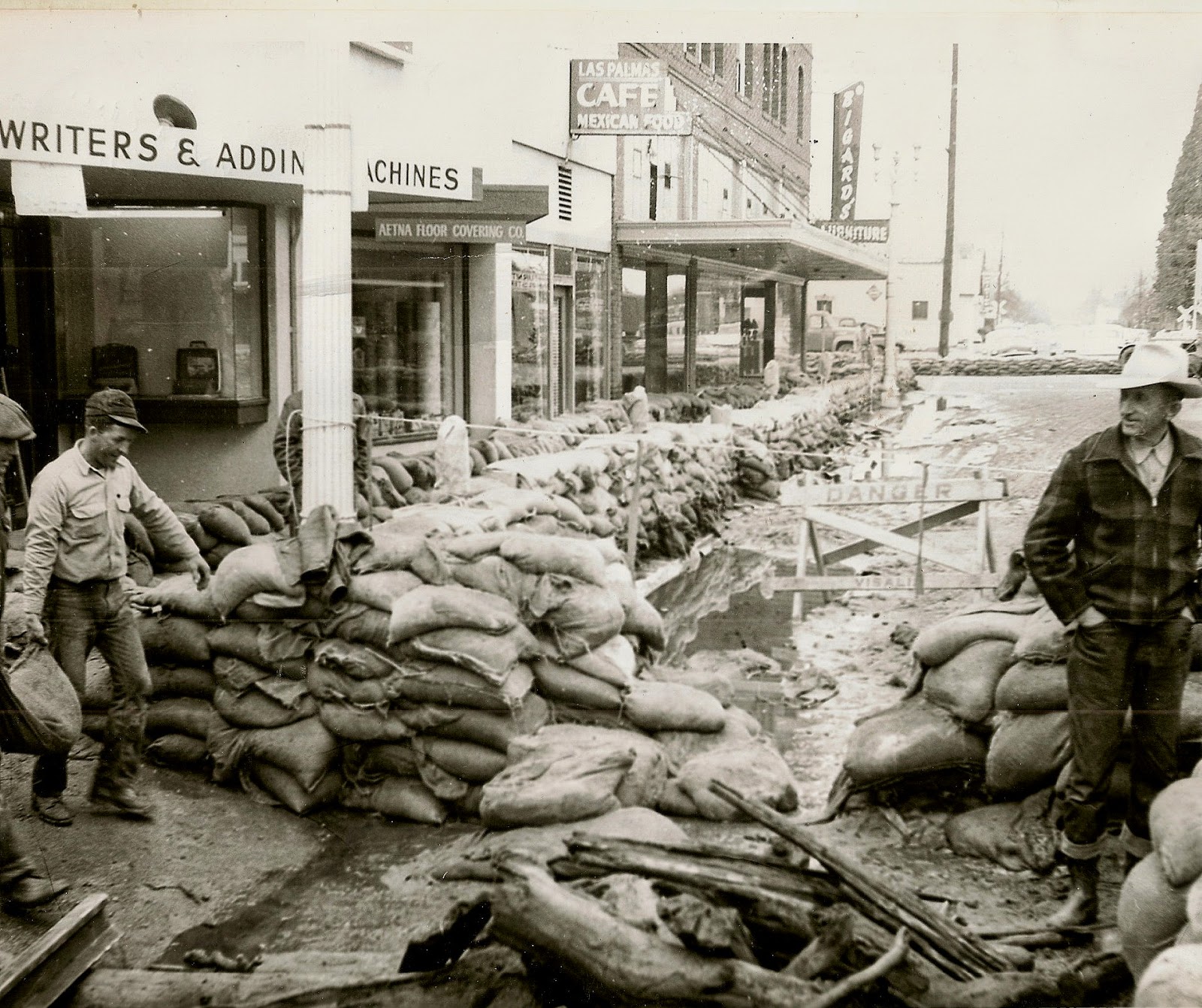 between Main and Center (now a parking lot.) In the fall of 1967, the Cortez family moved to their present location at 309 E. Main Street. Gilbert and Alicia are hands-on owners and are so proud of their restaurant, and they should be. They have a very loyal customer base. This couple prides themselves on "made from scratch" meals and they are also proud of their very old historic building.  This two-story building housed businesses prior to the Cortez family occupying it. It held the Pioneer Market, Money-Back Harry's, Edelstien's Mens Clothing, Soo's Meat Market, Fairway Meat Market and Lowrey Organ Company. All of those were on the ground floor at one time. The second story was once the St. Elmo House, Pioneer Apts, Cozy Rooms, and a boarding house. Thanks Joseph for arranging our visit to Las Palmas and thanks to Gilbert and Alicia for their gracious hospitality. They are shown here standing in the front of their building. The second photo shows the Garden Street location during the 1955-56 flood. Notice the sign above the entrance.

***Debbie Harland has a question. She was raised in Visalia and recently was "cruising the internet looking for reference to a corner market that was in Visalia when I was growing up called Allen Way Market. I remember it as being very small and plunked in the middle of a residential neighborhood over by Highland School. My friend there tells me it was near the Four Square Church. Any idea, or am I imagining things," she asks? Can anyone help Debbie?

***Barbara Tootle O'Dell is looking for information about her father's side (the Tootle side) of her family. Anyone with information on the Tootle family in Visalia, she would love to hear about it. By the way, her mom's mother, Celia Thompson owned Celia's Café near where the Red Carpet Car Wash is today. Anyone remember Celia's or members of the Tootle family?

***If you'd like to know more about the old "Good Templars Hall" on Court Street across from the old courthouse, pick up a copy of the September 2014 Lifestyle Magazine. There is an article with photos on the old time building starting on page 14. You can also read online by going to:   http://issuu.com/lifestylemagazine/docs/lifestyle_sept_web_8d6434373064cd

***Okay, I have more information on the old farm homestead at Caldwell and Linwood. The barn and tank house are still standing on the site. The site is being developed as the new home for a  Montessori school. For many years it was the ranch of Charles and Lucene Raibley. John Raibley believes they moved there in 1917. Go by and take a look. These relics of the past, namely the barns and tank houses, are disappearing very quickly in Tulare County. Thanks to all of you who led me to John Raibley for more information about this property.

Another much-needed permanent improvement which Visalia must make as soon as possible—if this city is to keep pace with other towns of the county and valley in attracting outsiders and tourists—is the main approaches to Visalia, those streets leading into the city from the east and north in particular. Approaches such as that on West Main Street for the principal roads into Visalia would be a wonderful betterment to this city; and it is hoped that the city board will find itself in a position to make these notable improvements soon. Visalia Daily Times, May 10, 1919
Posted at 7:34 PM 1 comment:
Email ThisBlogThis!Share to TwitterShare to FacebookShare to Pinterest
Newer Posts Older Posts Home
Subscribe to: Posts (Atom)