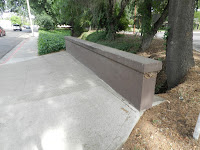 Congratulations to Doug Silveria for being the first to identify the last mystery spot as the concrete overcrossing of Mill Creek on Main Street near Mayor's Park. It is a dominant feature there, but one we take for granted as we pass over it all the time. Nice work, Doug!

Now for the next one. It think it’s going to be easy. Here are your clues:
1) This building was finished in 1918.
2) People lived here on a temporary basis
3) Oftentimes those that occupied this building were noisy.
4) There was a strict code of conduct if you lived here.
Where is this building?

Ralph and Helen Drath—Educators Through & Through
The recent HH discussion of teachers in Visalia has led me to conclude that Visalian's really do love their teachers and educators. And in my opinion there are no better examples of respected educators than Ralph and Helen Drath. Ralph was born in Kansas in 1911 and moved to Visalia in the 1930s. He taught school here, then became a principal at Webster, Highland and Houston schools. He was also 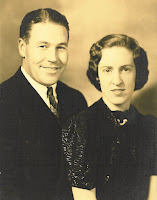 one of the founders of SCICON. In 1932 he married Helen and the two built their home on Highland Ave. They raised 2 boys, Richard and James there. Later in life Helen worked as a library assistant at COS and served in that capacity for about 15 years. Both passed away in Visalia, Ralph in 1962 and Helen  in 2005 and each  had touched so many lives and had earned so much community respect.  The photo of Ralph was taken in 1952 and the photo of them as a couple was taken on their 5th anniversary in 1937. 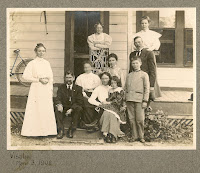 Help, Help, I Need Your Help!
I recently came across this photograph marked "Visalia, May 3, 1908." It has no other markings. I do not recognize the house at all, but the man sitting on the steps is so familiar to me, but I can't recall his name. Does anyone recognize him or anyone else in this group? Come on, please! 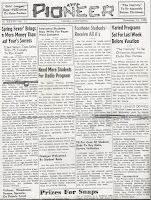 76-Year Old Pioneer Newspaper Surfaces
Doug Silveria recently found an older "The Pioneer" newspaper for December 15, 1939. The Pioneer was the official Visalia High School newspaper and was written by journalism students. It reported on serious school news like, "Fourteen students receive all A's," but included lighthearted material as well like, "Gladys Trembly and Neal Ensign get the title of the cutest couple on the campus." Fun stuff to read. Thanks Doug for sharing this interesting old high school newspaper. 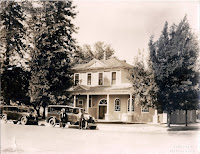 Wheaton Gray’s Home Becomes Mortuary
The carpenter's union building located on the southwest corner of Church and School streets was once home to Superior Court Judge Wheaton Gray. The residence was constructed about 1875, and over the years it went through several remodels and additions. At one time it was home to the A. E. Brooks Mortuary. Here is the building as a mortuary in 1929. Architect Michael Kreps is wondering if anyone has a photograph of this building when it was the judge's residence, before all the remodels and additions. Can anyone help?

Monty Sands Does it Again
Well, Monty Sands has written another. Yep it is another history book and this one is called In More Innocent Times. I have not read it yet, but it looks like another good one to me. In it he describes life in the San Joaquin Valley in the 1940s, '50s, and '60s. It has occasional mentions of Visalia and includes a short chapter on Spanish Town and saddle companies. Just glancing through it, I know you will recognize topics familiar to you. In More Innocent Times is available at Amazon and at Bargain Books  and Linda's Books in Visalia.

Photograph of the W. B. Wallace Home
Recently I was talking to Marilynn Mitchell at Josten's and she mentioned an old photograph that had been in her father's (Hank Speer, the well-respected identification officer with the Tulare County Sheriff's Dept.) collection. His picture is shown here and is of an old house on Acequia near Willis. Marilynn believes the house once belonged to a superior court judge. I did some further checking and I now believe that this house belonged to Judge W. B. Wallace. It was torn down years ago, but there is an interesting story connected to it. The judge complained vigorously to Herbert Askin who owned a tin smithing business nearby on Main Street. He said the business was too noisy and disturbed his peace. Askin moved his tin shop to a new location on E. Main Street. Thanks for the photo, Marilynn

Speaking of School Newspapers
I recently came across what I think to be a pretty rare item. The Visalia Junior College opened for the first time on the Visalia High School campus in 1926. The junior college which became COS stayed on the high school campus until 1940 when it relocated to its new location on Mooney Blvd, where it is now. This Volume 1 Number 1 VJC campus  newspaper was issued on September 29, 1933 and was 4 pages single sided and 8 ½" x 13" in size. It says it was "mimeographed" no less. Now there's a term we rarely hear anymore. 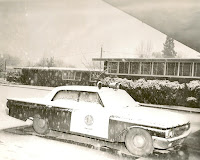 Recently Bob Hargrove, Troy Tuggle and I had coffee and Bob shared these photographs. They are undated, but I believe they were taken during the snowfall in Visalia in January 1962. The two pictures on top show the Visalia City Hall complex on Johnson Street. The bottom photo shows a parked Visalia police car covered in snow also at city hall. The snow sure looks refreshing in these days of triple digits. Thanks, Bob, for sharing.

***Troy Tuggle reminds us all that just in case you didn't know, Black Bart, the famous California stage robber, was last seen in Visalia before he disappeared. Finding his burial location would be a real find. It's a mystery that should be solved.

***For those interested in Babe Ruth and Lou Gehrig, these two famous ball players appeared in Visalia—well, sort of. You can read more about it in the May 2015 issue of Lifestyle Magazine starting on page 13. Or you can read the article online at http://issuu.com/lifestylemagazine/docs/lifestyle_may15_web

***The teachers in Visalia that were listed in the school directory in the last HH created quite a lot of interest. So many of you recognized names and remembered stories about the beloved teachers. Thanks to all of you who shared them.

***John Bergman was able to confirm that Betty Treaster's memory was correct. The Sugar Beet Factory was at K Road and Santa Fe. Thanks John and Betty for that confirmation.

Good Whiskey – Persons desiring pure whiskey can find it at F. W. Blake's. We were the recipient of some of it, the other day and have been using it under the doctor's orders of course, and is the best we have met with in Visalia.  Visalia Tulare Times, October 2, 1869
Posted at 9:04 PM No comments:
Email ThisBlogThis!Share to TwitterShare to FacebookShare to Pinterest
Newer Posts Older Posts Home
Subscribe to: Posts (Atom)