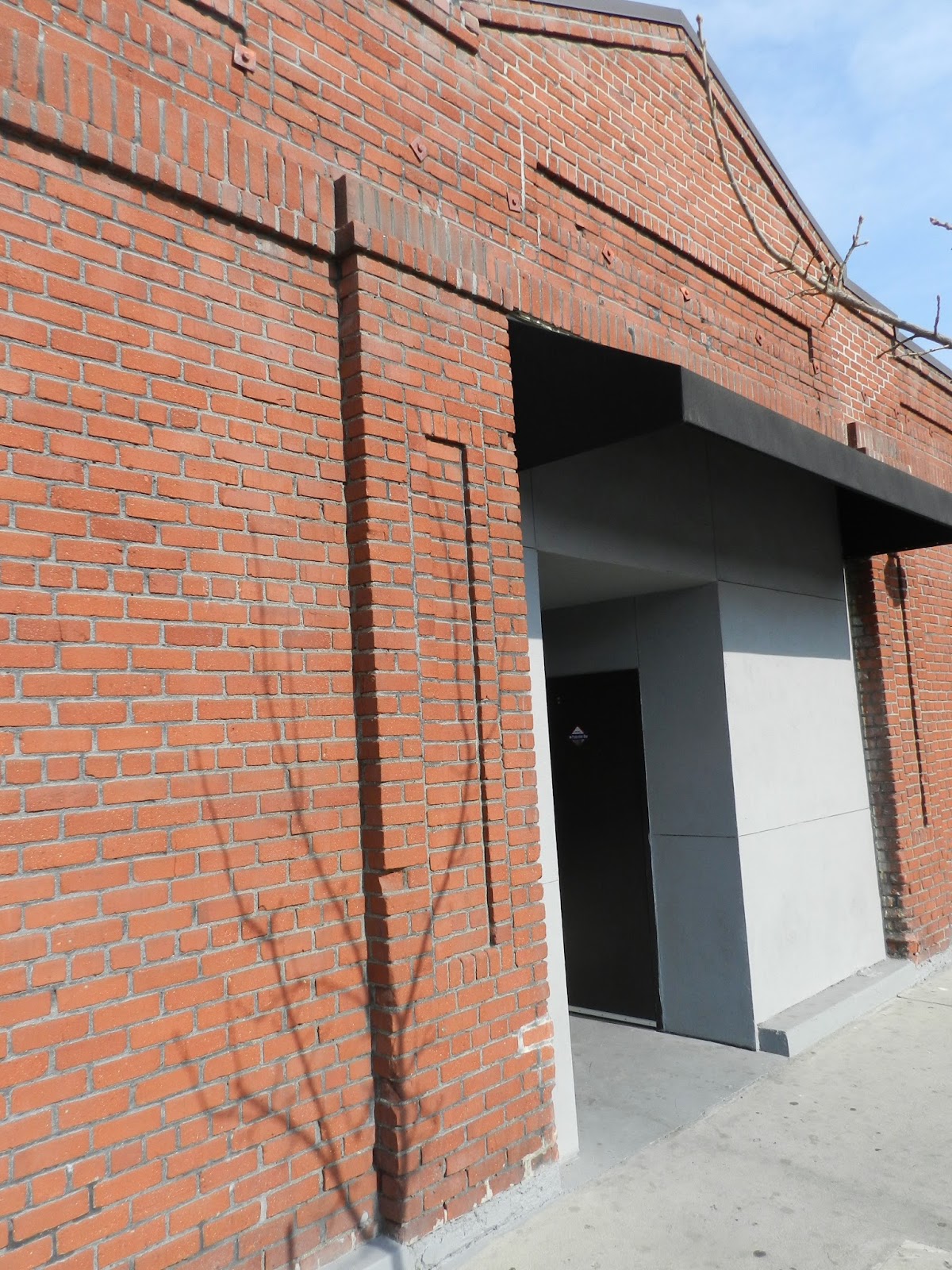 Pete Cowper is the winner! He was the first to correctly identify the last mystery spot as the 210 Café building or the Studebaker building as it was called in its day located at Locust and Center streets. Nice work, Pete!

Okay, here are the clues for the next one:
1) This building was built in 1921.
2) It started as a health related facility and it continues so today
3) The local architect for this Main Street structure was Harry Michaels and the contractor was Noble & Toothacre.
4) Mrs. Medda V. Keener lived here.
Where is this building? Good luck. 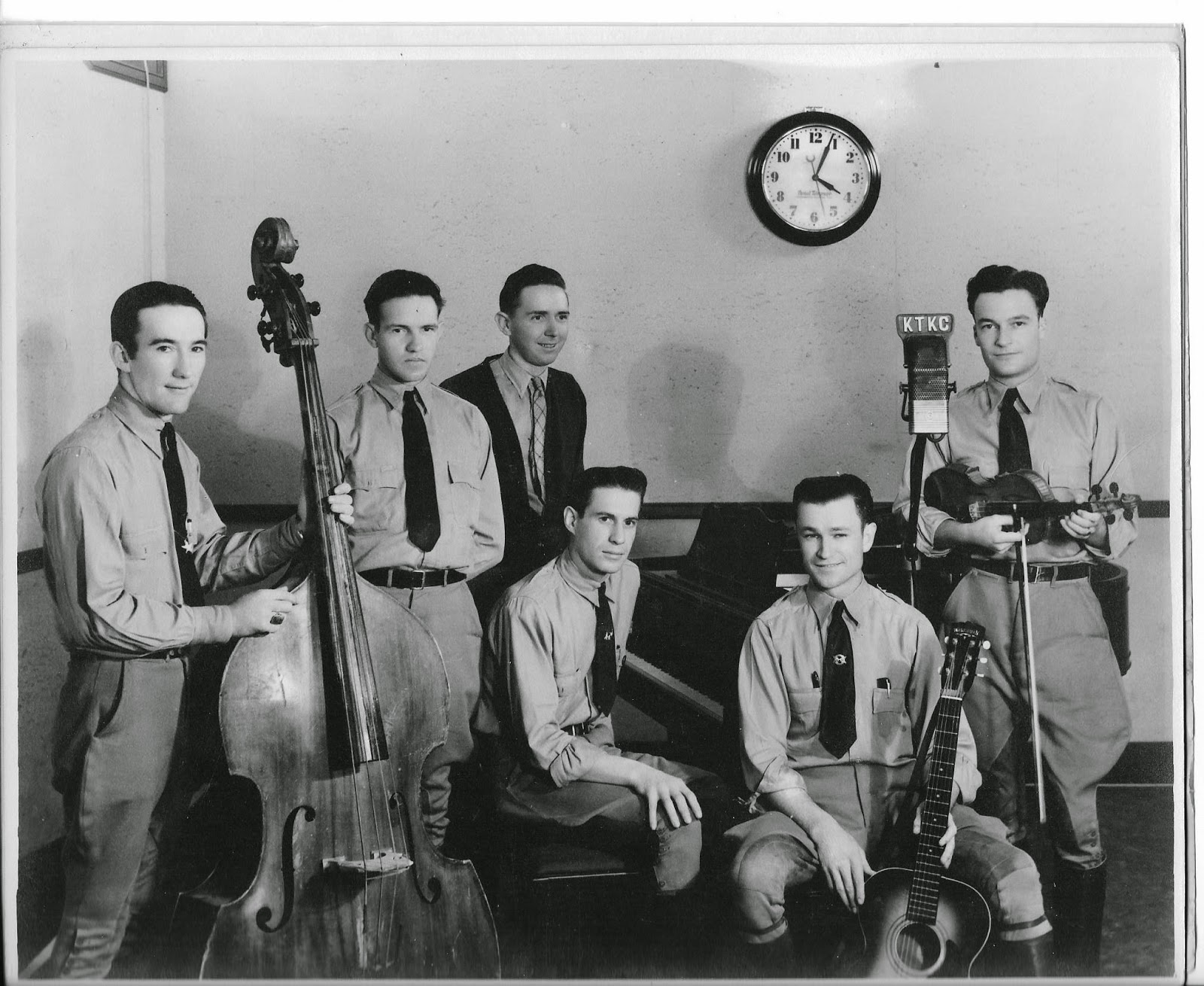 Sandy Warren—He Made Lots of Sweet Music
Recently I met with Lee Otto Warren to talk about his father who is also Lee Otto Warren. Senior was born in 1910 and was probably known more by his nickname, Sandy Warren. Sandy was quite a musician and he lived on Center Street near Taylor's Hot Dog Stand. He attended Visalia High School but dropped out in his senior year to join Augie Schultz and the Hayseed Band. He played multiple instruments over the years, was artistic and at various times, worked as a ranch cowboy. During his years as a musician he played with various local bands including 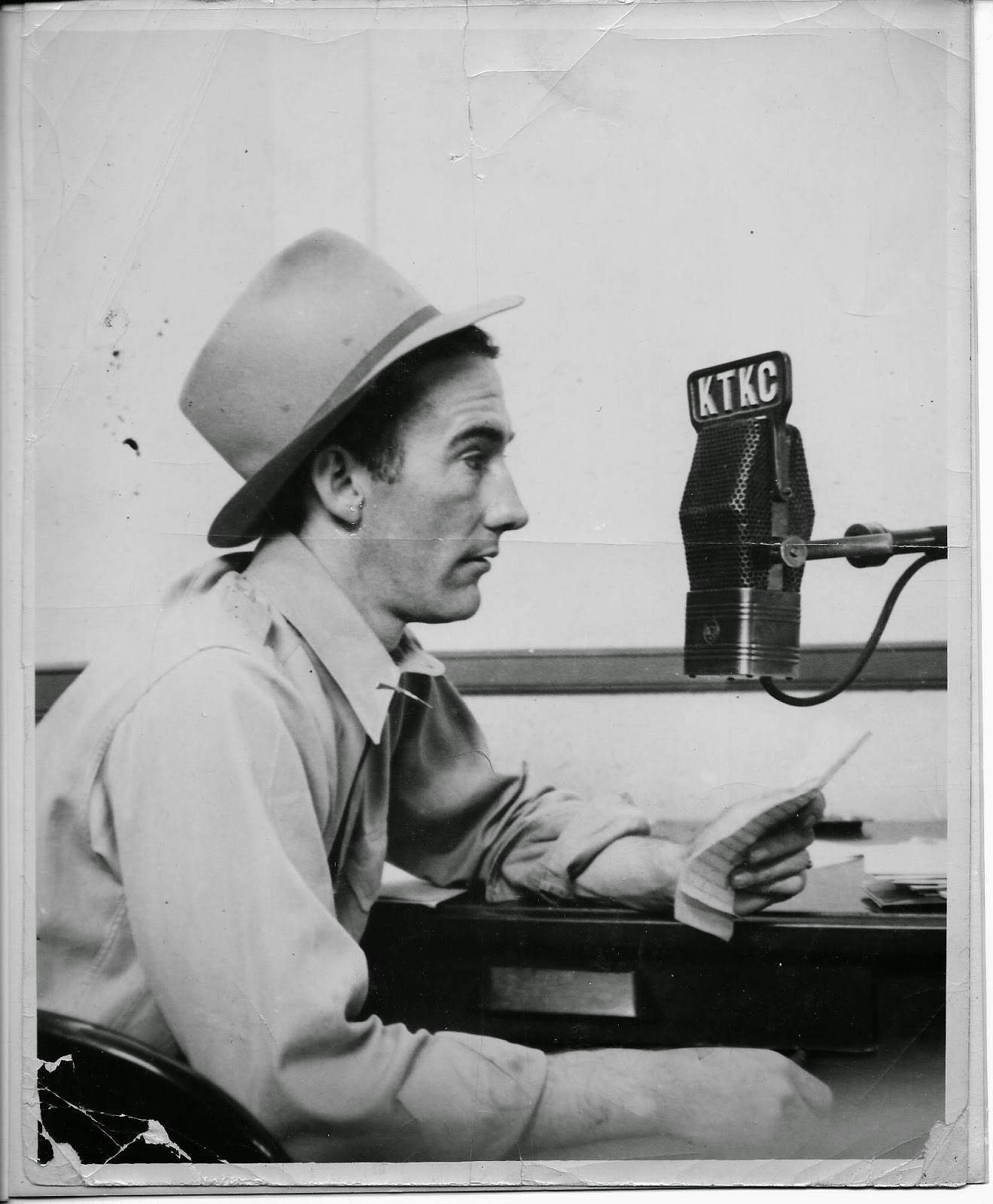 the Sleepy Heads, Smokey Mountain Rangers, Hayseeds and Rolling Stones (no, not those Rolling Stones). Sandy performed frequently at the KTKC radio station in Visalia. By the way, Sandy entered the military service in 1939 and was discharged in 1943 with a full disability. He died in 1966 and his family has kept his musical instruments. In this group photo, Sandy is on the far left and the band is called the Smokey Mountain Rangers. The other photo is Sandy working the microphone solo. Does anyone recognize any of the other band members? Thanks Lee for sharing some of the story of your father.

The Waste of War – A Civil War Veteran Visalia Doctor
Native Visalia Carole Mathewson (now of Payson, Arizona) has recently gone to press with a Civil War novel based upon the lives of her great-grandparents who served in the Civil War. Dr. Harley P. Mathewson, a graduate of Dartmouth Medical School, served as a Union surgeon from the beginning of the war until several months after the war had ended. His wife, Mary Sanborn Mathewson, a nurse, was beside him throughout the war. In order to write story lines, Carole has researched all the 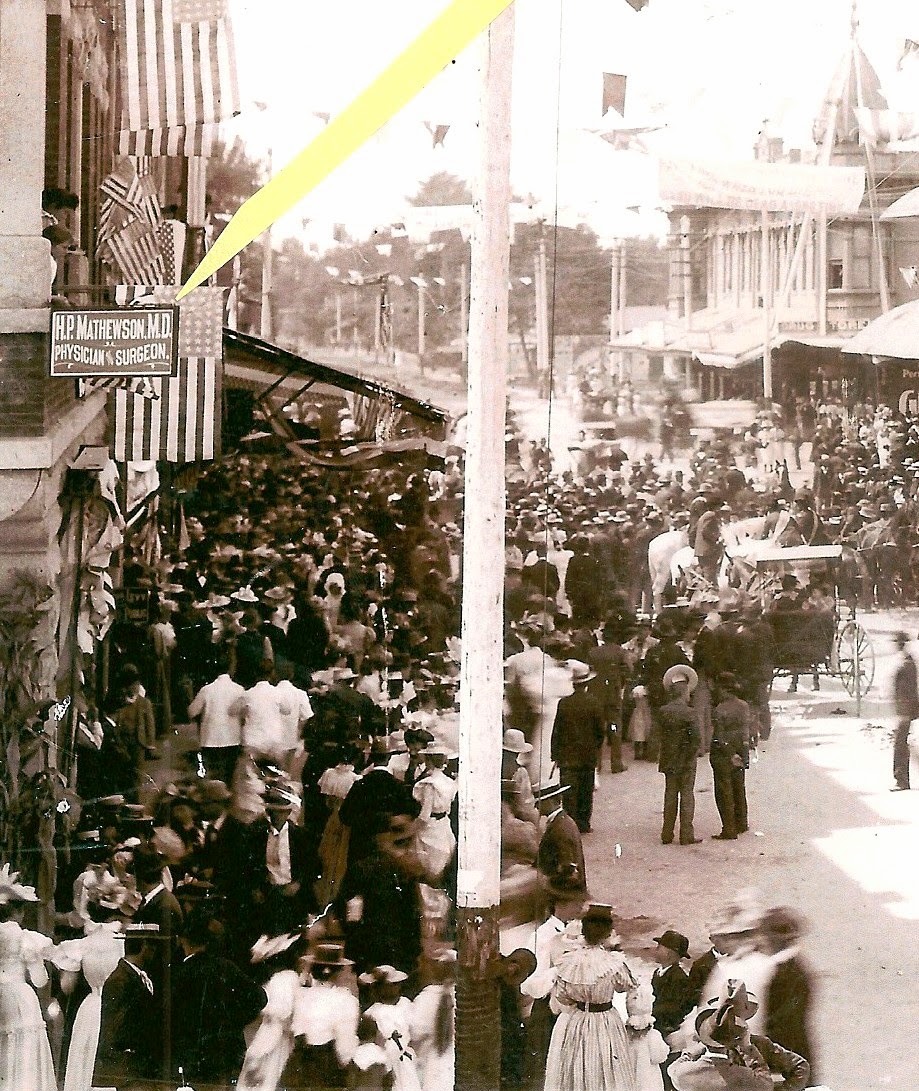 battles, campaigns and hospital in which the duo served. Dr. Mathewson and his wife joined his brother Arthur in Visalia in about 1893. He practiced medicine in Visalia from 1893 until his death in 1901. He and his wife were interred in Arlington National Cemetery. The writer's background includes many years as a secretary (executive and legal) and a number of years as a newspaper reporter/copy editor. The Waste of War by Carole Emma Mathewson is available online through Amazon.com and in printed form and as an e-book. In printed form the book sells for $17.99. The doctor's shingle is shown here (circa 1897) on the Main Street side of the Elias Jacob Building at Main and Church streets where he had his office. 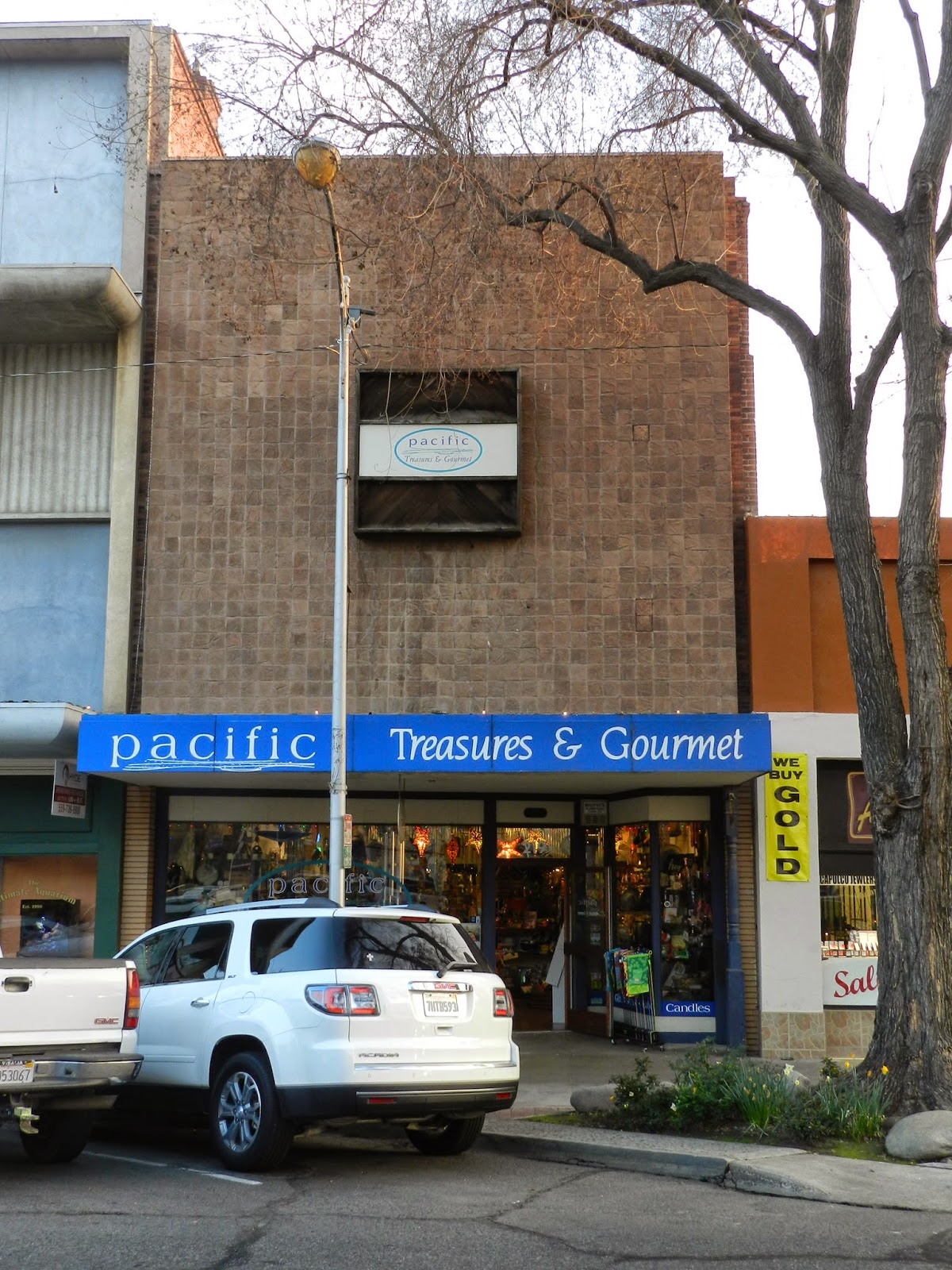 2nd Floor Archaeology Reveals Hidden Sign
Some time back, Michelle Wiebe, owner of Pacific Treasures in downtown Visalia, alerted me to an interesting discovery she made on the second floor of her building at 219 W Main Street.  The building appears to have been built before 1912, however, I cannot find its construction date.  Over the years the front of the building has been modified. At one time the second story had windows facing Main Street, but they are now 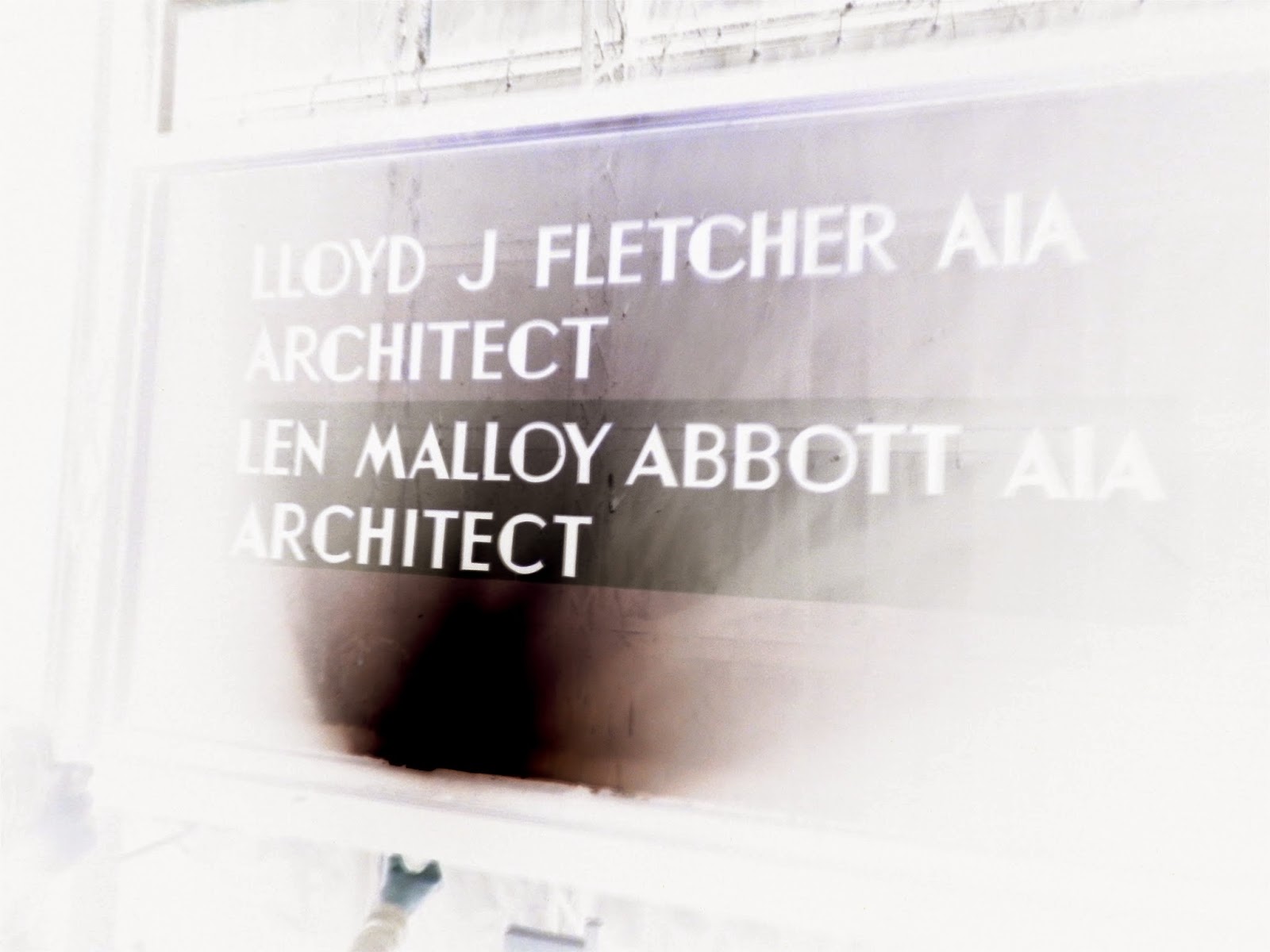 covered with a façade. Since at least the 1940s, it has been known as the Cross Building where Robert F. Cross had has real estate and insurance office. By the mid 1950s the upstairs rooms were called the Cross Apartments. At that time Lloyd F. Fletcher, a local architect, had his office on the second floor. And his name could be seen painted on the window advertising his services. While Michelle was looking in the vacant upstairs, she discovered the window painted sign showing his name, now covered with the facade. This is what she found with the partial name of Fletcher. It's not visible today from the outside. Thanks, Michelle, for your attic archaeology.

John Bergman Discovers A Rare Mooney Grove Postcard
John Bergman recently found this neat old postcard. The front shows a grove of oak trees and the caption says, "An oak grove owned by the county, purchased for a park site, near Visalia, Cal." The back says: Published by Newman Postcard Co., Los Angeles and it says Made in Germany. The unused postcard gives no direct clue as to where  this grove was located, but given

the fact that the land that is Mooney Grove Park was purchased by the county in 1909, it really has to be Mooney Grove.  The other park possibility is Cutler Park, however the land that it is located on, was donated by the Cutler family to become a park. The county did not purchase the land. Since the caption on the postcard says "purchased," it leads me to believe the postcard is Mooney Grove Park.  Thanks John for sharing this postcard – one I had never seen before.

Wunder Bar—A Wunderful Discovery
As everyone knows, Link's clothing store in the old Sweet building downtown, has closed its doors and that part of the Sweet building is going through a remodel. In the course of the construction, Tom Link 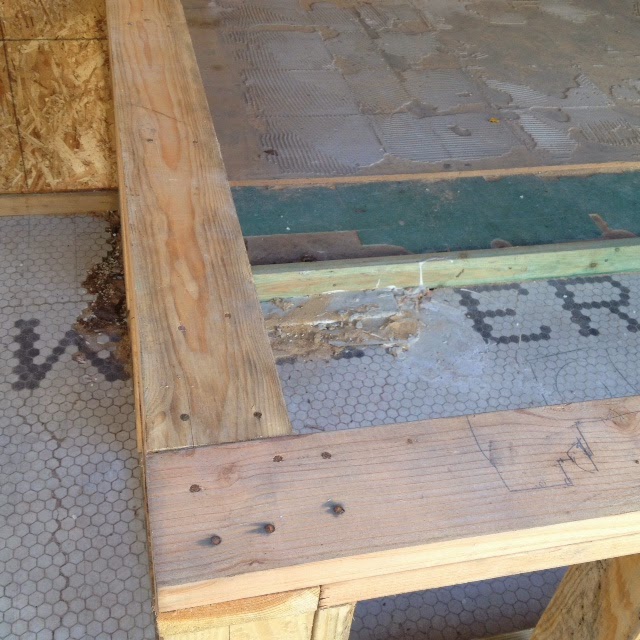 noticed that the workers had unearthed a piece of early Visalia history. The Link's store was pretty much on the exact location of the Wunder Bar—a Visalia "watering hole" for many years. As you can see, the entrance to the saloon/restaurant had Wunder Bar printed in tile on the floor at the entrance. If only these tiles could talk. Thanks Tom for your good eye for history.

Verfurth—A New One for Me
Recently I was looking in the 1926 Visalia Directory classified section when I spotted this picture. The name Verfurth is not a local name that I am familiar with, so when I saw it, it caught my attention. The building at one time housed the local Dodge 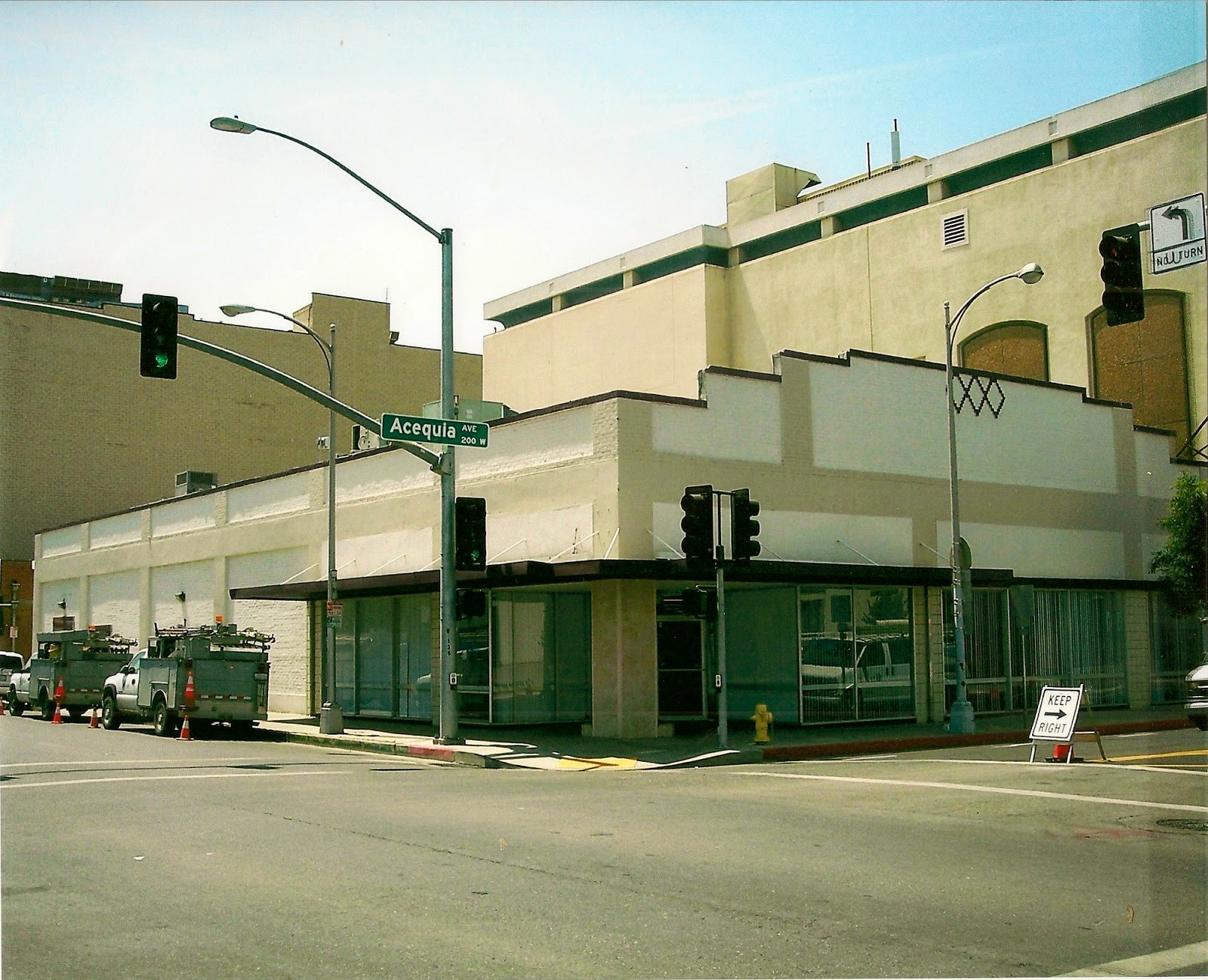 dealership. The structure still stands today, I believe as part of Kaweah Delta on the southwest corner of Acequia and Locust streets. The unique 3-diamond pattern at the top of the building clearly identifies it as the same old timer that is there today. The more contemporary photo of the building included here is one I took in 2009. Does anyone recognize the name Verfurth in Visalia history?

***I was recently contacted and asked about a pioneer who the inquirer says was born in Visalia in 1855. His name was Jerome Frank Reno. Anyone know anything about him?

***For those interested in history of the old and long- gone Visalia House, you can go to the February 2015 Lifestyle Magazine page 12 and read about it. It can also be found on line at http://issuu.com/lifestylemagazine/docs/lifestyle_feb15_web

***In the last HH I featured a photograph of an old school allegedly near Visalia. A few of you suggested it might be Venice Hill School before the bell tower was added. I haven't been able to confirm this, but if anyone can help in doing that, I'd appreciate it.

***Dennis Whistler, an architect here in Visalia, is looking for an older photograph of the R. A. Mahoney brick building, later the Mooney and O'Dell Ford dealership located at Center and Garden streets. Anyone have a photograph to help Dennis?

Mrs. King, the woman hobo who was arrested in Goshen, was arraigned in Justice Buckman's court yesterday morning and pleaded guilty. She was given a floating sentence. She left on the evening train for Goshen. Visalia Daily Morning Delta, November 18, 1893
Posted at 6:25 PM No comments:
Email ThisBlogThis!Share to TwitterShare to FacebookShare to Pinterest
Newer Posts Older Posts Home
Subscribe to: Posts (Atom)