Congratulations go out to Erin Hayden who was the first to get the fire escape correctly identified as the latest Mystery Spot. The fire escape is in the alley between Midtown Sports and Links. Nice work, Erin.

Where is this building? Good luck. 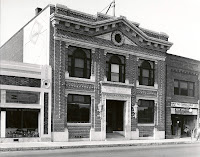 As you may know, the Mt. Whitney Power Co. was incorporated in 1899 and really electrified much of Tulare County. The company office was located in a couple of locations in Visalia, and in 1912 it was on Main Street where they built the building that now houses Quality Jewelers (213 W Main Street.) This power and electric company built dams, created flumes, and generated precious power which modernized Tulare County. Later the company became Southern California Edison. Recently, Bill Tweed, a well-known writer and naturalist, shared this amazing on-line, historical collection of Mt. Whitney Power & Electric Company photographs. They are housed at the Huntington Library, but you can look at them on-line at http://hdl.huntington.org/cdm/search/collection/p16003coll2/searchterm/Mount%20Whitney%20Power%20and%20Electric%20(MWP&E)/field/physia/mode/exact/conn/and/order/call/page/1 . Thanks Bill for sharing your discovery.

Tie Rods and Wall Washers
I know the title of this story sounds like a heavy metal band, but it is not. For many years I have been interested in old buildings. I guess it’s the history they represent but the architectural features are also of interest to me. One feature I have been particularly interested in is a small almost trivial aspect of these buildings. It is the metal plates/caps found generally toward the top of brick buildings. Many old brick buildings have them and if you look inside the building you can sometimes see the metal rods that run through the building and attach to these plates or caps. The rods and caps are building supports and their purpose is to keep the building from “bowing in or out.” Basically, these rods and caps help keep the building “plumb.” I have talked with many people about these over the years trying to find out what they are called but up t this point, no one has been able to tell me. Recently, I communicated with Philip Vallejo, an architectural historian with the state of California and he suggested they could be called “tie rods and wall washers.” I now have a name for these features and I thank Philip for that. The photos that you see are all “wall washers” that can be found in some of Visalia’s old brick buildings. Let me know if you can find any more. In places outside of Visalia, I have seen more decorative ones in the shape of stars, etc. 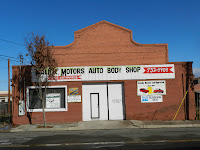 Kim Gunter reminded me recently of the old Malick Motors building at 510 E. Acequia. It has an interesting front as you can see and the brick building(s) run all the way to Main Street. According to my information, the building is currently vacant and went up for sale in 2009. According to the owners, the building dates back to at least 1914. They also claim that Bill Malick opened there in 1954. It looks like there was E. Main Street frontage too at one time, and maybe there were two buildings joined to make one. Notice in the second photo there appears to be 2 different brick colors and styles. Kim also pointed out that she occasionally sees Malick Motors license plate frames on cars. Now that you mention it, I think I have too.
1873 Assessor’s Book – A Treasure Trove 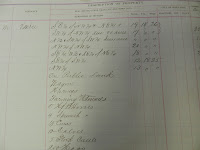 Dustin Smith, a Visalia history buff and HH follower, shared an old Tulare County ledger book with me that he has had for a number of years. It is huge and very heavy and dates back to 1873-74. It came out of the Tulare Co. Assessor’s office. It is filled with interesting information about real estate and personal property dating back over 135 years. It reads like a Who’s Who of early Tulare County. Dustin has offered to do lookups for anyone interested in research material. It is organized alphabetically by name. Here is a sample entry showing what information can be found. Let me know if you have a request. Thanks, Dustin, for your willingness to help.

I have been in touch with Duane and Doug Copley, former Visalians, about the old G & I market in Visalia. It was named for the Goldstein and Iseman families. The Iseman family had been in the grocery business since about 1896 in Visalia and for many decades G & I was a household name. Copley’s bakery also had an outlet in the market. The Copley’s and Iseman’s were good friends and Duane recalls a road trip that John and Emma Copley and Jack and Lois Iseman took “together to study supermarkets.” Bob Iseman, the son of Jack and Lois, added that his parents and the Iseman’s actually attended a grocer’s convention in Florida together. Shortly after their return to Visalia, the new G & I Food Center was built on the southeast corner of Main and Willis. The market opened for business on Monday, August 22, 1950, and the following month Jack Iseman penned a grateful letter to the community which appeared in the Visalia Times Delta. The Food Center building still stands. It has been remodeled and now houses several businesses and offices. Thanks, Duane, Doug and Bob for sharing.

Miles Shuper—A Well-known Journalist
As many of you know, Miles Shuper reported on Visalia and Tulare County news for a long time. He actually began his career as a journalist in 1967 working for the Visalia Times Delta. Later he reported for the Valley Voice and is well-known for his regular column called “Miles Around.” I first got to know him when he was a police reporter for the Delta in the early 1970s. Miles has left the newspaper business and the area and is now living on his family property near historic Knight’s Ferry in Stanislaus County. Recently I paid him a visit at his family homestead. He gave me a nice tour of the area and we had an enjoyable day. This story is not really Visalia history, but Miles Shuper is part of Visalia history and I thought I’d give you an update on a man whose byline will forever be referred to by future Visalia and Tulare County historians. Note the street sign in this photograph, and yes, I’m sure you agree that it is nice to know Miles is still “around.” 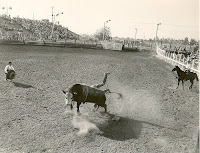 Cattle Country Means Rodeo
Visalia and the surrounding area has been rodeo country for many years. It comes with being cattle country. As an example, the Visalia Delta newspaper reported in August 1859, “This is the season for the stock raisers to collect their cattle and separate them for the purpose of branding and marking young stock. Every few days, there is a rodeo somewhere on the plains for that purpose.” Even though these early rodeos involved hard work, without a doubt they offered the cowboys a chance to show off their skills and have some fun. Their rodeos took place in makeshift corrals on the open range, much different from the rodeo grounds of today.

Visalia’s first rodeo as an entertainment event was held in 1927 on land that is now Recreation Park. Oscar Warren originated and dominated the one-day event and it proved to be so popular that almost yearly, rodeos followed. In 1932, a group called the Visalia Rodeo Association was formed and in the same year they purchased the McSwain property south of Tulare Ave and west of Court Street. This land became the second rodeo grounds. For some unknown reason, in 1940, the property was sold and the rodeo moved back to Recreation Park. But the war years caused interruptions to his annual event and general interest declined. In 1947 a group of individuals interested in revitalized the Visalia rodeo began looking at 40 acres of city-owned land on the east side of the airport as a possible new site. The location offered plenty of arena space, ample room for spectators and their vehicles and enough room for livestock pens. The Visalia City Council supported the plan and Visalia had still another rodeo location.
A good friend, Guy Shelly, recently shared a rodeo ticket he had saved from the 1942 Visalia rodeo. I doubt that many of these have survived over the years. Thanks, Guy, for saving this one, and for reminding us of our rodeo tradition.


***Thanks to all of you who identified the vacant Copeland Sports building on Mooney Blvd. as the site of the old Purity Store.

***Thanks also to all of you who helped determine the approximate date of the Visalia brochure in the last HH. Consensus seems to be that it was published about 1968, give or take.

***Just as a point of information, the alley behind Links/Midtown Sports was known as Shinbone Alley in at least the 1890s. (Apparently, it was named that because of a butcher shop located right off of the alleyway.)

***Doug Rains mentioned the Standard Oil fire at Santa Fe and Houston. He was wondering when it occurred. It actually started on Wednesday morning December 1, 1971. It was a big one, but fortunately there were no deaths or injuries, but lots of property damage, though.

An Injured Chambermaid Goes After a Menial. Mrs. Carrie Cummings, chambermaid at the Visalia House, last night horsewhipped a dining-room waiter named Frank Morrey. Mrs. Cummings’ husband was sent to the State prison some time since for attempting to murder John Mangan of Lemoore. Morrey lately induced Mrs. Cummings to secure a divorce from her husband, promising to marry her. Yesterday he refused to comply with the contract, hence the horsewhipping. San Francisco Call, June 4, 1893
Posted at 7:27 PM No comments:
Email ThisBlogThis!Share to TwitterShare to FacebookShare to Pinterest
Newer Posts Older Posts Home
Subscribe to: Posts (Atom)