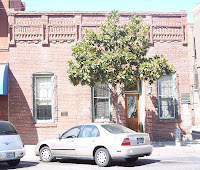 Congratulations go to Art Browning who was first to successfully identify the old brick Bradley law office building on Church between Main and Acequia. Great old building with nice brick pattern on top. 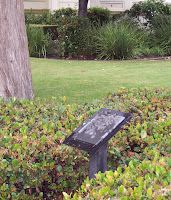 Now for the next mystery spot. It is for the very observant. I just happened to notice it for the first time a few days ago. The clues are:
1. This marker/plaque is mounted facing the street that was once used as the entrance to Visalia from the west.
2. The plaque is mounted very close to the site of the smallest park in the world.
3. The plaque commemorates “Visalia’s Tree for Youth.”
4. The property where this plaque is mounted once belonged to a pioneer who came from a well-known Tulare County cattle ranching family.

Where is this plaque? Good luck. 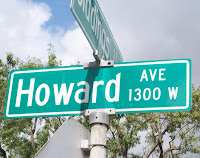 Recently, I talked with Rosalie Buszek Powell about her father Buz Buszek and in the course of that conversation she told me that her family was friends with Howard and his wife Iris Straughn in the 1950s. Howard was in the real estate business, and it was he that was responsible for the naming of both Howard and Iris avenues sometime around 1952.
Tartarville—A Veteran Community on Campus

In the last HH I included an aerial photograph of Mooney Blvd in 1950. As part of that photo was a great view of the little community known as Tartarville, made up of a group of houses built on the northwest corner of the Visalia College (Now COS) campus. After World War II veterans returning to their hometowns, found housing shortages. Towns like Visalia tried to deal with the house problem. The building trades department at the college built 24 duplex buildings as can be seen in this aerial photograph. Frank Tebeau, a current COS welding instructor, was nice enough to share some history. He said the buildings were occupied by college veteran students and their families. According to the 1947 Tartar Yearbook, the students of the college had a contest to name the special housing area and Pat Lehn had the winning submission calling it “Tartarville.” Anyone know when Tartarville was disbanded?

Wander In – Stagger Out

Recently, I was contacted by Cheryl Jackson, an HH follower, who shared that she had found a brass token with the word Sweeney & Necklausson, Visalia, California on it. She also has blue chips from “The Stag.” On one side of the brass token it says “Good for 12 ½ cent cigar.” Cheryl also shared that her father, Beryl Logan worked at the Wunder Stag from about 1950 to about 1965 as a bartender and “house” card player. Visalia’s Pete Sweeney is the son of Carter Sweeney who owned the Wunder Stag for a long time and shared this photo. The Wunder & Stag were separate establishments for a number of years and in 1918 they combined to become one. An expression soon developed: “Wander In and Stagger Out.” The Wunder & Stag history in Visalia is colorful and interesting. When combined, the Wunder Stag was located near 115 E Main

Street about where Links store is now. Thanks Cheryl for reminding us of this historical part of Visalia’s past. By the way, at various times these establishments were saloons, cigar stores, billiard parlors and restaurants.

Classic Postcard Reveals Classic Home
A loyal HH follower shared an interesting story with me recently. In the early 1970s her mother saw a man standing outside her Visalia home alternately looking at her house and then looking down at a postcard. She talked to the man visiting Visalia from Ohio and discovered he had a commercially made postcard with a picture of her Visalia home. The Ohio man then gave her the postcard. The house was built in 1916 and over the years it has gone through considerable remodeling, especially in 1938. In many ways it does not even resemble the postcard image. The family continues to live in the home and is proud of their Visalia classic. Check your postcard collection—you may have this one. If you recognize this home and have any information about it, please let me know and I’ll share it with the owner.

So many of you enjoyed the last aerial photograph of Visalia supplied by Bob Link, so I thought I’d include another. This one was also taken in 1950 and shows Mooney Blvd looking northbound from just south of Walnut Ave. What a difference 61 years made to Visalia! Enjoy.

***I received lots of comments on the noon horn. Thanks to all of you and especially Tony for sticking your voice out there to demonstrate. One more thing. I came across an article in 1878 from the Visalia Delta which said, “The steam whistle that proclaims the hour of noon to Visalians, is on the engine at the water works.

***Charles Loffland, an HH subscriber, commented on the old fire station photo after seeing it in the last HH. He remembered it, calling it a beautiful building and lamented that we lost it. Charles and others believe we need to preserve our old buildings in Visalia. I think it’s revealing that The Habit chose the 70-year old Mearle’s building and invested hundreds of thousands of dollars. Preserving our old buildings makes sense emotionally and economically.

***Regarding the Recreation Park playhouse mentioned a few postings back, Kim Gunter found out some things. She said, “Just spoke to Betty Anthony and asked her about the playhouse. She referred to it as the ball house. (She and her husband Dick lived in the house on the property from 1955 to 1964.) Nobody has a closer connection to Recreation Park than the Anthony’s. Betty taught most of us who grew up in Visalia to swim. At least those of us between the ages of 24 & 64. She said that earlier it was used for arts & crafts with the kids. Then they began to use it almost exclusively to store balls in, hence the name, The Ball House. She said that after the city decided to clear more of the property for sports and other activities, the house they lived in was sold and moved further north, their fence was demolished and so was the ball house, as far as she knows. A sad ending, but that was the way things were done in the mid-60s.”

***By the way, Harvey May of Paloma Development said he is planning to apply for a historic building plaque for the old Togni building on Main St. Glad to hear that Harvey.

***The mystery of the Ben Maddox Courts has been solved. I’ll share what has been shared with me, if you’ll email me.

***Thanks to Wesley Peck for all his Riggin Family history. He found some interesting material on a genealogy website.

Editorial Note: First of all let me apologize to my attorney friends—it appears lawyer jokes are not a recent phenomena. “Why are lawyers like a lazy man in bed in the morning? Because they lie first on one side and then turn over and lie on the other.” Visalia Weekly Delta, September 26, 1861
Posted at 7:46 PM 2 comments:
Email ThisBlogThis!Share to TwitterShare to FacebookShare to Pinterest
Newer Posts Older Posts Home
Subscribe to: Posts (Atom)