Click on photo for larger image
Thanks for visiting Historic Happenings! If you are not on the email list, and would like to be notified via email when a new posting of this newsletter is made, please email Terry Ommen at histerry@comcast.net. I will add you to the list. I will never share your email address with anyone without your permission.    NOTICE: You can now comment publicly and directly about topics on this blog. Just click on the "Comments" after the "Say What" portion and let your voice be heard! 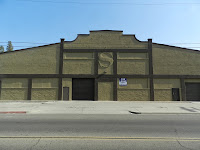 Russ Dahler was Johnny-on-the-spot to get the last mystery spot. He was the first to correctly identify the prune house on South Bridge Street across from Washington School. Nice work, Russ. I believe the big "S" on the building stands for Sunsweet, a company heavily involved in the prune industry, at least many years ago.

OK, here are the clues for the next one. Where is this building?
1)  The building was built in 1908
2) This building is just a very short distance from the old Mooney House
3) The building once held a German language church.
4) It is near a street named after a nearby park.
Good luck. 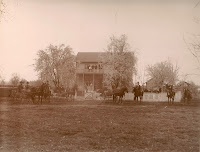 An Early Look at Mooney Blvd. 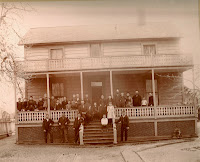 It is not often we get to see very old photographs of people and places on what we now call Mooney Blvd. Laura Spalding, a member of the Kelly family, shared these two rare old photographs. They both show the ranch house of Greenberry Marion Kelly and his wife, Sara Jane. Their house shown here was located just south of Whitendale at Mooney Blvd. Thanks, Laura, for sharing. These pictures are probably circa 1895. 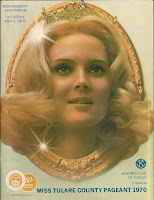 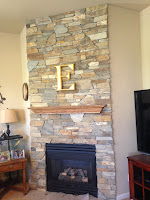 J.J. Newberry Letter is Proudly Preserved
Back in the day (pre-1970), Visalia's downtown was packed with shops and stores—many of them chain stores like Sears,Woolworth's and J.J. Newberry's. Over time the chains left downtown. J. J. Newberry was on the southeast corner of Main and Locust and when the store left town, Ben Owens, foreman for builder Al Pearson, was in charge of the building remodel. Ben could not bear to dump the letters that spelled out J. J. Newberry, so he salvaged some of the letters and distributed them among his family. Ben's daughter, Carolyn Edwards got one and displays her prize keepsake "E" to this day. Made of metal, maybe brass, the letter has hung on the wall of every house Carolyn has lived in for the past 42 years. She is proud to have it and considers it a treasure. 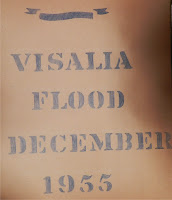 Recently Roger Maraist, retired Southern California Edison manager, shared a scrapbook that he had for the 1955 flood. It is labeled Visalia Flood December 1955 and is filled with newspaper clippings relating to the famous flood. Most of the material deals with the first of the two floods in 1955-56. The first flood in December was the result of heavy rain right before Christmas. The massive amount of water in such a short time was just too much for the banks of the channels around Visalia. The second flood was in January 1956, about a month later. It was caused by a huge log that blocked the flow of water in Mill Creek near what is now Court and Center. Thanks, Roger, for sharing this scrapbook with us.


Kate Wants to Level With Us 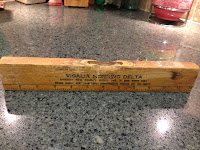 Kate Gibson Cates asked about the origin and purpose of the old ruler and level marked with Visalia Morning Delta on it. The Visalia Morning Delta and the Times merged in 1928 to create the Visalia Times Delta. That fact obviously makes this little advertising item pre-1928. I'm not sure why it was produced, but the explanation might be as simple as that it was a newspaper advertising promotional giveaway. Any other suggestions for Kate as to why this was made? Kate's family has deep roots in the Visalia newspaper business, so this little ruler/level is in the right home. Thanks for sharing Kate.

Old Visalia newspapers seem to be a worthwhile commodity. Several more have come in and of special interest is a complete 1859-1959 Golden Century Edition of the Visalia Times Delta. Dated June 25, 1959, this beautiful old newspaper is in remarkably good condition. As most of you know, Visalia had the oldest newspaper in the southern San Joaquin Valley, and as a result it is a absolutely wonderful source for historians. Thanks to the HH follower that provided this newspaper.

The Visalia Saddle Ropes 'Em in from Minnesota

Visalia had an interesting visitor a few weeks ago, all the way from Minnesota. R. Carl Moy is a law professor specializing in patent law. He has a great fascination with early saddles especially what is known as the Visalia Stock Saddle. The name Samstag is a name connected to Visalia and the saddle trade, also and Professor Moy is on the search for more information about him as well. So if you have any information on Samstag, please pass it along to me and I will get it to him. It was nice to spend some time with someone interested in another aspect of the history of our saddle—a saddle that helped put Visalia on the map!

***Pete Cowper asked about the history of the very tall antenna tower near Woodland and Walnut in Visalia. I heard from Lyman Treaster that it began as the tower for KTKC. Anyone have any other information to share about that tower? By the way, Lyman indicated that it was part of his job in the early days of that radio station to climb to the top of the tower and change light bulbs as they burned out. Yikes!

***In the mid 1960s Paul Spencer remembers as a young boy he and his friends would enter a rather rundown bar and card room on Main Street near what is now Links clothing store. It was great fun for the kids to watch the old men in the back room playing cards. Most of the time he didn’t stay long as he was chased out by management. He is curious as to what was the name of the place that he and his young friends visited. I have my idea, but I would like to hear your thoughts on the name of that particular cardroom/bar.

***For those who would like to know more about the devastating Visalia High School fire in 1912, you have an opportunity to read about it in an article in the December 2013 Lifestyle Magazine or you can read it in the magazine online at: http://issuu.com/lifestylemagazine/docs/lifestyle_dec_web
The story begins on page 18.

***Bruce Geiger recently asked about the Holt Block (north side of Main Street, west of Court). Fred S. Holt of the famous Holt family of Stockton (Caterpillar fame) built a large building on Main in 1886, and as a result the block became known as the Holt Block. I believe in the early 1930s much of the block was destroyed by a fire. Anyone have anymore information about the Holt Block?

***Once again the interesting little rooms with the numbers on the doors located in the courtyard area at the rear of the Palace Hotel building (Court and Main) have caught the eye of a curious passerby. These interesting little rooms were the bathrooms for hotel guests before in room bathrooms became vogue. By the way, the Palace Hotel is one of Visalia's centennial buildings, opening its doors for the first time in 1876.

People who drive a good, old and gentle team into town generally leave it standing unhitched. We saw one of these teams that never "runs" get scared the other day, and we can see no difference between an old trusty team and one that is young and not "trusty." The destruction was just as complete as if it had been a span of colts, wild and vicious.  Tulare Times, May 29, 1880.
Posted at 8:51 PM 5 comments:
Email ThisBlogThis!Share to TwitterShare to FacebookShare to Pinterest
Newer Posts Older Posts Home
Subscribe to: Posts (Atom)