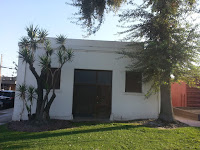 Congratulations to Steve Gerrard for being the first to
correctly identify the building that once housed the Railroad Express Agency. It is now one of the Southern Pacific Depot Restaurant buildings on the southwest corner of Garden and Oak streets. Nice work Steve!

Now, for the next mystery spot. Here are your clues:
1) This is a corner building
2) The building was at one time affiliated with the local telephone company
3) At one time you could get news here.
4) If you add up the numbers in the street address of this building it will total 12.
Where is the building? 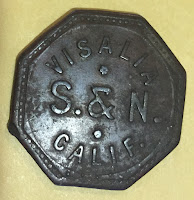 Kate Gibson-Cates recently inherited a cigar token from her grandmother. It is marked S & N Visalia, Calif. on one side and the other says Good For The Stag 12 1/2 Cent Cigar. Her keepsake is a beauty and originated from The Stag saloon and cigar store (100 block of E Main Street, south side of the street.)  It was owned by Carter Sweeney and Al Necklausson (S & N). It opened in 1921 and was a popular hangout and later 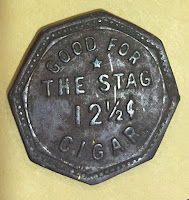 combined to become the Wunder Stag. A few of these old tokens still exist and surface occasionally. Thanks Kate, for sharing what are sometimes called "Good For" tokens. Anyone have any other Visalia tokens to share?

Church Street Before 1907
Recently Paul Green shared this real photo type postcard of Church Street in Visalia. It doesn't say whether it was north or south Church Street but it shows an unpaved street with horse and buggy marks in the dirt. Anyone recognize the cross street?  Off in the distance horses and buggies can be seen. This old postcard is postmarked on the back with 1907, so we know that this street photograph was taken in 1907 or before. Thanks Paul, for sharing this great old picture. 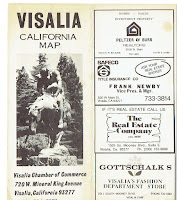 Visalia Map—A Half Century Old, Maybe
Phil Esbenshade recently shared a couple of images of a Visalia map he recently acquired. It is not dated, but has some clues as to its age. He was wondering when it was published and hopes someone can help him. The map was

obviously professionally printed and has some advertisers listed on it. Another clue—the map itself does not show the Royal Oaks Drive cul-de-sac. Anyone have an idea when this map was published? I'm thinking 1966/1967. 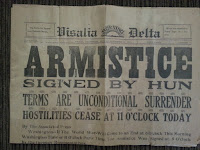 Armistice - A Cause for Celebration
Fairly recently, someone (forgive me but I don't remember who) shared this Visalia Morning Delta newspaper with me and I have to share it with you. It is dated November 11, 1918, and the bold headline reads ARMISTICE. The 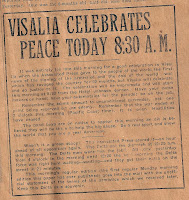 sub headline anxiously announced that the "World War will come to an end" at 11:00 o'clock Paris time and that the armistice was signed at 5 o'clock by German representatives. Today we celebrate Veterans Day on the same day. If you look at the second image, you will see that Visalia celebrated this great day with a parade.

WPA—More Than Just Buildings
The Works Progress Administration (WPA) was one of the federal organizations of the 1930s-1940s during the Great Depression era. The federal government was concerned about the nation's high unemployment, so they were working with local government to try 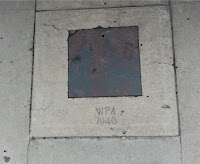 to get public work projects done. Visalia had several buildings built with WPA funding, but obviously sidewalks, storm drains, etc. were part of that program. Richard Zack recently found some signed work by the WPA in Visalia on one of his walks. These two locations are in front of Miller's Mortuary in the sidewalk on Goshen Avenue near the cemetery. These are the first "signed" WPA projects (other than buildings) that I have seen in Visalia. Good observations Richard, and thanks for sharing. 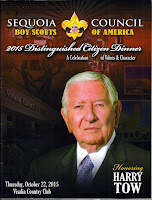 Harry Tow—A Historian is Honored
On Thursday, October 22, 2015, former Visalia City Manager Harry Tow was honored as the Sequoia Council Boy Scouts of America Distinguished Citizen for 2015. As Visalia City Manager from 1958 to 1972, Harry was at the helm of Visalia's serious growth (population went from 15,000 to 30,000 during his tenure.) The 1960s were especially eventful and Harry was right there to witness it. He is always willing to share. By the way, when he left as city manager, he founded Quad Consultants and he still lives and works in Visalia. 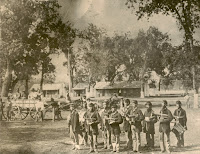 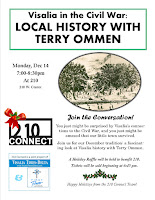 When the American Civil War began (1861), Visalia wasn't even a decade old. Many of the settlers were southern born and supported the Confederacy during the war. As a result, the southern sympathizers made life difficult for the northern supporters. Concerned about Visalia's negative influence in the Union war effort, the north established Camp Babbitt just outside the Visalia city limits and stationed troops there to keep the peace. Peace was hard to come by and the little town suffered enormously. Here is a photograph of Camp Babbitt. On Monday, December 14th at 7:00pm I will present a historical program on Visalia's Civil War at the 210 Center in Visalia. See the electronic flyer attached for more details or email me.

**I got such a chuckle from Lori Chan Luna who shared a childhood story. For me it was so cute I have to share it with you. A few posts ago I included a small piece on Ralph Drath, a long time Visalia educator. After reading it, Lori reminisced and wrote, "When we were attending Highland Have School so many years ago, Mr. Drath was Principal. Everyone called him Mr. Giraffe and it wasn't until I left Highland to attend Houston Avenue School that I realized his name was actually M. Drath! It seems to me that maybe because he appeared so tall, we students figured that the name was appropriate! Anyway, thanks for helping me to remember this kind man."

**Richard Garcia has a question. Can anyone help? "In the early 1970s my favorite hangout was a classy little cocktail lounge in Visalia's Chinatown called the Nine Dragon Room. Located where the Hong Kong Market Place Restaurant is currently, its entrance was off Center Street. The entire length of the wall behind the bar (opposite side of the wall behind the current bar) was a mural of 9 beautiful dragons. A barmaid named Katie told me that an artist from San Francisco who was a heroin addict had painted it years ago. That's all I remember through a smoky haze of black lights, cigars and Canadian whiskey. Was it a canvas that someone saved? A wall that was covered? Or was it lost forever? Anyone have a photo?"

** It you'd like more history of Visalia's St. Charles Saloon and its collapse, read the story in the Lifestyle Magazine for November 2015, beginning on page 12, or you can read it online at http://www.visalialifestyle.com/history/

For the Lord's sake somebody, let up on our wood pile. If you can't steal from someone else, give us the proper direction, and we will send a load. Visalia Delta, December 25, 1862 (Commenting in frustration after repeated thefts of their firewood.)