Click on photo for larger image
Thanks for visiting Historic Happenings! If you are not on the email list, and would like to be notified via email when a new posting of this newsletter is made, please email Terry Ommen at histerry@comcast.net. I will add you to the list. I will never share your email address with anyone without your permission.    NOTICE:           You can now comment publically and directly about topics on this blog. Just click on the "Comments" after the "Say What" portion and let your voice be heard! 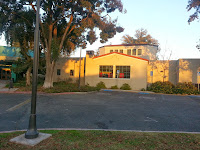 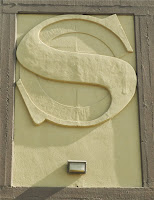 Okay, now for the next one. Here are your clues:
1) It once housed the California Prune and Apricot Grower's Association.
2) As a result some people called it the Prune House.
3) It is located on the first named street in Visalia.
4) It is a huge building.
Where is this building? Good luck.

Bruce Geiger shared that he had a couple of small dishes in his collection. They are old and marked: Grammar School, Visalia, California. Both of them show the Tipton-Lindsey School. It was built in 1891 on the site where the Tulare County Library is today. The dishes were produced by and marked

"Wheelock, Dresden Germany Made in German for S. Sweet & Co. Visalia, California." By the way, the school depicted on these dishes had nothing to do with towns of Tipton or Lindsay. This school was named after the prominent Visalia pioneer named Tipton Lindsey. The brick school apparently was poorly constructed and within a couple of decades after it was built, it was condemned. In 1920 it was torn down. Thanks for sharing these important treasurers, Bruce.

On October 11, 1974, the Visalia Times Delta issued a Centennial Edition commemorating the city's centennial 1874-1974.  This historical newspaper celebrated Visalia's incorporation year of 1874. The newspaper was issued in 1974 and was a huge success with various historical sections highlighting Visalia's rich past. It is a keepsake edition and is an important memento from Visalia's past. It has played an important part in keeping Visalia's history alive. HH follower Gary Holder was kind enough to share his copy. This edition can still be found occasionally, but it's getting harder to find them. Thanks, Gary.

Lion's Club—Visalia Safety Patrol
Richard Drath is at it again. This time he found a Lion's Visalia Safety Patrol hat. As a young boy attending Houston School in the late 1950s, Richard wore this one and carried a stop sign on a pole and escorted other students across streets near the school. It was provided by the local Lion's Club where his father Ralph was a Lion and he was a well-known principal (Highland and Houston schools in Visalia.) Do elementary school children do crossing guard duty anywhere anymore? I doubt it. 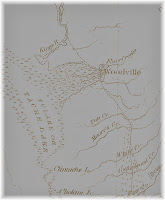 Visalia Was in Heart of Four Creeks
Occasionally questions have come up about the term Four Creeks. In 1850 and the few years that followed, our area was called Four Creeks Country. It was a fertile delta region recognized by many and  Visalia would have been right in the middle of it. In 1853 the Williamson survey party came through here and documented their observations: "From the level of the arid and treeless plain bounded on the west by the equally barren mountains, we made a sudden descent of about ten feet to the bottom land of Four Creeks. Here the aspect of the landscape suddenly changed. Instead of the brown, parched surface of gravel, to which the eye is accustomed on the surrounding plains, we find the ground hidden from view by luxuriant growth of grass and the air fragrant with the perfume of flowers. The sound of flowing brooks and the notes of the wild birds greet the ear in strange contrast with the rattle produced by the hot wind as it sweeps over the dried weeds and gravel of the plain. The whole scene is overshadowed by groves of majestic oaks and the eye can wander down long avenues of trees until lost in the shadows of their foliage. This scene of natural beauty is the result of natural irrigation, the ground being abundantly watered by the Pi-piyunna [Kaweah] river, which supplies the water that forms the Four Creeks. In fact, a broad delta is here formed between the Tulare lake and the mountains, and the profuse vegetation may not only be referred to the presence of water, but to the fertility of the soil, which is alluvial and is frequently enriched by overflows of the creeks."

HH follower Pat Willis suggested that I include something about Visalia pioneer aviator Sol Sweet. The Sweet family of course was well-known for their big department store in town, but Sol Sweet made a name for himself as a local aviator. He learned to fly in 1924 and in 1926 he bought his first airplane. A year later Sol Sweet and Eddie Deeds were flying from Porterville to Visalia when the plane developed mechanical problems. They were forced down on Putnam's Field, an area of open land near what is now Highways 198 and 99. The emergency landing site became the Visalia Municipal Airport. Sol Sweet is shown here on Sol Sweet Day at the Visalia Airport in 1988. The famous aviator is on the left with Bonnell Pryor on the right. 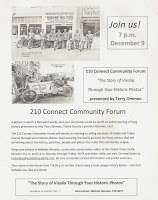 Amazing Historical Photographs Appearing at 210
On December 9th starting at 7:00pm at the 210 Center at Locust and Center streets, there will be a historical photo program. The Visalia Times Delta has been receiving interesting photos over the last week or so submitted by people willing to share. The photos submitted are sure to be interesting, and it will be fun to display  and discuss them. It is a free program from 7:00-8:30pm, so come by and join in on the discussion of these historic pictures. Click on this brochure for additional details.

***Still no definitive answer about the statues at Mooney Grove Park and the possible connection between them and possible drownings in the pond. I'm sure the answer is out there somewhere, but it is going to take some more detective work. Did the drownings occur or are they urban legend?

***The 2014 historic calendars are finished? They have been provided this year by the Central Valley Community Bank, the financial institution that took over the project from Visalia Community Bank. The calendars will be distributed free of charge at the 210 Center on the evening of December 9th at 7:00pm during the photo program. Come by and pick your up.

***In 1952 Visalia was rocked by the 7.7 Tehachapi earthquake. If you'd like to read more about its effect in Tehachapi and Visalia, go to the November 2013 Lifestyle Magazine starting on page 18. You can read it online at http://issuu.com/lifestylemagazine/docs/lifestyle_nov_web

Fashion is a tyrant whose commands most people obey. Nevertheless many of us know that woman is never so graceful, never so beautiful as when gowned so as to leave her body unconfined by braces, straps, strings and corsets.  Daily Visalia Delta, March 25, 1904
Posted at 7:25 PM 2 comments:
Email ThisBlogThis!Share to TwitterShare to FacebookShare to Pinterest
Newer Posts Older Posts Home
Subscribe to: Posts (Atom)