Please click on any photo for a larger view.
Now This is Strange!

In the last issue of Historic Happenings, I mentioned Hugh Garrison, the first Visalia police officer killed in the line of duty in 1946. Coincidentally, the day after I posted that story, a non-subscriber to HH, a total stranger to me, related a story about her brother and his connection to Hugh Garrison. It seems her younger brother had been working at the Visalia T

heatre at Main and Garden streets in the late 1980s or early 1990s. One evening, while it was slow, he and another co-worker were playing with a Ouija Board and at the time neither one of them heard of Hugh Garrison or the decades earlier shootout that had happened just steps from the theater. As they worked the Ouija Board it kept spelling out the word “Hugh” and they could not understand why. It wasn’t until years later when they heard about the Hugh Garrison killing and only then connected the officer’s first name to the repeated Ouija Board message. Sounds like a “Twilight Zone” episode, doesn’t it?
Rawhide – A New Evolution for Visalia Baseball

Tom Seidler, President and General Manager of Visalia’s Rawhide professional baseball club. is very aware of the town’s love for baseball and its long history with the game. With that in mind, Tom and Donny Baarns, the team’s announcer, are pulling together information which ultimately will become part of a book on the history of organized baseball in Visalia. Not just professional bas

eball, but really a broader coverage of the national pastime as it was played in our town. Now here is what they would like from us. If we, or friends or relatives of ours, played professional baseball or any organized baseball in Visalia, they want to hear from us so they can capture the story. Photographs or memorabilia are bonuses, so please feel free to contact Tom and tell him your story about baseball. Now is your chance to be part of this project. (Attention Art B, I told Tom and Donny a little bit about you and your love for local, and they want to hear from you.) Tom can be reached at (559) 732-4433 or email him at tom@rawhidebaseball.com
Was it Suicide or Homicide?
I still don’t have the “green light” to tell the complete story of the life and death of one of Arizona’s native daughters named Celia. As I mentioned earlier, Celia still has living descendents in Arizona and they probably do not know of the kind of work that Celia was in (hint: sometimes called the world’s oldest profession) or how she came to her death. It was officia

lly ruled a suicide, but there is some question about that and Dallas Pattee agrees her death is suspicious. But I have written the local part of Celia’s story and it will be published next month in the local Direct Magazine. If you don’t get the magazine for whatever reason, let me know and I’ll email you a copy of it. Celia’s story is very interesting one! By the way she is buried next to the notorious Visalia character “Si” Lovern in the Visalia Cemetery.

In 1915 Solon Borglum’s sculpture called The Pioneer was in the Pan Pacific International Exposition in San Francisco. After the Expo was over, Tulare County requested to have the statue and in 1916, permission was granted and in that year it was placed in Mooney Grove Park where it stood until May 28, 1980. On that day the plaster of paris statue totally collapsed “probably because of the earthquake of that day.” Was the earthq

uake truly responsible for its demise? Recently, I was contacted by a “Christian” man who claimed credit for the devastation. His story is summarized as follows: He was working at Sprague Electric across Mooney Blvd. from The Pioneer statue. Sprague was going to have a company picnic near the statue and he was upset that the statue was being held in such high regard—almost idolic. Upset over this almost idol-like status, he fervently prayed that the statue would collapse and 2 days later on May 28, 1980 it did. You be the judge!

What a Pleasant Surprise and a Good Read!
Thanks to Bill Allen, I received a signed copy of a new book called From Arvin Migrant Camp to the American Dre 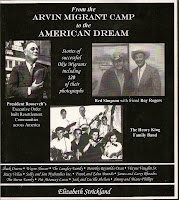 am written by Elizabeth Strickland published in 2008. In the book the author documented, with firsthand accounts 56 “Okies” that migrated to California during the Great Depression. The author herself worked the fields of California around Bakersfield and lived in a migrant farm labor camp. In her book, Tulare County migrants are included and one of the chapters deals with Tagus Ranch. But chapter 14 was especially enjoyable as it was devoted exclusively to the Beene family who ended up in Visalia. Tom, the baby of the family, was actually born in Visalia and worked in the fields with his family. Today, Tom Beene is the President and Chief Executive Officer of Visalia Community Bank. If you need help finding the book ($20.95), let me know, or you can email the author at rt66californiafields@yahoo.com

Assorted
{{}} As of Sunday, January 11th, Delora Buckman, of Visalia, will be President of the Tulare County Historical Society. She is part of the of a very prominent Tulare County family. If you know her or even if you don’t email her and wish her the best. Her email is dbuckman@sbcglobal.net

{{}} During the Depression of the 1930s, Mineral King Bowl was hand dug by WPA workers using horses and mule teams pulling Fresno Scrapers. Dozens of teams were used to dig the hole to create the bowl and Peggy Peterson tells us that her father, Allan Grant ,was one of those workers. That is some hole to be dug by hand!

{{}} Webb & Sons and the subcontractors staked out the new museum expansion site at Mooney Grove Park a few days ago. Obviously we’re getting closer to groundbreaking.

{{}} St. Mary’s Catholic Church is busy preparing for their big 150th birthday celebration coming up in 2011. The church started in 1861 is the oldest Catholic church in the southern San Joaquin Valley, and was a major institution in the pioneering years of Visalia and the southern San Joaquin Valley. Parishioners and others are compiling a history of the church and a history book will be the result. Sounds like Sheila Caskey Holder will be part of that team. Good addition there!

Visalia is one of the prettiest inland towns in the State. One of the four creeks passes within the limits of the town and lends it a charm not possessed by any other. Its banks are fringed with charming groups of ancient trees, and clusters of exotic plants intersected with the bright white homes of the people. An observation made by a reporter from the San Francisco “Alta” Newspaper in 1866.
Posted at 7:49 PM No comments:
Email ThisBlogThis!Share to TwitterShare to FacebookShare to Pinterest
Topics: Baseball, Charles "Hugh" Garrison, Elizabeth Strickland, Solon Borglum, The Pioneer, Visalia Rawhide
Newer Posts Older Posts Home
Subscribe to: Posts (Atom)