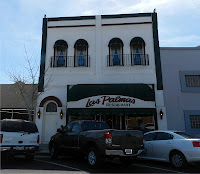 Congratulations go to Joseph Vicenti who was the first to identify the last mystery spot as the Las Palmas restaurant building on E. Main. Many of you correctly identified it, but he was the first. By the way, Joseph had an edge as he had previously researched the building’s history. Nice work Joseph!

Okay, here are the clues for the next one:

1) The structure was built about 1876 as a residence.
2) Superior Court Judge Wheaton Gray lived there.
3) The home was later converted into a funeral home.
4) People now hold meetings there.

Army Float Parade Entry
Recently, Guy Shelly, a long-time Visalian, was going through a family photo album and found this interesting shot. Probably taken about 1950, it shows Army soldiers with mortars on the back of an Army truck. This apparently was a parade entry during the Korean War era. The background of the photo shows south side Main Street between Court and Locust streets. J. J. Newberrys was at 127-129 W. Main, Locey Shoes at 119 W. Main and the Janzen Jewelry store with their street clock was at 111 W. Main. Notice the people on top of the building dangling their legs over the side. Can you imagine people to do that today?

Railroad Bridge Buried Under the Street 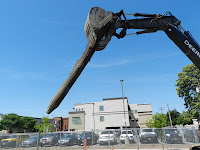 For the last month or so the City of Visalia has been trying to fix a “sagging surface” problem on Santa Fe Ave. just north of Main Street. It was believed that there was something below the street level that was causing the soil to give way. It looks like the mystery might have been solved. When several exploratory holes were dug under Santa Fe they found some very large timbers, some vertically driven into the soil as deep as 20 or more feet. It appears the crew had uncovered remnants of the wooden bridge built by the San Francisco and San Joaquin Valley Railroad to span Mill Creek. The bridge was removed, however the timbers that were below the surface were apparently left in place. It appears that some of the below surface lumber rotted away, thus causing the ground to sag. The bridge had huge redwood posts driven vertically down deep into the soil to create the infrastructure needed for the bridge to support the heavy train. Notice this redwood post had one end carved to a point to make it easier to drive into the ground. As you can see, one of these is being pulled out. Mike Porter, with the city engineering department brought this discovery to my attention. By the way, the inaugural train for the SFSJVRR came into Visalia on September 9, 1897, which indicates the bridge was constructed in early 1897. The line later was bought by the Santa Fe.

Before the Fox Theatre restoration, the landmark theater had been turned into a 3-plex. In order to accomplish the conversion, the theater owners added a floor-to-ceiling wall dividing the ground floor into two. When creating this wall, they totally obliterated the face of the genie that was sculpted above the stage. When the restoration began, George Pope who was then the lead restoration manager, invited Jaime Hitchcock, a local artist, to give his thoughts on restoring or more accurately, reconstructing the sculptured face of the genie. Jaime had experience and offered to rebuild the face, donating his time. Working only with a photograph, Jaime worked about 70 feet above the floor on shaky scaffolding with poor lighting and uncontrollable temperature fluctuations. As he worked on the project, sometimes his 6 year-old son, Tanner and his 4 year-old daughter, Calli, played on the floor of the gutted theater. Jaime finished the genie but then had to reconstruct an obliterated tile panel that had also been destroyed below the genie. He had an idea. He shared his idea with George and the result was a reconstructed decorative tile with a cast handprint belonging to his daughter, Calli on top of the panel with the word “beauty” next to it and his son, Tanner’s print on the bottom with the word “strength” next to it. What a great idea for an artist’s signature. Next time you are in the Fox look up at Jaime’s wonderful work on the genie and take a special note of his creative and lasting tribute to his children. If you look closely, the handprints can be seen from the seating area. George calls Jaime a “wonderful artist” and hear, hear to that! Thanks Jaime for generously sharing your wonderful talent and leaving a little Fox secret for future theater goers to enjoy. Note: This story was not Jaime’s idea, it was mine. It needed to be told.

Sue Gunderman shared a great collection of photographs with me recently showing the groundbreaking and celebration party for the Oval Service Center—the building that sits at the south end of the Lincoln Oval Park. It appears that the dedication party for the groundbreaking was held across the street at the old Rainbo bakery building (now restored) just to the south of the Oval Park. The celebration was a large one and many prominent people were in attendance. The collection of photographs is undated, but the Oval Service Center building was built in 1983. Can you believe it—it’s almost 30 year old? The groundbreaking photograph shows an artist rendering of the service center building and the dignitaries from left to right are: The late Visalia Chief Building Inspector Ben Owens, Mayor Berkley Johnson, Oval advocate Pat Maxwell Finger, and late Council Member Pete Peterson. Thanks Sue for sharing these pictures, and thanks to your now, 93 year-old mom, Louise Gothard for taking these pictures. By the way, Sue’s father, Joe Gothard, now deceased, worked at the Rainbo bakery for over 50 years and his father more than 30 years before him.

Recently Fred Weber, long time land surveyor in Visalia, mentioned to me that he had a photograph of Laurence Moye that had been given to him by Larry Otter, another surveyor. I had never seen it. Moye was the well-known Tulare County Surveyor (an official position.) His name appears on many early Tulare County maps. He served as the county surveyor for a lot of years and for a time was Visalia City Engineer. By the way, the lady in the photograph is unknown. Could it possibly be his wife? Also here is his re-election card, probably from about 1920. Thanks, Fred for sharing.

***Many of you responded to the question about who had the same phone number for the longest period of time. Thanks for all your responses. Looks like the winner is Charles Streeper, who has had the same phone number since 1947—that’s 65 years! Amazing!
*** The Hyde Ranch Dairy story in the last HH posting caused many of you to wonder about other Visalia area dairies. Pratt, Campbells, Swansons—can you think of any others? Also the subject of milk bottles came up, too. Anybody know what VMDA stands for on a milk bottle? Also was there a dairy associated with VMDA?


***Gary Holders mentioned that the “Spot” drive-in on Court Street. He said it was more popular than Mearle’s for teenagers in the 1950s. Any Spot stories?


***Barbara Hinds Joseph shared that her family had home milk delivery from Hyde Ranch Dairy and she remembers that at the time, milk was not homogenized. She recalled that on cold mornings the cream would rise and freeze above the top of the bottle. The cap would be sitting on the top when they retrieved it from outside.

During the last few nights a thick cloud of smoke has been wafted over town. It was caused by the smudge fires on the fruit ranches near this city. Visalia Daily Morning Delta, April 2, 1896