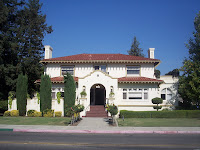 Wow, James Hitchcock has done it again. For the 3rd time in a row he has been the first one to identify the Mystery Spot. This time he correctly identified the Dudley House on the northwest corner of Main and Giddings. This beautifully restored home is now a business office. Benjamin and Helen Dudley built this beautiful structure in about 1915.  Amazing house and amazing work, James—congratulations!

Now for the new one. Where is this building? Here are your clues:
Good luck.

James M. Burke, born in Placer County, California in 1879, came to Tulare County and served as a Tulare County Deputy District Attorney from 1911 through 1919.  He was also in  private practice and was on the Visalia City Council for a number of years. Burke was well respected and was involved in many civic activities and   played a leading role in the creation of Central Valley [Water] Project. He died in 1940 and a Visalia street is named in his honor.

The Habit Moves Forward with Mearle’s
Things seem to be moving along with The Habit’s plan to open their restaurant in the 1940s Mearles’ building. A meeting was held recently with “The Habit” executives and they seem excited. They chose the site because of its amazing history and plan to incorporate and honor as much of it as they can. It’s just another great example of how historic buildings attract positive attention and become the reason businesses are attracted to them. Enlightened businesses recognize that history sells! The new restaurant will not be Mearle’s but it will be a new chapter in the life of this 70-year landmark building.
Remnants of the Golden State Highway Found 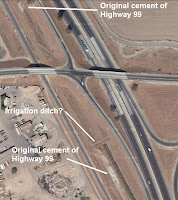 Sometime back, Dana Lubich shared a discovery he made. After looking at an old airport photograph showing part of Hwy 99, Dana got an itch to go exploring. He looked at satellite images of the area and walked the airport/Hwy 99 area and guess what, he found remnants of the old Golden State Highway or what we now call Freeway 99. Shown here is a fairly recent satellite image of the Caldwell overpass at Hwy 99 and it was near there he found small sections of the old concrete roadway. By the way, I don’t recommend exploring freeway areas as they can be dangerous. Dana is a a very talented history detective and his discovery is very interesting. Exactly how far back these old concrete remnants date is unclear, but we know that pavement, not concrete was used on the roadways in the 1920s thru at least the 1930s. Thanks for sharing, Dana. 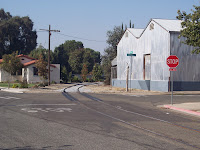 Have you ever wondered why the railroad tracks coming into Visalia from the west have a dramatic curve near Recreation Park/Rawhide Stadium? They didn’t always. When the first train depot was established in Visalia in the 1870s near the stadium, the tracks were straight and ended at the depot. When the depot moved to Oak and Church streets (Depot Restaurant site) in the 1890s, the tracks had to be extended. In order to lay the tracks to the new depot, with an Oak Street alignment, an “S” curve was necessary. This photograph, looking west, shows a part of that curve at Oak and Johnson streets.
69-Year Old Visalia Sweater Surfaces 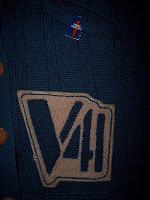 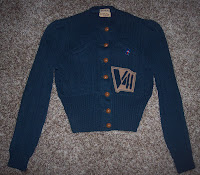 Recently, I was contacted by a man who lives in Fresno and he shared an interesting piece of Visalia history. It is a dark green Visalia High School girl’s sweater with a “V41” patch on it. It is absolutely gorgeous in design and condition. It belonged to Florence Faria, who was a relative of the Fresno man’s wife and Florence attended school here. Anyone out there know her? According to the label it was sold at Schwabs in Visalia, but I can’t find any information on Schwabs. Does that sound familiar to anyone? Notice also the little metal pin on the pocket that says “Fight Infantile Paralysis” which is more commonly called Polio. Really amazing piece of Visalia history! 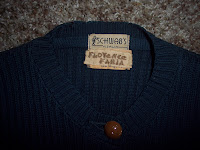 As was mentioned in a previous HH, the City is in escrow on the old site of Fort Visalia—a place recognized really as the beginning of the town. Ideas have been circulating about how best to commemorate the landmark site. Should we re-create the fort, re-create part of the fort, or do something else to recognize the birthplace of the city. If you have any ideas please share those with me and I will make sure they get to the appropriate people. Susan Mangini, and architect Michael Kreps are working on some ideas as well. No pictures exist of the old 1852-53 fort, but we have a word description and based on that, here is a rendering of the fort prepared by Dave Smith. We have a real opportunity here so let the ideas flow!

***Bill Allen asked recently about 2 black lava rock houses (both in the shape of a conical beehive) that reportedly were on the outskirts of Visalia. Someone mentioned them to him, but we don’t know anything about them, including location. Anyone ever heard of them?
***Claudia Allred Ward is on the hunt for the builder of the “McSwain Mansion”---the beautiful house on the southwest corner of Court and Tulare avenues. The house is now a dentist’s office but was made famous by Dr. Thomas O. McSwain an early occupant. Dr. McSwain is the grandfather of Claudia and any help in trying to pin down builder or date of construction would be appreciated.
***More famous Visalia visitors are being added to the list. Karen Kirkpatrick recently added Bob Feller (famous baseball hall of famer). She also added Buddy Epson (actor). But clearly her favorites are Mike Lookinland and Christopher Knight. Both of these gentlemen are better known as Bobby and Peter Brady, stars of the old tv show “The Brady Bunch.”
***Some of you continue to try to identify the old Acme Beer delivery truck that was posted a few HH issues ago. I think Jay Belt has found the answer—a 1936 C-1 International.
***A number of you have visited San Antonio, Texas and have enjoyed their river walk. Couldn’t a segment of Visalia’s Mill Creek become a river walk? Jennifer Allen Gomez wonders about pedestrian and recreational trails along the exposed waterway!

“Tuesday morning, after a most refreshing rain during Monday night, clearing the atmosphere and washing the leaves of our majestic oaks, afforded a most beautiful view from the dome of our courthouse. We observed for several hours citizens gazing, stretching their optics towards the lofty peaks eastward, and level plain westward, toward Tulare Lake. The view that morning was grand and Professor Bienstadt would find it a profitable occupation to devote a morning and evening to observation, as it will realize him a rich scene of Tulare valley, not to be excelled anywhere in the state. The dome of our courthouse has become a favorite place of observation.” Visalia’s Tulare Times, June 2, 1887
Posted at 7:16 PM No comments:
Email ThisBlogThis!Share to TwitterShare to FacebookShare to Pinterest
Newer Posts Older Posts Home
Subscribe to: Posts (Atom)