Peter Cowper jumped all over the latest mystery spot and he did it in record time. He identified the correct building as the 210 Center on the northwest corner of Center and Locusts streets (Studebaker Corner.) Good work Peter. Actually, over 40 of you got this one.

Okay here we go with the next one. The clues are:
1) The business in this building was known by the initials REA
2) The company that occupied this building shipped lots of freight
3) The front and back of this building have the same architectural features
4) If you add up the numbers in the street address it totals “9”
Good luck. 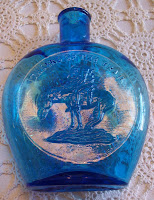 Tucked away in private collections are amazing pieces of Visalia memorabilia and history. Jim and Shirie Drath have been very generous in sharing their family’s collection of Visalia memorabilia. And now Richard Drath has shared with us his special finds. The blue or aqua bottle was a bottle made especially for the Visalia’s centennial celebration in 1974. It is embossed on one side with The End of the Trail statue and on the other side it has the embossed 1974 centennial celebration information. By the way, 1974 was the 100th anniversary of Visalia’s incorporation. It is a handmade bottle, very limited edition, made by the South Jersey Glass Company, actually called the Clevenger Bros Glass Works out of Clayton, New Jersey. This bottle is a beauty. The other item Richard shared is a tin container full of Visalia Pride Olive Oil. This unopened tin was packed by Superior Olive Products Co. in Visalia. Looks to me like it is from the 1940s. Thanks Richard for your generosity.

ed the service. The congregation continued meeting at different locations, but the first church building was completed in 1894 and is shown in here a linoleum cut by Alice Rouleau in Corson’s book. The second photograph is the second St. Paul’s Church located at Center and Encina built in 1898. Hope this helps and thanks for asking Kelly.

Barbara Hinds Joseph has been sharing information with me about her father Merrill Hinds. Merrill lived with his family in Visalia at 913 W Noble Ave. He was on the California Highway Patrol from 1935 to 1964 and much of that time as a motorcycle traffic officer. He worked out of the Visalia office until 1954 when he transferred to Santa Cruz. While he worked in Visalia as a traffic officer, he also worked with Wayne Wilson at Wilson Cyclery, as a second job. Merrill loved motorcycles. The first photo shows Merrill standing by his motorcycle 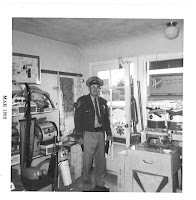 with his daughter Marilyn in front and Barbara sharing the seat in the back. The house in the background was across the street from the family home—a house that no longer stands as it was taken out when the 198 freeway was put through. The second photo is Merrill in March 1962 at Santa Cruz, shortly before retirement. Barbara, thanks for sharing some of your family photos and history. 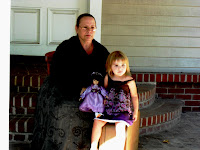 Practically Preposterous Walking Tour—Women and Children First
The Literacy Center here in Visalia has something special in store for us. Based on, at least in part, the historic record of the 1862 Visalia flood, the Literacy Center is planning on presenting a very entertaining and historical walking tour. Here is what they have in store: In 1862, Mary Brown, her two-week old daughter, her sister Charlotte Dineley and her three-week old daughter floated around Charlotte’s back yard on a carpenter’s bench. This was not a play date for the children. The mothers and babies were waiting for rescue from the rising flood waters of what is the worst flood in California history. Learn what happened to the sisters and their daughters at the Practically Preposterous Walking Tour sponsored by the Tulare County Library Literacy Center on September 23rd. 3 hour-long sessions are scheduled, one each at 4pm, 5pm and 6pm. Six stops will be made in the old Visalia downtown area with volunteers acting the parts of Visalians affected by the flood. The tour is a fundraiser for the Read to Succeed Literacy program. Tickets are $15 and can be purchased at the Literacy Center, 417 N. Locust Street, Visalia until September 16. No tickets will be sold at the event. For further information, call 713-2745.

*** Dana Lubich has been documenting the transformation of the Mearle’s building into The Habit. He has taken hundreds of photographs and video clips and is in the process of deciding how to present the story. What a nice contribution to Visalia history and the story of the Mearle’s building Dana. Thanks. I know whatever you do will be very professional.
***Bob Miller, a HH follower, told me that years ago about noon a whistle in Visalia would blow. He said the whistle was so loud that on some days it could be heard all the way to Mooney Grove Park. Does anyone else remember it? Was it a siren or just a long blast on a whistle? I’d like to know more about that if you have more information. When did this whistle blowing stop?


** *Bob Miller also remembers what he called the 1961 Halloween Bash. According to him there were at least 10,000 kids on Main Street on Halloween and there were an abundance of eggs and water balloons. I can see where this is going! Anyone remember this? By the way unless there was a murder involved, the statue of limitations has expired, so you can come clean. What was so special about that particular year or were all the Halloweens events in the ‘60s that rambunctious?
*** Carole Mathewson who grew up in Visalia has a question. She recalls as a young girl in the mid to late 1940s seeing an old man with a long white beard with a horse and buggy. She recalls seeing him as she sat on the benches by the library. He would go down Locust Street in the buggy and he would tie up his rig behind the old Purity Store on the northeast corner of Locust and Center. By the way, in the 1940s horses and buggies as a means of transportation were very unusual in Visalia. Any ideas as to who this bearded gentleman was or what he was doing?

In Spanishtown, Monday night, Wm. Cochran, while under the influence of liquor, drew his revolver, commenced shooting promiscuously, and was finally arrested by the City Marshal. In the melee he drew a knife and cut the hand of Sheriff Wells in two or three places. On Tuesday he was tried before Justice Johnson and fined in the sum of $41.Visalia Weekly Delta, April 7, 1882

Posted at 8:10 PM No comments:
Email ThisBlogThis!Share to TwitterShare to FacebookShare to Pinterest 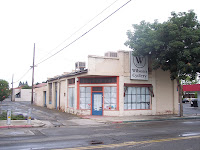 Congratulations go to Joseph Vicenti who was the first to get the latest mystery spot. He correctly identified the old brick building located on the west side of West Street between Main and Center streets—probably best known as the Wilson’s Cyclery building.
The next myste

ry spot should be easier. Here are the clues:
1) It is located on Studebaker Corner
2) Divine intervention helped to save this building
3) At one time this building was connected to “Monkey Wards.” 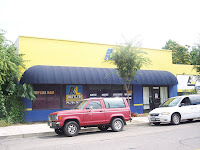 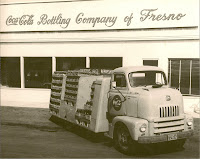 Art Browning, a loyal follower of HH, worked for Coca Cola from 1959-1969 delivering coke products throughout Visalia and the general area. As a result, he knows a lot about Visalia’s earlier businesses and buildings. Here is his 1953 era International delivery truck in front of the company location at 1020 E. Acequia (northwest corner of Edison and Acequia). The local Coke Company was owned by Coca Cola of Fresno. Building still stands today but hardly is connected to Coke. Thanks, Art for sharing. 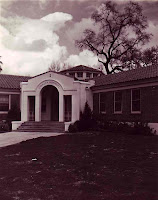 In the last HH, I displayed a fairly poor photograph of the Kaweah Hospital. Marian Cote found a couple better photos that I want to share. They are part of the “California’s New Deal Project.” Sure glad they found these pictures. In the aerial shot the hospital is in the foreground and you’ll notice the Fox Theatre in the

background. Thanks for finding these photographic treasurers, Marian.

Interior View of the Palace Hotel
Back in May, HH included a couple interior pictures of the Hotel Johnson. Since then I have had a request from Kaci, an HH follower, for an interior photo of the Palace Hotel. The Palace dates back to 1876. It has gone through a number of remodels and changes, but the building still stands on the northeast corner of Main and Court. Notice the old picture hanging on the wall.

What Happened to the Playhouse at Recreation Park?

Sue Browning, Art’s wife, remembers a little playhouse that was at Recreation Park in about 1945. It was near the swimming pool and she wonders what happened to it. Sue is the little girl by the playhouse in this photograph. You can see the railroad tracks in the background near where the recreation building is today on Jacob Street. Anyone know where the playhouse went?

*** Melba Moss Bishop, a former Visalian, use to live with her grandmother, Ona Moss, in a little house in a little area called Ben Maddox Way Courts or Cabins. Melba is trying to find out where the “courts” or “cabins” area was. There was a little store in front with gas pumps and the cabins were placed in a circle.
***Thanks to all of you who passed along your combined high school graduation ceremony information. It was very helpful.
***The McDonald’s Café item in a past HH brought out lots of memories. The photograph of McDonald’s Café on Main brought out memories but the McDonald’s Drive-In at 110 No. Floral (Center and Floral) stirred some interest also. Sure like to see a picture of the drive-in.
***Norm Atkins did some detective work on the last HH photo of orange shaped Reed & Bell. He noted that on the Fox Theatre marquee it said Chester Morris & Virginia Grey. He found out that the movie was Thunder Afloat released in 1939. He concluded that because the Fox played first run movies, 1939 would be the date of the photograph. Good work, Norm.

With no new cases reported since Saturday, the poliomyelitis epidemic in Visalia appeared to be on the wane today. The fact that the outbreak is apparently under control is expected to result in the lifting of the ban on amusement centers, and it is reported that the city council may take action at a meeting to be held tomorrow night recommending that health authorities allow theatres, dance halls and other establishments to reopen after being closed for the past two weeks.  Visalia Times Delta August 26, 1935.
Posted at 6:28 PM No comments:
Email ThisBlogThis!Share to TwitterShare to FacebookShare to Pinterest
Newer Posts Older Posts Home
Subscribe to: Posts (Atom)