Click on photo for larger image
Thanks for visiting Historic Happenings! If you are not on the list, and would like to be notified via email when a new posting of this newsletter is made, please email Terry Ommen at histerry@comcast.net. I will add you to the list. I will never share your email address with anyone without your permission.

Congratulations go out to Jan Morrison for getting the last Mystery Spot correctly identified. She was the first. Many of you got it right, and of course it was the old Wilson Cyclery building at 115 No West Street. Nice work Jan.

Okay, are you ready for the next one? Identify this building. Here are your clues:

1)  This window is the only one on the entire wall.
2)  The building has a well-known name affixed to it.
3)  Ground was broken for this building the same year the Great Depression began.
4)  Many big name entertainers were seen here.
Good luck!

Donna Capron Wilson, granddaughter of former Visalia Police Chief James M. Fluty, recently visited and shared her family photos and history. Born in Missouri, Jim Fluty came to California in 1915, moved to Tulare County in 1920 and started with VPD in 1931. A master with firearms, he won many shooting matches and exhibitions. In 1939 he was named Visalia’s Chief of Police and served in that position until 1945 when he resigned to work with his brother in a family gun shop. In 1951, Tulare County Sheriff Sandy Robinson hired him and he served until 1961 leaving the sheriff’s office as a captain of the Criminal Division. TCSO Emergency Unit is shown with an unidentified man standing nearby in front of the SP Depot now SP Depot Restaurant. Jim Fluty died in 1963. These photographs are part of Donna’s collection and more will be shared in future postings of HH. Thanks so much Donna for your visit and for preserving our history.

Sweet Block – How Sweet It Was!

Chriss Courtney Laursen recently showed me this nice old panorama photograph and wanted me to share it with all of you. It is an amazing photograph, very large and pretty much covers the entire Sweet Store block (south side of Main between Church and Court streets.) To copy it, I had to photograph it in segments. It shows employees of S. Sweet company lined up on Main St with a banner that says, “S. Sweet Co. Annual Picnic Mooney Grove.” No date on it, but it appears to have been taken about 1923. No one was identified on the photo either. Glad you were willing to share Chriss. 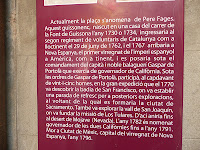 Judi Cowper recently returned from a visit to Spain. While there she visited the birth place of Pedro Fages, a Spanish soldier and early California leader. He is credited with being the first identifiable white man to see what is now called the San Joaquin Valley. In 1772 while looking over the valley, probably from Grapevine Canyon in the Ridge Route area, he noted the beautiful valley view. Fages was born in Guissona, Catalonia and Judi was kind enough to share her photographs of his birthplace. Thanks for thinking of us, Judi. 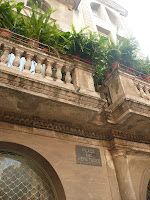 Virginia Flammang – She Shared History With Us
I had the pleasure of knowing and visiting with Virginia Flammang some time back. She was a very classy lady and a wonderful Visalia historian. She was born in 1921 and died in Visalia on October 25, 2012. She grew up in Visalia and not only did she live our history, she took notes. At her funeral some of her Visalia memories were read as part of the memorial service. Rob, Virginia’s son and Karen, Rob’s wife, shared copies of her written memories with me. Virginia’s recollections are so vivid and here are a couple of them:

First: “At Morgan’s Meat Market [probably at 121 W. Main], the butcher always gave me a frankfurter. That was where I saw my very first ceiling fan; I wished I could hang on it and spin around. Also, here was where I attempted to bite some frost off a pipe next to the cold counter; after much pain and yelling and crying, Dr. McSwain came down and melted my tongue loose.”

Here’s another: “In the 200 block of [south] Bridge St. just a block off Main, was a wonderful and special place called the Visalia Plunge. The pool was quite large with a small cement island off to one side, with a live oak tree in the center. Standing on the island, you could grab a large ring and swing across the pool on a wire from the tree to the other side, or drop off in the water midway. Of course the slide was great fun, as were the diving boards which I was never brave enough to try. On two sides there were sand areas to sun bathe and pretend to be at the beach and plenty of showers and dressing rooms, also a place to buy candy and cold drinks. The Red Cross gave swim lessons so I learned to swim very early. Mother could just leave us there for hours knowing we were safe and having fun.”

Thanks Rob and Karen for allowing us to share her memories. By the way, Virginia lived in the house shown here at 1845 So. Court Street for a very short time. It was built by Frank and Josephine Flammang in about 1924 and still stands.

On Friday evening, May 3, 1968, the 5-story Hotel Johnson, built in 1917, caught fire and was severely damaged to the point it eventually had to be demolished. Lloyd Trout shared this personal story about that fire: “My mother (Estelle Trout) lived in the hotel and was the night clerk on duty when the fire started. She called the fire department then made a quick exit as smoke bellowed down the stairway. We asked mother what valuables she might have lost and she said, ‘Oh, I didn’t really have much except my cash savings in a dresser drawer!’ The following day after the flames were extinguished my wife Vanabeth and I were talking to Fire Chief Roy Vogt and asked if any of mother’s personal effects on an upper floor might be salvageable. ‘Well, let’s go up there and see,’ Roy said. So the three of us climbed into the department’s “cherry picker” and were lifted up to her apartment’s corner south window. With Chief Roy leading the way we gingerly made our way inside to a ledge while looking all the way down to the ground floor. With smoke still drifting up, it was quite a site! Not to mentioned a little scary. We saw the dresser perched on what was left of the floor. Inching along and hanging on to Roy for dear life, we made it to the dresser. Opening drawers we found her cash carefully wrapped in a handkerchief. Thanks Roy?” Thank you Lloyd for sharing this interesting story.

***Gary Holder mentioned that a good source of local photographs is school yearbooks. Business sponsors of the yearbooks oftentimes included photographs of their location as part of their yearbook ad. Good tip Gary!

***On Monday evening, December 10, 2012 from 7:00-8:30, I will be talking about the book Wild Tulare County, Outlaws, Rogues and Rebels. It is part of the Visalia Times Delta and the 210 Café’s 210 Connect series. Attendance is free and books will be for sale with $5.00 from the sale of each book going to the 210. Photographs will be part of the presentation. Hope to see you there.

A young gentleman of our town was politely invited by a number of the citizens to absent himself from the village, with the request that he would not return. For fear that he would not take their kindly advice, he was accompanied some distance and left with the injunction that his face was not to be seen again in town. The community is well rid of this kind, and he will do well to obey the good advice so kindly given. Visalia Weekly Delta, November 26, 1859
Posted at 3:37 PM No comments:
Email ThisBlogThis!Share to TwitterShare to FacebookShare to Pinterest
Newer Posts Older Posts Home
Subscribe to: Posts (Atom)