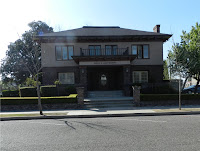 Congratulations to Steve Gerrard for his quick and accurate identification of the latest mystery spot. The mystery spot of course is the beautiful law office of Russ Hurley and Phil Laird. The old restored building and beautiful property at School and Floral streets once belonged to Dr. Combs and his wife Maude. Good work Steve, and again, congratulations.

Now for the new one. Here are the clues: 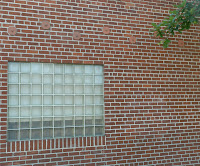 1.      This is not an ancient building
2.      At one time it housed a business machine store
3.      The building appears to have been built in the late 1940s
4.      This building is close to another building that is used frequently by those seeking information. As you can see, this novel building has glass blocks as part of its construction.
Where is this building? Good luck.

Visalia’s Mexican Concert Band
I recently received a great old photograph that belonged to Pat Finger, now deceased. Her daughter, Kathleen, found it with her mom’s things. The band members shown here are posing on the Tulare County Courthouse steps here in Visalia and are identified on the back. The leader of the band was Celso L. Rojas. Louis Salazar and Rojas would occasionally tour as solo musicians leaving the band in Visalia under the

control of Pedro Grajeda as the band leader. This photograph has conflicting dates of 1918 and 1912, but regardless, it’s an old timer. I do know the band existed as early as 1908. Thanks, Kathleen, for finding this great old photograph. So few pictures exist of Visalia’s Hispanic pioneers. Recognize anyone? Let me know if you do.

Remembering the Titantic—101 Years Ago
Even though the sinking of the Titanic had no connection to Visalia, the catastrophic incident was widely reported in the local newspaper. Dana Lubich reminded me that this month, April, 2013 is the 101st anniversary of the sinking and the loss of so many lives. Thanks, Dana, for not letting us forget this tragic event in history. 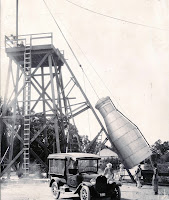 The Giant Milk Bottle – Hyde Ranch Dairy
Steve Blackwood recently shared a memory of the Hyde Ranch Dairy located near what is now the K-Mart Shopping Center. The ranch was known for the large 21’6” milk bottle (used as a water tank) mounted on a high tower. The bottle weighed slightly over 1 ton. The tower was 40’ high and the bottle was placed on it in about 1926. Steve reflected back to his youth and said, “Hyde Dairy was across the street from my house on Linda Vista. Spent many an afternoon walking through the alfalfa fields to unload trucks there. We used to climb the derrick to the big milk bottle they used as a water tower.” Steve, glad you survived the climbs. This photograph shows how the bottle was raised to the tower.

Bartell Todd Gave Visalia Gas
Another great old picture made it to me recently. Remember the Bartell Todd Texaco service station and garage (309 W. Main Street) across from the Fox Theatre? Bartell Todd bought the Featherstone Service Station in 1922 and turned it into a very well-known and popular spot. This 1929 photograph shows employees, some in uniform. The building on the far left with the “Nash” sign on it, still stands with Café 225 occupying part of it. The only person identified is Joe Angelastro, fifth from the left. Visalia’s downtown had many gas stations in its early days and now almost all are gone. The Bartell Todd building was replaced by Visalia’s new Sears building in about 1950. Thanks Sharon, for preserving this great old photograph and sharing it with us.

The 1945 Visalia Union High School Track Team
Recently, Harold Lee Edwards shared this beautiful old photograph showing the Visalia Union High School track team with the athletes identified. It is dated May 1945 and the picture was taken inside the “bowl” at the east end. I recognize so many names including Sam Sciacca, Bob Bricker, and others. If you see people you recognize,  please let me know and for sure let them know. Also let me know if you

are in here.  Anyone still have this “V” shirt complete with wings? Great looking track shirt. Please let me know if you have one.

Robbins Meant Music to Visalia
Moneka Simmons recently shared some of her Visalia memories. She mentioned one business that is not often mentioned…the Robbins Music Store. It was on Main Street next to the Bank of America building. It was started by Mr. and Mrs. J. E. Robbins in 1920. Over its long life it offered pianos, organs, phonographs, televisions, radios and appliances and sheet music for sale. Moneka recalls when it carried records as well. She said, “We loved that place back when I was a kid. We could go into the store and choose a 45-rpm record that we wanted to hear, then we could go into a glass booth and play it to decide if we wanted to buy it or not.” The photo shown here is the store at the time of the 1945 flood. Anyone know when Robbins’ closed?

***It was silenced and now we’re getting our voice back! Yes, the Valley Voice newspaper is starting up again with its first issue scheduled to be published in June. It is going to be published bi-monthly and be pretty much like the old VV. An interview with U. S. Congressman Devin Nunes will be featured in the first new issue. News and story ideas are welcome and encouraged and can be sent to Catherine or Joseph at news@ourvalleyvoice.com. Best of luck!

***Moneka Simmons shared another memory of Visalia. Not sure when this was, but it sure sounded like a dangerous Halloween. She said, “It was all out war on Main Street. Dirt clods, rotten eggs, tomatoes, you name it – a solid barrage of stuff being thrown at people walking and also cars cruising up and down Main. It was awesome until the ‘city fathers’ again got tired of cleaning up the mess up and down the street the next morning. I have heard that people came from San Francisco and other places to see it.” Wow!

***For a long time I have heard from many of you mentioning an organization called the Visalia Vapor Trailers. That hotrod organization dates back decades and many people were part of the group. Many still do belong. I also heard that a member of the group is writing the history of the organization and I am looking forward to reading it. Hope it comes out soon.

***Michelle Lang is an independent film producer who has announced a new film called “Lost on Purpose.” The story is based in and around Visalia  and here is an interesting and  short description of the film with the actors and the producer. http://www.kickstarter.com/projects/273375852/lost-on-purpose      Good luck to you Michelle and everyone involved.