Congratulations go to Lloyd Trout who was first to identify the last mystery spot as the Buddhist Church or Temple on Center Street just east of Santa Fe.  Nice work, Lloyd.

Now for the next one. Where is this building? Here are your clues:
1) The building is on the National Register of Historic Places.
2) It is a classical revival style building.
3) It has a granite block base.
4) It once stood on the site of the Bank of Visalia.

Where is it? Good luck!

Visalia's Gothic Catholic Church
Well, we are lucky enough to have another of Albert Stroben's photographs supplied by his son Tom. It shows an earlier St. Mary's Catholic Church sometime between 1910 when it was built and 1954 when it was replaced with the current  Catholic church.   According to Bill Allen who wrote the history of the Catholic church here in Visalia in his book called It Started in a Stable, this $12,000 church was adorned with beautiful stained glass windows and was built using gray cement blocks. The gothic style structure was designed by local architect Morve Weaver and built by local builder J. M. Nelson. This photo is unique in that it shows a view from a perspective not often seen with the convent in the background. Again thanks to the wonderful photography of Albert Stroben and to Tom for sharing it.

Estrada's Spanish Kitchen
Many of you have mentioned Estrada's Restaurant over the years and suggested I add something about it in HH. Dana Lubich recently (within the last few months) did an internet search and found that even though Visalia's Estrada's no longer exists, there are other Estrada restaurants that do exist or did in other towns. Some are or were connected to the Visalia Estrada family. Although the Estrada

family had their culinary start in other Visalia locations, their restaurant was popular at two locations within our town. The first well-known location opened at 414 W. Main Street  in 1924 in the remodeled Vucovich home. In about 1958 Estrada's moved to 1545 S. Mooney Blvd. By 1992 the famous Visalia restaurant closed its doors. The Estrada story in Visalia is an interesting one and goes far beyond restaurants. They have a connection to the Visalia Stock Saddle.

AARP and a 1966 Visalia High Prom
Dana Lubich brought this to my attention recently and he thought HH readers might enjoy it. I agree with him. This interesting article appeared in the May, 2014 issue of AARP magazine on page 42. The author of the article is Marian Adamson and she wrote about her and boyfriend Larry's experience at the 1966 Prom at an unnamed Visalia high school. I think it's worth a read. Thanks, Dana for sharing it.

Charles Hammer—Another  Important Visalian
Well, here is another picture that was tucked away in the Albert Stroben photo collection. This unidentified and undated picture shows who I believe to be  Charles J. Hammer, owner of Hammer Machinery Co. The well-respected native Visalian was a successful businessman and served on the city council and served as mayor for a time in the 1930s. He was tireless in his civic involvement and he had a special love for local rodeo. Thanks again Tom for sharing. By the way the calendar on the wall advertises the Visalia Lumber Company, but the date is unclear. For those who can positively identify Charles Hammer in this photo, please let me know. I'd like to verify what I believe to be true. 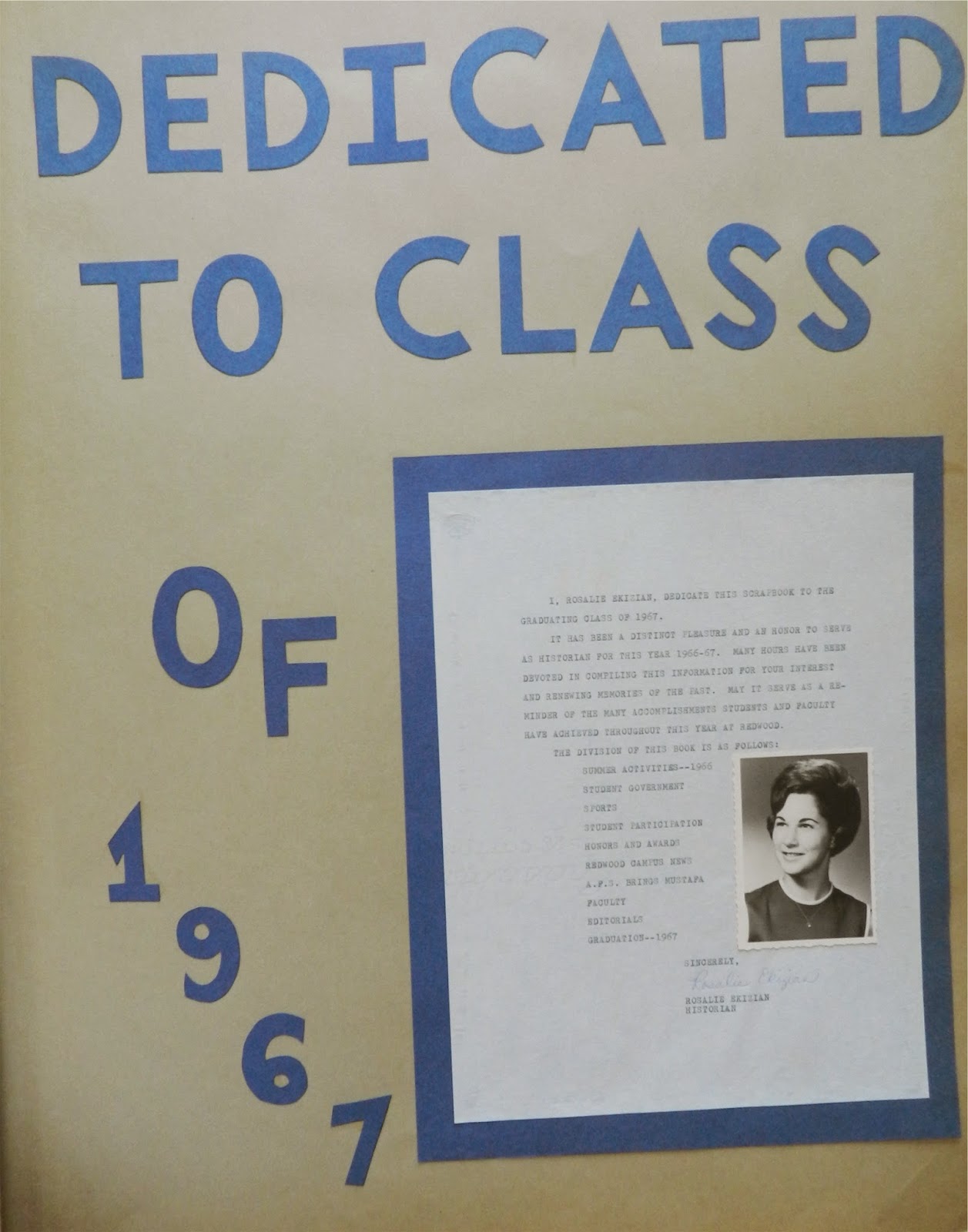 "trashing" of the scrapbooks and admitted he just could not let them be destroyed. He "saved" them and kept them for years trying to figure out what to do with them. He and I talked and he asked if I knew of a home for the books, so I contacted Sheryll Strachen, a Tulare County Library staff member who works in the history room, and she accepted the 15 or so scrapbooks for the history room collection. Sheryll loves local history so I knew

what her answer would be. They are now saved in the History Room. The year ranges are  from  the 1960s through some in the 1990s, with obviously a number of the years missing. Thanks Nick, for dumpster diving to save these important historical scrapbooks packed with Redwood history. Shown here is a sample of the scrapbooks. 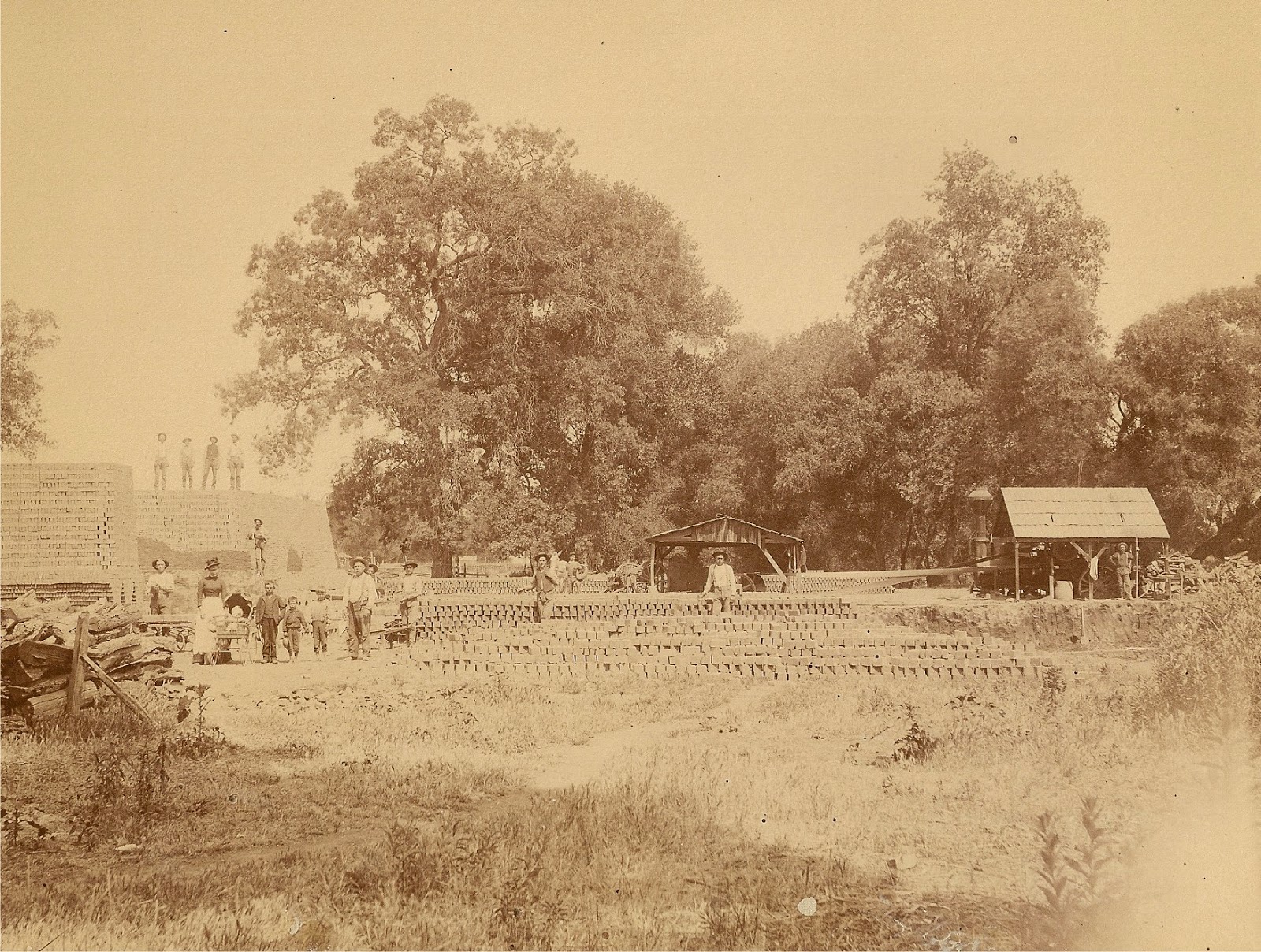 Etzenhauser Brickyard—Could It Be?
Ron Clevenger recently mentioned that in the 1960s he worked for Southern California Edison at the pole yard on Ben Maddox. He remembers while digging there with coworkers he found remnants of what he thought was a brickyard complete with kiln. Visalia had several brickyards in its history, and one in particular was in the area that he described. It was owned by a man named Etzenhauser and it was situated just east of Ben Madddox. Could Ron and his fellow workers have discovered what was left of Etzenhauser's Brickyard? This is a picture of the century-old brickyard in operation.

***Brian Blain asked about a farm "colony" near Farmersville. It was referenced with a November 1938 group photograph by the famous depression era photographer named Dorothea Lange. At the time the 500-acres farm was cooperatively run by about 10 families. The group farmed cotton, alfalfa and made dairy products. The group may have been called "Miner's Cooperative Farm." Has anyone ever heard of the colony?

***Dana Lubich reminds us that on June 24, 1983, nearly 31 years ago, the space shuttle Challenger landed at Edwards Air Force Base. Dana remembers that the Challenger's approach to the runway at Edwards was different on this mission in that as it approached the runway from the north, flying down the center of the San Joaquin Valley, it passed directly over Visalia and he remembers hearing  the "boom boom" here as it flew high above Bakersfield making its final approach to Edwards.

*** If you would like to know more about the historic Dudley House at Main and Giddings see the May, 2014 Lifestyle Magazine, page 18 or read it online at http://issuu.com/lifestylemagazine/docs/lifestyle_may14_web

Returned servicemen of this county were again entertained last evening at the "Welcome Home" dance given in their honor at the Municipal Auditorium. About 150 of the returned soldiers and sailors were in attendance and these together with a large number of local and out of town guests, spent the evening in the most enjoyable manner. It is estimated that about three hundred couples were on the floor at one time, this being the largest crowd of dancers with the exception of one other occasion, ever accommodated in the large auditorium.  Visalia Morning Delta, May 21, 1919
Posted at 9:15 PM 1 comment:
Email ThisBlogThis!Share to TwitterShare to FacebookShare to Pinterest
Newer Posts Older Posts Home
Subscribe to: Posts (Atom)