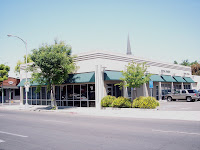 Art Browning correctly identified the last mystery spot as the old Purity Store building on the northeast corner of Center and Court streets. Congratulations, Art! This is two in a row for you.

Check out the new mystery spot. I don’t think you can miss this one. Here are the clues:
1) Julius Levy was an early founder of the organization that continues to occupy the building.
2) It was known as the Brown Building for many years because it was built by Samuel Carr Brown.
3) The building at one time housed the Model Department Store
4) The building had a serious fire in 1949.
Where is this building? Good luck!

Art Browning and Barbara Hinds Joseph both shared early recollections of old Visalia and both mentioned the early Kaweah Hospital. Barbara in fact was born there, and so was Pauline Crutts Bowers. Art recalls after it ceased being a hospital it was converted to an apartment building called the Victoria Apts. Art and his wife rented the old operating room after the Brownings were married in 1958. By the way, the old Kaweah Hospital served from 1921-1937 and its address was 415 W. School, where the Visalia Times Delta is now. Before becoming a hospital in 1921, it was owned by J. V. Garcia and some still refer to it as the Garcia Home. Before the Garcias, it was owned by Donald Malloch. In the last issue of HH, I mentioned that an HH follower asked about a photograph of Woolworths and Sam Goody, businesses in the old Visalia Fair Mall. I actually had a photo showing Woolworth’s located on the north side of the mall. Regarding Sam Goody, I’m told it was where Red Robin is now. I have found no exterior photographs, but here is an interior photo showing, on the left Karen Russell Kirkpatrick and on the right Ann Celery Hansen, both Sam Goody employees in the mid 1980s. Notice the shelves lined with music cassette tapes—almost all museum pieces now. Karen is a faithful HH follower and thanks for allowing me to share this photograph. One other historical point. Visalia Fair Mall reportedly was the first of the San Joaquin Valley’s air conditioned mall shopping centers. It was built in 1964.
Old Visalia Illustrated Map

Recently, native Visalian, Alan George gave me a copy of a historically illustrated map of Visalia. It is marked Visalians, Inc. 1992 on the lower right corner. Very nicely done with great artwork. Anyone know who did the artwork? Thanks Alan.

Interior Hotel Johnson—A Beauty on the Inside, too. 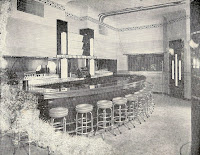 In the last HH, the Hotel Johnson was featured. In its heyday, it was a real beauty and James Hitchcock asked about interior photos. Here are a couple during its glory days in 1938. As mentioned before, it was located on the northeast corner of Main and Church streets and built in 1917. A fire destroyed it in 1968. By the way, Nancy Barnes mentioned that her aunt and uncle ate every lunch and dinner at the hotel for over 20 years. That’s pretty amazing!

***A couple of postings back of HH, I mentioned the “Blood Bucket.” HH follower George Reece recalls a bar near Linnell Camp unofficially called the “Blood Bucket.” He was a liquor control officer in the early 1950s and recalls the bar acquired the rather descriptive name Blood Bucket for obvious reasons.
***After several years of preliminary work, the Home Builders Tract of homes just north of Mt. Whitney is edging closer to historic status. The 100+ homes represent 1920s and 1930s architectural and deserve recognition as a historic district. The area lies between Watson and Conyer and Mineral King and Myrtle streets.
***Pauline Crutts Bowers would like to know if anyone knew any member of the Cigrand and Crutts families of Visalia. Let me know and I’ll pass along the information.
***Art Browning shared that he thought the Visalia Chicken Hawks team was a girls softball team. Any former Chicken Hawks out there?
***Erin Hayden believes Bing Crosby and Bob Hope, after a Visalia Country Club Golf Tournament, visited the Crowe’s.

Slowly he drives around the town
With his ill-smelling load,
And as he goes a trail of filth
Streaks and defiles the road.
A scene like this disturbs one’s nose
And aggravates one’s sight;
The city dads should make the chap
Pursue his rounds at night.
Visalia Daily Morning Delta, February 25, 1897
Posted at 7:48 AM No comments:
Email ThisBlogThis!Share to TwitterShare to FacebookShare to Pinterest

Good job Art! The last mystery spot was correctly identified as Pacific House on the northwest corner Church and Oak streets. Art Browning was the first to get it, but over 20 of you also identified it correctly. Now the next one is going to be a little harder. Here are the clues: 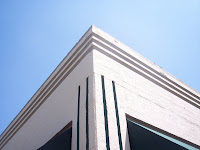 Johnson Hotel—One of the Finest 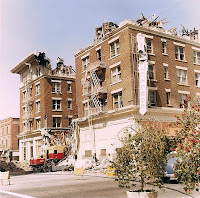 The 5-story Hotel Johnson was finished in 1917 and for many years it was considered one of the finest hotels in the San Joaquin Valley. It proudly stood on the northeast corner of Main and Church streets (where the Bank of America is now.) J. C. Hickman, as a Visalia Times Delta reporter went there often to attend service club meetings including Rotary. Many remember the beautiful old hotel. On May 3, 1968, a fire started in the building, probably from a guest smoking in bed, and J. C. Hickman covered the story. The building was not totally destroyed, but the age of the building and the damage made it an easy mark for the wrecking ball. By the way, the Hotel Johnson fire claimed two lives.

Visalia’s Night Hawks
Barb Armo, daughter of Jack and Lillie Armo, asked a question about what team her father might have played baseball for in the 1930s. According to my records, there were a number of teams during that period of time, some representing businesses and service clubs in town. But by far the most successful and popular of the teams was the Visalia Night Hawks. My guess is that Jack Armo played for the Night Hawks. The team was big in the 1930s and played other valley teams like the Hanford Kings, Porterville Reds and the Dinuba Sun Maids. The Night Hawks played at Recreation Park and the ticket price was ten cents per game. Can anyone help Barb in identifying the team that perhaps her father, Jack Armo, might have played for? By the way this team logo patch is believed to be from the Night Hawks, although it is possible that it represented the female team known as the Visalia Chicken Hawks. Does anyone know which team used this patch? It is a beauty!

Bing and Bob at Sequoia Field

Several postings ago in HH, the subject of Bing Crosby and Bob Hope coming to Sequoia Field was mentioned. There was good circumstantial evidence to suggest that it was true, but now we have what I believe to be, smoking gun evidence. This photo came to me from a credible source and on the back of the picture is written Sequoia Field 1941. Clearly it now appears that Bing and Bob did make their appearance at Sequoia Field. On a related subject, Leslie Caviglia, supplied this photo of Bing Crosby in 1975 showing her father-in-law James “Jim” Caviglia with Bing Crosby in one of the family’s orange groves. Bing came to the Caviglia orange grove to shoot a Florida Orange Juice commercial. Yes a Florida orange juice commercial and it raised some eyebrows among the neighboring Tulare County orange growers.

Mineral King Ave has its origin with the old mountain mining and resort area by the same name. As early as 1898 references were being made to the Mineral King road heading east out of town. When the town was first laid out, the street on the town’s south boundary was called South St. Later it was changed to Mineral King.

J. C. Hickman, a career newspaperman and former managing editor of the Visalia Times Delta, recently shared two important historical Visalia publications. One was a magazine called “Achievement Number” published by the Visalia Daily Times in 1914. It is packed with ads, photographs and stories. The magazine provides valuable insight into the life in Visalia almost 100 years ago. The second magazine called Sunset was a publication of the Southern Pacific Railroad Company and was published in 1904. Inside there is a 10-page article called “The Story of Visalia” with photographs. Both of these magazines are great resources. Thanks for sharing, J.C.

***In the January 26, 2011 posting of HH, a reader asked about a bar east of Visalia known as the “Blood Bucket.” Joseph Vicente did some checking and noticed in the October 19, 1946, Visalia Times Delta a reference to a “bloody bucket district.” It was just a passing reference and apparently was referring to an area east of Visalia. Not much, but a little something for those interested. Still no Blood Bucket.
***The Visalia United School District is asking the public for possible names for the new schools they will soon build. So far, two HH readers are suggesting the names Michael Mooney and another Ralph Moore. Both names are well-founded in Visalia history and both would be positive names for a Visalia school.
***The Southern Sierra Archaeology Society has asked if I would present a program on Fort Visalia. I agreed to do it and it is free and open to the public. The program will be at the Tulare County Office of Education building on Burrel in Visalia at 7:00pm on Tuesday, May 17, 2011
***Remember Woolworth’s and Sam Goody’s in the Visalia Fair Mall? Remember Gemco and Kay Bee Toys on Mooney Blvd. An HH reader would sure like to see a photo of these from that 1980s period.  Any pictures out there?

“There is no town in California that can compete with Visalia when it comes to graceful and accomplished lady dancers.”    Daily Morning Delta, September 17, 1896
Posted at 7:41 PM No comments:
Email ThisBlogThis!Share to TwitterShare to FacebookShare to Pinterest
Newer Posts Older Posts Home
Subscribe to: Posts (Atom)