Congratulations to Frank Pineda who was the first to 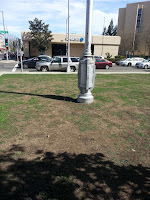 correctly identify the last mystery spot. It of course was the ornamental base to the U. S. Flag pole at the downtown post office on the east side. Nice work, Frank. By the way I’m not surprised he jumped right on this one as Frank is a retired postmaster in Visalia.

Now for the next one.  Here are your clues:
1. This feature was in downtown Visalia since at least 1936
2. It was connected to the Bonacich Family
3. This was part of a series of similar ones to serve as a convenience to downtown visitors.
4. This was restored in 2006.
What and where is it? 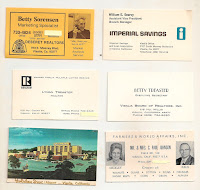 Businesses Come and Businesses Go
It’s amazing how fast time flies! Looking through a stack of old business cards sure gave me a sense of history for people and businesses. Here are just a few that I came across recently that are outdated now but might jog some memories for you. See anyone you know? If so, any stories about them that you can share? All of these cards pre-date the change from the 209 telephone area code to 559. I remember the discomfort people had when our area code change took place. Who could remember such an odd-ball prefix like 559? Does anyone remember what year that change took place? Note: I blocked out residence telephone numbers on some of these cards for privacy purposes.

Oh Those Childhood Pranks
A couple of HH followers supplied me with photographic examples of the pranks that young people got involved in not too many years ago. Marian Shippey Cote shared the photograph of her father, Chester Shippey standing guard at the outhouse that had been unlawfully deposited at the intersection of Church and Main streets on Halloween night in about 1950. Chester was a Tulare County 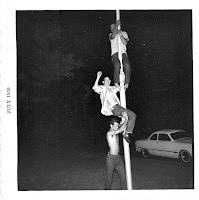 Deputy at one time and also worked security at various events. Okay, this is the time to come clean, so to speak, and “fess” up to placing this outhouse here. Come on, I know you’re out there. The second photograph came to me from Peggy Bragg. This shot caught these young guys scurrying up the flagpole at the Visalia library in 1959. Peggy snitched on her husband JM and she thinks he’s the one behind the camera. Thanks Peggy and Marian for giving us a flashback to a more innocent time. How about a photograph of 20 kids crammed into a telephone booth?

Joe Doctor Coming Back in Print

Alan George has wanted to honor Joe Doctor for a long time. Joe Exeter Sun, and thanks to him we have historical material that can’t be found anywhere else. The Tulare County Historical Society is moving forward on a project to gather some of Joe’s historical columns from the newspaper and publish them in a hardcover
commemorative book. His historical knowledge included much of Tulare County, but he did focus on Visalia history as well, so the book is sure to cover much material about our history. The project is just starting so we are not sure when the book will be done or released, but stay tuned.
passed away in 1995, but thanks to his many articles, he left us a treasure trove of historical material. A contemporary of Annie Mitchell, Joe wrote extensively (hundreds of articles) for the

Carrie Barnett—Her and the School Named in Her Honor 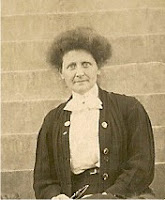 I recently heard from Dorothy Osborn and she reminisced about “the good old days” in Visalia. She attended Webster School and actually lived just two blocks from the school, and remembers how sad she was when it burned. She also remembered in about 1960, how the professional baseball players stayed at the Hotel Johnson and would “hang out” outside the  ho taught for 34 years in the classroom and was even a principal here. She died in 1922 at the age of 52. Her premature death shocked the community. When a new elementary school was built in 1923, because of her popularity, the school was named the Carrie Barnett School. The school, by the way, was demolished in 1967. Here is one of the very few pictures of Miss Barnett and one of the Carrie Barnett School. Thanks, Dorothy for sharing your memories.
hotel. Dorothy admitted that her and her girlfriends would “flirt” with them on occasion. She also mentioned Carrie Barnett School (1100 No. Court), so I thought I’d share a picture of it with you. The school was named after a remarkable teacher, by the same name

The Caldwell Family
Peggy and JM Bragg recently shared a couple of old documents they had collected. One of them, included here, is very old and
connected to the Visalia Caldwell family—the same family that is the namesake for Caldwell Ave. By the way the ranch house for the
Caldwell family stood near the intersection of Caldwell and 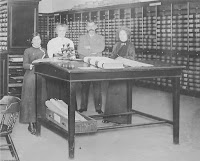 Mooney. Notice on this old receipt from Heald’s Business College (Fresno) that it was issued to Etta May Caldwell. I had a picture of Etta May (on the far left) in my files while she was working at the Tulare County Recorder’s Office. The man in this photo is Ira Chrisman, Tulare County Recorder. This photo was taken in 1912. Thanks Peggy and JM for sharing this nice old document.

***If you would like to know more about the history of the Mill site at Main and Santa Fe, pick up a copy of the March 2016 issue of Lifestyle magazine, and the story begins on page 12 or you can read it online at: https://issuu.com/lifestylemagazine/docs/lifestyle_1603_web

***If you would like to read more about some early auto racing on the streets of Visalia, pick up a copy of the April 2016 issue of Lifestyle magazine, and the article begins on page 12. You can also read it online at: https://issuu.com/lifestylemagazine/docs/lifestyle_1604_web

Tracheotomy—This difficult surgical operation was performed on Monday last by Drs. Benn and George upon the child of Wm. T. Cole, of Kings River, who had swallowed a grain of corn, which was successfully extracted. The corn had sprouted, having been nearly two weeks in the larynx. The child is doing well. Visalia Delta, March 6, 1867