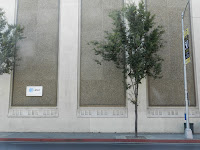 Congratulations Pete Cowper for being the first to identify the mystery spot as the telephone company building on Acequia just west of Locust. Nice work, Pete, with not much to go on. I would still like to know when this building was built. If anyone has a year I'd like know. 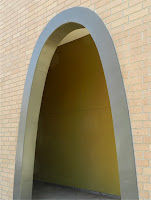 So, for those of you ready for the next mystery spot, here it is. Where is the building? Your clues are.
1. This building saw its share of conflict.
2. The building opened for business for the first time in 1965.
3. The building site was once the location of the Masonic hall.
4. The building is between an old hoosegow and a building
once owned by A. P. Giannini.
Good luck.

Visalia Underwater Again—1955
This is an interesting old photograph. I have never seen this particular view. Usually flood photos are taken

closer to the main part of downtown Visalia, but this was taken at the western end of Main Street. I would like to credit the photographer  of this photo, but it is hard to pin down. It was sent to me, but apparently it has been circulated in social media circles for quite some time. Notice the Juke Box fountain on the far right, a Richfield service station near the center and Stella's Italian Restaurant on the far left. Just so you can get your bearings, Stella's was at 614 W. Main Street. Floods sure brought out the cameras and thanks to the photographer of this picture. 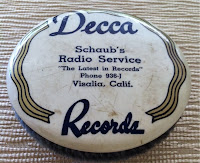 A Throwback to an Earlier Time

What is this? Susan Mangini has had this floating around her house for as long as she can remember. It advertises Schaub Radio Service at 108 S. Church Street. Do you give up on what this is? It is a record cleaner! You remember records, don't you? Anyone know anything about the Schaub Co. or family?

Dallas Pattee, Tulare County cemetery historian and an HH follower, made a request. She noticed that in the past we have highlighted "concrete artisans" like J. M. Nelson and wanted me to share some of the work of another artist named C. K. Ragan. He was a Visalia businessman, a monument man, a stone cutter and also an artist who often signed his work. The signed headstone shown here is in the Visalia Cemetery, and Dallas says his work can be found throughout the county. By the way, in 1877 the local Times newspaper reported: Artistic—We have noticed for several days in the show window of R. P. Grant on Main Street, a very handsome and artistic piece of marble carving, executed by Mr. C. K. Ragan, a very superior master of his calling. The work is a representation of a little child in a position as if praying, the hands clasped and eyes turned heavenward; there is not a flaw in the execution of it, and is worthy of the many compliments passed. Mr. Ragan may well feel proud of his genius in this line. Thanks Dallas.

Alan George shared this old relic of early Visalia with me. It's a bottle he has had for many years. It's a beauty and marked "E. L. Smith, Druggist, Visalia, Cal." In 1900 Ernest Smith and Frank Mixter bought this drug store in the Harrell Building (105 E. Main Street). They sold drugs and jewelry. Smith had just graduated from the College of Pharmacy in San Francisco in 1898. Later the business was sold and it became Switzer-McCormic Drug Co sometime before 1919. Thanks Alan, for sharing this nice old piece of Visalia history.

Cozy Court—A Visalia Sleeper
There are all sorts of interesting little residential gems hidden in Visalia. Here's one for you. Recently, I discovered that in 1929, Thomas Brown built these little "court apartments" for C. J. Boyd at 440 W. Race Street (between Floral and Willis). Collectively, these were called "Cozy Court." They remain standing after 84 years. Good construction there. Anyone know builder Brown or property owner Boyd?

***If you'd like to know more about Andrew Carnegie and the Carnegie Library that stood here in Visalia, check out the history article online in the September 2013 issue of Lifestyle magazine, beginning on page 20. Here is the web address:  http://issuu.com/lifestylemagazine/docs/lifestyle_sept_web

***Ann Moeai, who lived in Visalia from 1950 to 1969 shared an interesting story about the old Bank of America building and an experience she had there as a youngster. She writes, "My father Ted Cooper was not a bank employee but worked in an office on the 4th floor. I was with him one day on the elevator when the elevator attendant in uniform, or possibly a security officer with whom my father was acquainted, took us to the basement and showed us a room that had bales or boxes of money which I assumed to be old or torn bills. It was an interesting little tour, but as the years go by I have to wonder if I dreamed this or if it really could have happened." Anyone ever heard about boxes of money?

***Patsy remembers seeing statues on one of the islands at Mooney Grove Park. Anyone else remember them? What were they statues of? Any help would be appreciated.

***Earl McKee, a well-known and legendary Three Rivers native, has just written a book called Echoes of Blossom Peak: Cowboys, Horsemen and History of Three Rivers. It's a mountain history, a Three Rivers history, a cowboy history, and a Tulare County history, all in one book. Lots of references to Visalia here also. I strongly recommend it.

Drunken Officials—It is to be hoped that the time may come when sober men may be had to administer the law. We have lately had our attention called to the proceedings of an examining court where the court, the prosecuting attorney, and the prisoner at the bar were all apparently in the happy condition of a half-spent drunk. Such things are a disgrace to the community which tolerates them and are bound to call forth a complete ventilation if persisted in.  Visalia Weekly Delta, April 16, 1874
Posted at 7:30 PM 1 comment:
Email ThisBlogThis!Share to TwitterShare to FacebookShare to Pinterest
Newer Posts Older Posts Home
Subscribe to: Posts (Atom)