Thanks for visiting Historic Happenings! If you are not on the email list yet, and would like to be notified via email when a new posting of this newsletter is made, please email Terry Ommen at histerry@comcast.net. I will add you to the list. 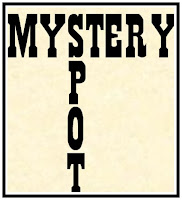 Sandy Newman was all over the last mystery spot; she got it quickly. She had photographed the tool impressions in the sidewalk years ago, so she knew right where to look. The location is in the sid 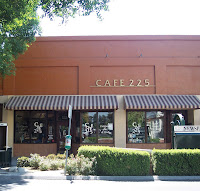 ewalk in front of Café 225. If you haven’t seen them go by and take a look. Good job Sandy, and thanks to Harvey Hosman for sharing this interesting sidewalk fossil exhibit with me years ago. By the way, J. M. Nelson was known as the “original sidewalk man” in Visalia. He did many sidewalks in the early 1900s. You can find his “signed” sidewalk work in several locations in Visalia.

Here’s A New One For You
For those of you who enjoy a little detective work, here’s one. This one stands out like a sore thumb. Nothi

ng secretive at all about this building. Obviously we know the building name, but do you know where it is? Here are some clues:
1) If you add the numbers of the address together they total 11.
2) In 1914, the Visalia Dailey Times reported, “New Apartment House is Open to the Public.”
3) It is between two eating establishments.
4) The street it is on was once known as Cottonwood.
Good luck.


Ralph Moore
On Tuesday morning I received several sad emails announcing the passing of Visalia’s beloved Ralph Moore. Even though his passing was inevitable, it is hard to imagine Visali 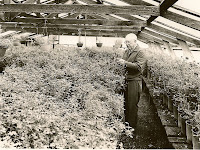 a without this gentle man. He was a very modest man, but it is difficult to imagine anyone more justified in boasting. He had done so much in his 102 years but I think for most people his shining accomplishment was his work with roses. Known throughout the world as the father of the miniature rose, he had created hundreds of new varieties. There is so much that can and should be said about this native Tulare County resident. Ralph’s Visalia roots run deep as he was related to the Reynolds family that settled here when the town first began. He is gone from our midst, but he left us with lots of remembrances of his passion and his life. 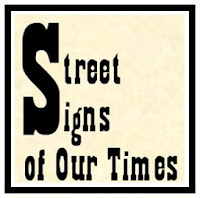 Caldwell Ave
For many years the road that is now Caldwell Ave was just a country road between Visalia and Tulare. In 1875, George and Matilda Caldwell lived and ranched in the area that is now the intersection of Caldwell and Mooney. For years that intersection was called “Caldwe

ll Corner” and the street was named for this early pioneering couple.

Buggy Step To Be Restored
Just a few weeks ago, Jay Belt offered up the buggy step on Court St. at NW 1st as a mystery spot. It wa

s a tough one and only a few of you got it. This relic of an earlier time is probably the only one remaining in Visalia. It would be a shame to let this one fall into total disrepair and crumble. Jay has agreed to lead an effort to get it restored. In doing so the buggy step will continue to be enjoyed by future generations of Visalians and visitors alike. We look forward seeing this wonderful piece of our history restored and enjoyed.


Visalia May Not Be the Oldest Town in the San J 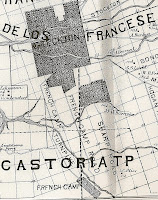 
Taylor’s Hotdogs – Yum! Yum!
A few days ago Terry Akers passed along that he had discovered some reviews on the internet of the historic Taylor’s Hotdog Stand. He suggested that if we go to Google, click on Google “Images” and ty

pe Historic Visalia, we will see many comments and reviews on Taylor’s Hotdog Stand and other historic Visalia photographs. Terry remembers going there as a young boy, but the hotdog stand was on the other corner at the time. Its original location was on the northwest corner of Encina and Center where the concrete pad can still be seen. It opened there in 1952 and moved to the northeast corner in 1984 when a new building was built. The original neon sign was kept and placed on the new building. The stand is still in the Taylor family and they are known for their special recipe chili dogs. Terry, thanks for reminding us of our famous hot dog stand.

Pat Hanson was kind enough to share a photo of his great-grandfather who lived in Visalia for some time in the early 1900s. Edwin A. Brown, born in 1846 in England, was a veteran of the Civil War and a member of the local Visalia chapter of the Grand Army of the Republic. According to family lore, Edwin ran away fro 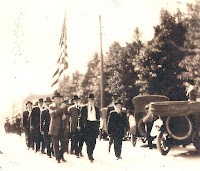 m his home in England and traveled to Philadelphia where he used a fictitious name and enlisted in Company A, 15th Regiment of the Pennsylvania Volunteer Cavalry. The portrait of Edwin shows him and his wife Emma and the other photo show the local members of the Grand Army of the Republic marching in a parade in Visalia. These photos are new ones, and thanks Pat for sharing them with us.

For many years buildings have used water tanks mounted on the roofs as a way to have water available for use in the case of fire. When Visalia’s Fox Theatre was completed in 1930 it was equipped with a 5,000 gallon water tank on the roof. That tank is still up there. (It sure doesn't look like a 5,000 gallon tank to me.) The 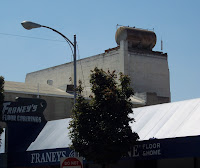 William Fox organization boasted that the gravity pressure of the water from the tank could “shoot a stream of water over the top of the county courthouse.” That building is now gone but was about the height of the old Bank of America building at Church and Main Street (now Bank of the Sierra.) That’s some pressure! By the way, if you don’t have the two Visalia’s Fabulous Fox Theatre history books, the Fox is offering them at a great price of $20.00 for both books. Call either Lance or Paul at (559) 625-1369.

** After reading about the origin of the name of Bardo Lane or Bardo Street in the last Historic Happenings, Jim Drath shared that as a 10-year old boy (in about 1954), he worked for Mrs. Wiley caring for her 15 acres of walnuts near Bardo and Walnut avenues. His job was to take care of her irrigation system. For spending an entire Saturday there he would earn $4.00.

** Remember the name L. Guggenhime? It’s the name painted on the building wall near Willis and School streets. Guggenhime apparently had a fairly deep involvement in Tulare County, as I came across his name recently on a list of investors in the Mineral King mountain road project in the 1870s.

** The Historic Visalia Postcards collection is doing well with over 150 packs already sold. If you don’t have yours yet, you’d better hurry. There are some left, but at this pace they won’t last long. Remember they are a limited edition and very fine quality. Also remember that the proceeds of the sale go towards a new series of 8 postcards. You can contact me at histerry@comcast.net if you need a set and we can arrange to get one or more to you.

"Tom Patterson, a Fresno thug lately convicted of robbery, was brought to the Visalia Jail on Monday morning last for safe keeping, the jail at Fresno being in course of repair. Patterson is the toughest looking customer ever jailed here, and to insure finding him when wanted an Oregon boot was placed on him." From Visalia’s Tulare Co. Times, February 16, 1888
Posted at 9:09 PM
Email ThisBlogThis!Share to TwitterShare to FacebookShare to Pinterest
Topics: Caldwell Ave, Historic Visalia Postcards, Mystery Spot, Ralph Moore, Taylor's Hotdogs, Visalia Fox Theatre