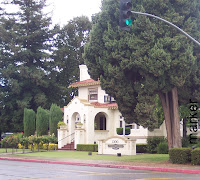 Well, congratulations go out to George Pilling who was the first to identify the location of the mystery spot marker. The marker with the metal base is located on the northwest corner of Giddings and Main streets, on the property of the old Dudley Mansion. The plaque identifies and commemorates the top bidders at the 1998, 1988, and 2000 Visalia Christmas Tree auction (YMCA). The pedestaled marker is in the flower bed near the intersection and can be seen in this picture on the far right.

Now for the new mystery spot. Here are the clues:
1)    This building had a new beginning in the 1972.
2)    Architect Ernest Kump designed the original building that was built in 1932.
3)    Early-on the building was connected to Visalia education.
4)    The building serves as a major gathering place for people today.
Good luck.

Well, it finally happened. The old Palace Hotel building was the first to receive a historic plaque in Visalia’s newly created Historic Recognition Program. The unveiling was witnessed by perhaps a hundred people or so. The big event took place on October 13, 2011 at 10:00am. The bronze marker was mounted on the west exterior wall (Court Street side) of the building located at the northeast corner of Court and Main streets. This plaquing program was kicked off thanks  to William Martin, the building owner, the Kaweah Kollectors, who funded the first and will be funding about a dozen plaques more, and the Visalia Historic Preservation Advisory Committee ( HPAC) who will oversee the program. I look forward to more plaquing of Visalia’s nice old structures. The program is a great way of teaching local history and creating more interest in Visalia’s vintage and flourishing downtown area. The photos are thanks to Dana Lubich who also found a website that shows interior pictures of Palace Hotel http://www.flickr.com/photos/darrenlee/sets/72157621825888725/
100+ Year Old Relic Found! 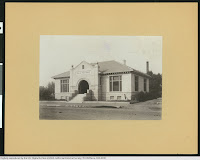 In 1904, Visalia’s Carnegie Library was built on the northeast corner of Main and Encina streets. It was called the Visalia Free Library and had that name etched in a granite block above the entrance to the building. In 1936 that library was replaced by the WPA library building that is now the children’s library near Encina and School streets. The old Carnegie Library building was then demolished. Recently, Patrick Barszcz reported that a part of that etched granite name block from the old Carnegie Library was found. The piece says “Free Library.” The block is without the word “Visalia”. That piece is missing. It sure would be nice to do something interesting with the Free Library piece. Any ideas? 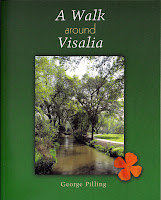 A Walk around Visalia
A new Visalia book has just been released! George Pilling called his publication A Walk around Visalia and it is now available for purchase. I have spent some time with it and am thoroughly enjoying it. I really like George’s approach in this book. It’s relaxing, almost “Mr. Rogers”-like and incorporates a nice blend of Visalia history and the current scene in our town. He describes several interesting Visalia walks that he maps out. The book is also packed with beautiful photographs. I encourage you to consider adding this one to your library. Christmas is coming up , too.  To order your copy, go to his website at www.georgepilling.com Thanks George for giving us a nice book.

It’s Called the Shippey House
Teresa Williams and Robert Beckett own the beautiful old home located on the northeast corner of Court St and Tulare Ave. After doing some research, Teresa discovered that the home was built in 1914. They would sure like to be considered for a building plaque. According to them, the house was built by Daniel Shippey and his son Alvin Shippey, therefore Teresa and Robert affectionately call their home Shippey House. You can visit their website at www.shippeyhouse.com. Good luck Robert and Teresa on your goal of getting a plaque.

Remember this landmark business on Mooney Blvd? Recently, Sandy Newman shared some photographs of this long-time Visalia business—all taken in November 1993, shortly before the building was demolished, I believe. The Estrada’s restaurant story is a real success story that at one time also had a presence in Fresno and Colma. The Estrada family ran the restaurant from its beginning. The Visalia restaurant was located at 414 W. Main Street for years. In about 1958, the operation was moved to this Mooney Blvd. location (1545 So. Mooney). Thanks Sandy for reminding us of this important Visalia family and their business.

***A number of you have personal knowledge of the old buildings that made up  Tarterville and provided nice tidbits of history. The structures were described as Quonset type buildings which meant they had curved metal roofs, similar to older military buildings. Thanks everyone for sharing their Tarterville stories.
***Sharon Logan Gregory mentioned Lindsay and Elaine Williams who she said owned the “Sin City” bar was at Main and Ben Maddox. For many years I have heard this bar mentioned, but I’ve never seen any photographs. Sin City apparently disappeared when Main Street was extended east of Ben Maddox. Can anyone provide photos or additional information on Sin City?
***Crop duster, Phil Kneeland, asked whether any aerial photographs of the Green Acres Airport (near Green Acres School) existed. I do not have any photographs of the old airport, but maybe you do? Please let me know if you have any and are willing to share.
***Jim Drath recently shared two old copies of the Visalia Daily Times from 1917. There are so many good stories about early Visalia inside, but one of special interest to me is the detailed article that discusses the possibility and desirability of creating a reservoir below Three Rivers for irrigation purposes. Thanks Jim for sharing.

Visalia, county seat of Tulare County, is one of the oldest as well as one of the prettiest and most prosperous cities of the San Joaquin Valley.  Fresno Morning Republican, June 22, 1919
Posted at 7:50 PM
Email ThisBlogThis!Share to TwitterShare to FacebookShare to Pinterest