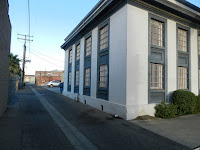 Tony Cornett was the first to identify the last mystery spot as a set of "bars"  of the old Tulare County Jail on the alley side.  Nice work, Tony, and I won't ask how you recognized it…especially so quickly. (Just kidding, of course.)

Here are the clues for the next mystery spot:
1) This building is made of adobe bricks.
2) It was built using all volunteer labor.
3) It was built in 1926.
4) Over 5,000 adobe bricks were made in three weeks to complete this building.
Where is it, and, no it is not a Spanish Mission?

many cowboys/vaqueros in the day, it was the saddle of choice when working cattle. People still use and collect them as important western keepsakes. Dorothy correctly pointed out that the Visalia shop was on Main Street and this photograph shows the saddle storefront that was near where Brewbakers is today on East Main. Thanks, Dorothy.

Sierra Vista—The $7.50 School Name
Bill Allen, a graduate of Sierra Vista School, recently shared some school history. The school building at Mineral King and Dollner (Home Builder's Tract) was a WPA (Works Progress Administration) project and it was finished in 1939 with Ernest Kump the architect. At the time, it was a 7-8th grade school and this graduation exercise program belonged to Bill. In fact, he is listed as

Billy Allen in the Honorable Mention section.  The ceremony was held on Thursday evening, June 8, 1944 at 7:30pm. Just 5 years earlier and shortly after it was finished, the school was given the name Sierra Vista. A name-the-school contest in August 1939 brought in dozens of possible names, but Mrs. T. B. Thompson living at 106 N Court submitted Sierra Vista and she won the grand prize of $7.50. Thanks for sharing…Billy (sorry I could not resist Bill)! 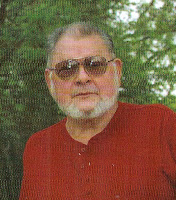 however, Monty Sands, a long time lawman and former Tulare County Deputy Sheriff under Sheriff Sandy Robinson, recalls a problem with the new building. He tells us, "When they moved from the old jail to the new one everyone was thrilled. It was suppose to be state of the art. It even had an indoor pistol range. One small problem soon became apparent. They had failed to install a ventilation system. After a few shots, the targets became invisible because of smoke. The room remained closed for years. It eventually was used for the crime lab and storage." Monty also shared that at the old jail sometimes crowds gathered outside the women's section as the women inmates would flash the crowd  through an open bar window.  By the way, Monty is a Tulare County native and worked as a peace officer with the Tulare County Sheriff's Department, the Visalia Police Department , Tulare County Probation Department, and Tulare County Lake patrol. He has authored 5 books—Murder in Matheny--the April Holly Story; Just a Few More Miles; The King of Nine-Mile Canyon, Welcome to Ocean's Mist; and In More Innocent Times. Thanks to him, some of our interesting county history has been recorded and published. Check them out on Amazon.  Thanks for all you've done, Monty.  (Thanks to Marian Shippey Cote, too, for this 1963 photograph of the jail.)

Christopher Evans – A Visalia Outlaw in Portland
Recently, my wife and I took a road trip to Oregon and stayed in Portland for a few days. When traveling I like to include the exploration of local Tulare County history connections when one exists. Well, Portland has a big Visalia/Tulare County connection. Christopher Evans, half of the outlaw team of 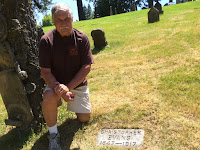 Evans and Sontag, is actually buried in Portland. After Evans served many years in California State Prison, he was allowed to be paroled to Portland, Oregon to live with family. By this time, Evans was a tired man with lots of physical problems including the loss of one arm and one eye. This photograph of the old outlaw was taken in 1916 in Los Angeles on a visit to see his daughter Eva. The following year he died in the City of Roses (Portland) and is buried at the Mt. Calvary Catholic Cemetery.

Floyd "Pappy" Depew—A Lawman From the Old School
There is a historic and legendary lawman in Visalia history who people talk to me about all the time. Floyd "Pappy" Depew was big in Visalia history, and physically big , too, standing 6 foot 2 inches! I was fortunate to have worked with Pappy in the last years he worked for VPD before his retirement. Pappy was born in Tulare County in 1909 and was officially hired by VPD in 1941. He witnessed the Hugh Garrison (first officer killed in the line

of duty) shooting in 1946. Floyd had a colorful career and he retired in 1974. Monty Sands who worked with Floyd, remembered Pappy as a police officer and said that Depew began his career when the "main requirement to be an officer was guts, size and strength." Fewer and fewer people remember him today, but those who do, talk about him with honor and respect. Was he polished and refined? No. No one would ever call him that. But everyone that knew him has a "Pappy" story they are willing to share. Rarely do you find a lawman so tough and so gentle at the same time. Rest in Peace Pappy!

***I received this request from Rosemary Dority Isbell:  "Am looking for relatives of the Florence Doe family. The Does were friends of my grandparents, John and Nina (Ninnettee) Huntley. I am interested in finding out if anyone has old letters or any information concerning them. Would enjoy hearing from anyone. Many thanks." Let me known and I'll connect you to Rosemary.

***If you'd like to read more about the Visalia and Tulare Railroad, please look at the Lifestyle Magazine June, 2015 issue beginning on page 14 or go to:   http://issuu.com/lifestylemagazine

A great deal has been said as to the general unhealthiness of Visalia the past winter. While there has undeniably been a great deal of sickness, and many deaths, yet, upon investigation and comparison this place has suffered no more than the country in general. It has been a very sickly year, so far, in other places as well as here. In San Francisco the death rate rose to double the usual number, and the type of diseases prevalent was about the same. Pneumonia and measles have run riot all over the State. In some places malignant scarlet fever and diphtheria have been superadded. In more distant parts, small-pox has been epidemic. On the whole there is no doubt but that Visalia is just about on a par with other localities. Visalia Weekly Delta, April 7, 1882
Posted at 4:27 PM
Email ThisBlogThis!Share to TwitterShare to FacebookShare to Pinterest