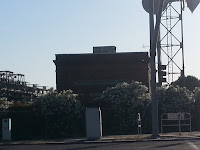 Well, congratulations go out to Steve Gerrard – that makes 2 in a row for him—for
correctly identifying the last mystery spot as the old Southern California Edison power building at the corner of Main Street near Ben Maddox. Nice work again, Steve. 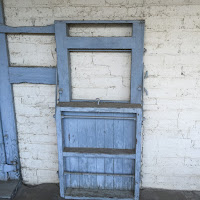 Now for the next one. By the way Kim Gunter, provided this mystery spot. Where is this feature? Here are the clues:
1)    This would have been a popular spot on a hot summer day.
2)      It was conveniently located near a major transportation route not functioning today.
3)      The product that was once sold here is certainly taken for granted these days.
4)     A variety of people work here now and there is regular turnover.
Good luck!

Tokens—They Enticed You to Return
My good friend Alan George recently shared a couple of Visalia tokens with me. Tokens were a merchant’s way of getting you to come back to their business and buy more product. In a way it was what we would call a loyalty program today. A merchant would hand out “good for” tokens to customers offering them a discount

or free merchandise on their next visit. It was reward for old customers and provided incentives for new ones to come to your business. The White Fawn was a saloon at 207 E. Main Street and this token, upon presentation, earned you 25 cents in trade. The other token shown here was for 12 ½ cent cigar at The Stag. Sweeney and Necklaussen (notice S & N on token) owned the saloon. Thanks Alan for sharing these wonderful relics with us.

Images of America—Visalia Book Now Available
For the past year and a half I have been compiling old Visalia photographs, some of which were generously provided by some of you,  for a book. This is another Arcadia book which happens to be the second one I have done for this publishing company. The current book which  was just released a couple of days ago is part of a series they call Images of America. The publisher will be placing the book at local outlets, but I have not heard yet where they will be offered locally. Amazon has them too. The book is a historical photograph book and features on the cover a picture of the Visalia Electric train in front of the old county jail on Oak Street. The Arcadia series is nice for anyone interested in old photographs of towns. It can be enjoyed straight through or glanced at with interruptions. Not a lot of text, so you don’t have to read very much, but I have included very good historical information in the captions. If you would like to purchase a copy and can’t find it locally, call me at (559) 901-3227 or email me at histerry@comcast.net and I will make sure you get access to a copy.

David L. Smith is a local architect and pencil portraiture artist in Visalia and is he good! Recently he created a set of 4 note cards, each one drawn by him capturing an iconic Visalia landmark. The End of the Trail, the COS Giant, the Fox Theatre, and the former Mearle’s Drive-In, make up the four card set. His detail is amazing. For example, take a look at the Fox Theatre note card—he has even drawn the individual
ceramic tiles below the theater ticket windows. He is making these available to all of us and envelopes are also included. Printed on heavy white cardstock, the cards are top quality and perfect for sending a personal message to an old friend the old fashion way. Drop by his office at 303 No. Church Street in Visalia or make arrangements with him by telephone (559) 733-7833 to get a set or two. Perfect, too, for art collectors and Christmas stocking stuffers.

Laura Heberling recently shared with me some photos from her family scrapbook, and boy are they beauties. In mid 1916 the border with Mexico was a “hot” spot with Pancho Villa working it over pretty good. The United States was worried that the Mexican Revolution was going to spill over into the United States, so US troops were sent to the border including Visalia’s Company “D” 2nd Infantry Regiment of the California National Guard. On June 23rd of that year, about 100 Visalia national guardsmen boarded the train on Oak Street bound for their assigned border area near Nogales, Arizona. While the troops were in the field Visalia’s well-wishers found an abandoned bear cub in Giant Forest and shipped him down to them to keep the troops company. The little bear was a big hit and quickly became the company mascot. They named him Phil-Bear, and he was treated like royalty. Here Marvin Heberling, one of Visalia’s guardsmen, is shown holding him. Laura, thanks for keeping the family photos in such nice condition and thanks for sharing them with us. The other photo shows the troops in Visalia boarding the train with a huge sendoff. 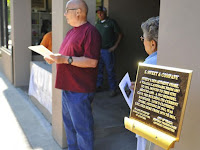 Sweet Building—Remodel and Recognition
Visalia’s Sweet building has been around a long time and stands as a constant reminder of the importance of the Sweet family in Visalia history. At one time the big Sweet building housed one of the largest, if not the largest department stores in Tulare County. The Sweet family later closed the store and sold the building. It was divided into three buildings and Links Clothing store occupied one portion. In the last couple of years Links closed and their portion of the building was sold to Sam and Marlene Sciacca. They have transformed it into a modern and 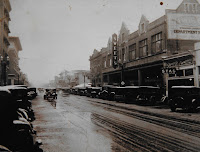 luxurious apartment building utilizing the upper floors as well as the ground floor. Now the Visalia Kaweah Kollectors created a bronze plaque to place on the building recognizing the building’s history. It is part of the City of Visalia’s Historic Recognition Program, and it will be mounted soon. Thanks to the Visalia Times-Delta for covering the event, and appreciation goes out to Mike Alvarez, the photographer and Luis Hernandez, the reporter.

Buena Vista Grocery—A Rare Photograph
For a long time I have enjoyed and appreciated the era of the neighborhood market. Visalia had plenty of them sprinkled around residential neighborhood. They carried minimal groceries, lots of staples and had candy and ice cream bars for neighborhood kids to buy. Some even had pickle barrels where you could get a big dill pickle for a nickel. Many of them have disappeared from neighborhoods over the years forcing shoppers to go to the big supermarkets. Lucy Perez Stump, who I have known for many years, grew up in a family that owned and operated a neighborhood store in Visalia—Buena Vista Grocery. It was opened by her parents, Antonio and Alvina Perez at 117 E. Buena Vista in about 1937 and it stayed in the Perez family until it closed in about 1990. Lucy and her siblings worked there after school. Lucy shared this photograph of the store, and I think it is a rare one. Does anyone else have a photograph of a Visalia neighborhood market? Thanks a lot Lucy. 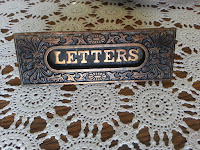 A Piece of the Old Tulare County Courthouse

Construction of the fancy Tulare County Courthouse in Visalia began in 1876 and was finished in 1877. It was built in Courthouse Square which is located on Court Street between Center and Oak streets. After the turn of the century, additional courthouse space was needed so they added north and south wings to the original building. In 1952 the big Tehachapi earthquake shook the old building and shut it down. It was red tagged as too dangerous to occupy. A few years later, the old timer was demolished. Some relics of the building were saved, like the redwood carving of Minerva, the goddess of wisdom which sat at the very top of the building. Minerva is at the Tulare County Museum. Many years ago, Annie Mitchell gave me another saved piece of the old building. This salvaged mail slot hardware had been given to her by probably someone in the demolition crew. The salvager etched on the back of the mail slot some important information about it. In her later years, she gave it to me as a keepsake and I have cherished it ever since.

***Not too long ago Bob Stewart contacted me and said he had an old milk bottle with Visalia California embossed on it, but he also said it had the letters MCDA. He is curious as to what those initials stood for. Does anyone know? A guess on my part says it stands for _____?________ Cooperative Dairy Association, but again only a guess.

***Recently, Joseph Vicenti while walking downtown spotted a small bronze or brass plaque embedded in the sidewalk. It is only about 3” x 5” in overall size and it has printed on it: Erdman Madison, Wisconsin. Does anyone know anything about the plaque or that name?

***If you’d like to read about Visalia’s “taming” Mill Creek take a look at the June 2016 issue of Lifestyle Magazine beginning on page 12 or you can read it online at https://issuu.com/lifestylemagazine/docs/lifestyle_1606_web

The oil sprinkler or sprayer, which is being operated on the streets in Visalia at present, is doing what appears to be splendid work. The oil is sprayed on to the streets, while highly heated, and as a result it dries into the dust very rapidly, and a buggy driving directly behind the sprayer, will pick up scarcely any of the oiled dust at all. Under the old plan, the oil was put on in large quantities, formed in puddles and stuck to the wheels of passing vehicles and the shoes of pedestrians for a week afterwards. Daily Visalia Delta, March 22, 1908
Posted at 4:17 PM
Email ThisBlogThis!Share to TwitterShare to FacebookShare to Pinterest