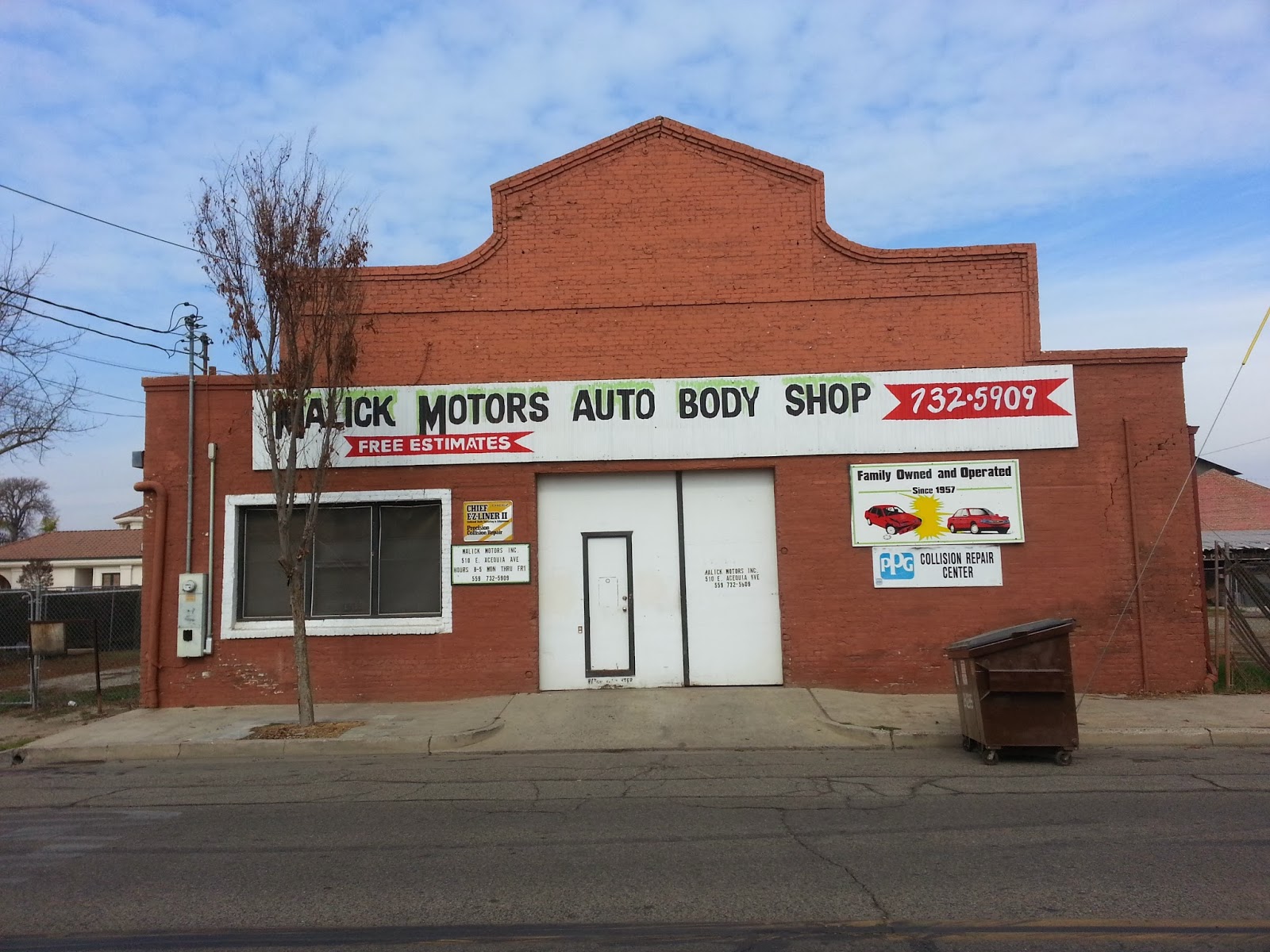 Congratulations go out to Virginia Strawser. She was the first to correctly identify the latest Mystery Spot as the Malick Motors building at 510 E Acequia Street, now vacant. The length of the old brick building  runs from Acequia to Main Street. Again congratulations, Virginia, and thanks to all who got it right or made a stab at it.

Now for the next Mystery Spot. Where is this building? For those that like the challenge, here are the clues:
1) The building celebrated its open house in 1941.
2) It was built by the City of Visalia probably with federal funds.
3) When it was built it contained about 3,000 square feet of interior space and was used to help people find jobs.
4) When built it stood at an intersection with North Street.

Atchison, Topeka and the Santa Fe Depot
Historically, Visalia was not a stranger to railroads. Although the Southern Pacific seems to get most of the railroad attention, the Santa Fe played a big part in the development and life of the town. Bruce Geiger was going through his grandfather's (Edwin Geiger) photo collection and came upon these two great old negatives. Both show the Santa Fe Depot which stood on the southwest corner of Main and Santa Fe. The first picture shows the railroad depot probably in the 1930s and 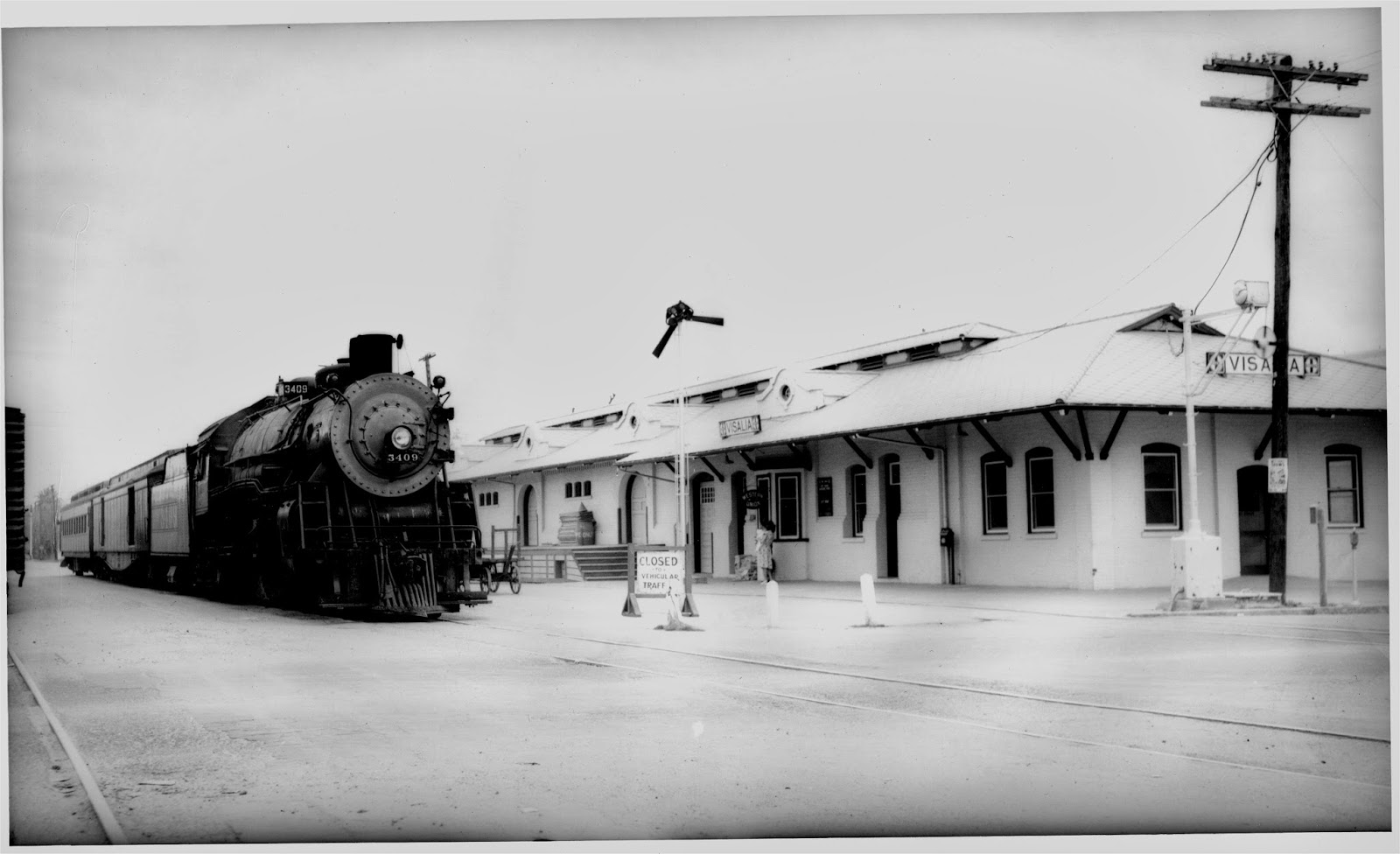 the second shows the old depot in March of 1948. Love the old locomotive in this one, too. The old depot stood in Visalia for many years and was torn down in about 1968 or 1969. Thanks Bruce for sharing your grandfather's great old pictures. 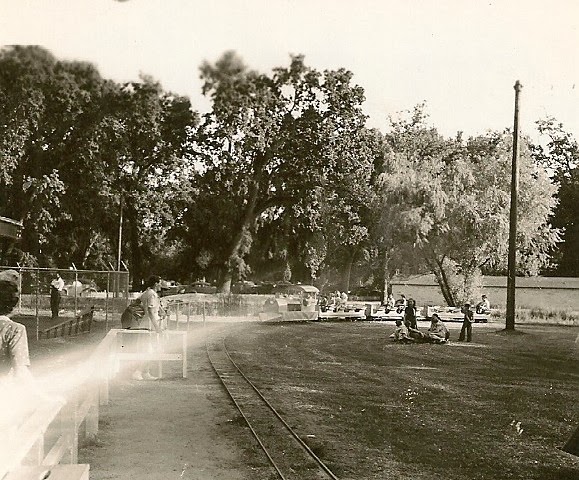 The Mooney Grove Railroad
Recently Margaret Schultz shared a number of photographs from her father's collection. Her father was Albert Stroben. Many of the pictures were obvious as to subject matter or in some cases had identification on the back, but some did not. These two were unidentified, but they appeared to clearly show the amusement park train at Mooney Grove Park. I checked Bill Allen's book Mooney's Oak Grove and sure enough the train was part of

the Mooney Grove amusement park. Was this train just for children? Sure looks like some big kids on board the train. Margaret,  again, many thanks for your generosity in sharing your father's pictures and thanks Tom for your help in identification.

Sierra Ballroom on Bridge Street
In the last Historic Happenings,  a Sierra Plunge photograph was shown        ( also taken by Albert Stroben ) for identification, and believe me, many of you spoke loud and clear confirming that  it was the Sierra Plunge. Located just to the south of the pool was  the Sierra Ballroom.  This old dancehall played an important part in the lives of many people. The plunge and dancehall were on the eastside of Bridge Street between Acequia and Willow. The plunge is gone, but the dancehall/ballroom building is still standing and is now an auto parts store. Some years ago, the owner gave me a tour of the old building  and I saw some of the perimeter bench seating still in place  along the interior walls. Recently, having toured it again, I noticed

virtually all evidence that it was a  ballroom is gone. This interior shot shows the existing employee break room on the right hand side of the picture and I'm wondering if that by any chance it was the  ballroom or a dancehall concession stand back in the day. Does anyone know? Does anyone have an old exterior ballroom photograph?

Prior to home delivery, mail recipients had to go to the post office and pick up their letters and packages. The use of post office boxes was common. After home delivery began and mail routes were started, postal employees walked their routes and used buggies and wagons to carrying the mail. James E. Wright, a mail carrier in Visalia for many years, is shown here standing by an early delivery wagon. The location of this photograph has not been identified. Thanks Gary Wright, grandson of James Wright, for sharing these nice old photographs. The dapper James Wright is shown here in 1898.

Thrifty Drug at Court and Main
Tony Cornett came across this photograph of Visalia's famed Thrifty Drug Store. It was located on the northwest corner of Main and Court streets. Looks to me to be about 1970 era, but could be late 1960s. The building now has Starbucks directly in the corner of this structure. I have memories of this drug store and remember the cheap (inexpensive) ice cream cones. (Do I remember 5 and 10 cents each?) I also remember the special scooper they used to extract the ice cream from the tub to make the cone. This special scoop was designed I guess to consistently measure the size of the scoop. As an historical note, this famous corner had a drugstore on the site for over 100 years. At one time it was called the Visalia Drug Store and was known as "the corner drug store." One more thing, did I remember a "tube tester" machine in Thrifty? Seems like I do. Thanks, Tony for the nice photograph.

***Wow, did the verification flood gates open up on the "plunge" photo. So many of you confirmed the photo as actually Visalia's plunge and I thank you for that. Many of you also shared your stories about the famous swimming pool. Thanks to all of you for your input. A special thanks goes to George Reece who sent a 1939 Times-Delta article about the former plunge and also to Carole Mathewson who freely shared  her memories. Lynne Brumit made an interesting observation about the plunge. She said "that in the late '30s or '40s it was thought polio and swimming water were connected (perhaps because it seemed there were more polio outbreaks in the summer.) So they put so much chlorine in the plunge pool you could smell it for blocks around."

***Well, J. C. Hickman, former Visalia Times-Delta reporter and managing editor, shared some information he found on the mysterious statue located on the island in the pond at Mooney Grove Park. J. C. said he had never heard the story of drowned children connected to the statue, but he does recall that the statue was of two children and was entitled "Knowledge and Wisdom." This statue was mentioned in Dean Krakel's book End of the Trail, and although no verification is possible, could it be that  the statue was also part of the Pan Pacific Expo in 1915 like the Pioneer and the End of the Trail? Viola Vollmer is quoted in Krakel's  book and she makes no reference to the statue representing two drowned children, but she does identify it as being the statue of Knowledge and Wisdom. Thanks J. C. for your good detective work and being an HH follower.

***Erick Broyles wonders if the legendary Tulare County "hanging tree" may be the oak tree on which the body of John Wood  was hung  in 1850 at the time of  the so called "Wood's massacre." The story of a hanging tree has been around along time. Could this be the  hanging tree?  Quien sabe?

***Anne Brazil is trying to find a picture of Hipwell's Market, a Visalia grocery store in the mid-1940s. It was located near Bridge and Tulare streets. Can anyone help with a photograph?

***Pat Haddock is looking for a photo and/or information of the Mt. Whitney High School Band and their trip to Disneyland. She is specifically looking for band or trip photos that were taken in the latter part of 1955 or mid 1956. Can anyone help?

James J. Kennedy, 21, said by police to have passed at least $15 in counterfeit half dollars to Visalia merchants since last night, was taken into custody by Chief of Police Harold Hicks shortly after 11 o'clock this morning near the Santa Fe depot, where he had been inquiring about a train to Lindsay.  Visalia Times Delta, February 17, 1938
Posted at 9:39 AM
Email ThisBlogThis!Share to TwitterShare to FacebookShare to Pinterest