Well, the last mystery spot proved to be a very difficult one. Very few were able to get this spot correctly located. Marian Shippey Cote was the first to correctly identify the old employment office at the northeast corner of Garden and Murray streets. Good job, Marian, on a very tough one.

Where is this building? Good luck! 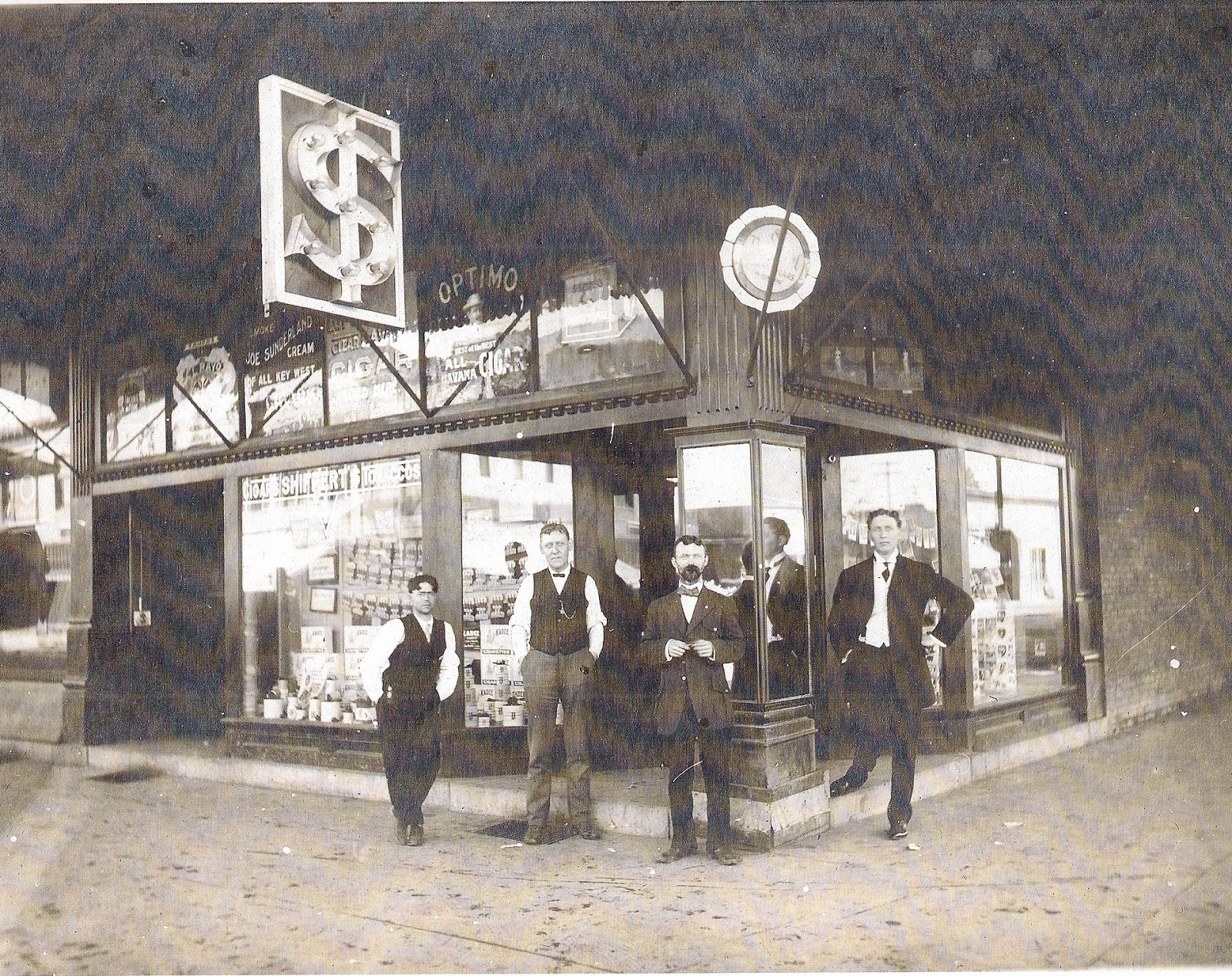 Shiffert's—A Visalia Seegar Store
Bruce Geiger recently mentioned Shiffert's Cigar store to me and it was a good time to highlight this long-term historic business. Irvin Shiffert founded the cigar company in 1898 on N. Court Street in the Palace Hotel annex building. A short time later, he moved it to 204 W. Main and then to the southeast corner of Court and Main. He employed 7-9 makers at one time. In 1939 Shiffert's moved again, and discontinued cigar making. I believe Shiffert's is still conducting business, however I don't know

that for sure. The last I knew it was a wholesale distribution company offering a wide range of products. The sign on this old photo shows the logo for the company. Many people think it is strictly a dollar sign. It may have been, but it had a double meaning. Irvin Shiffert is the founder and the one with facial hair in the photo, a photo taken at his Main and Court location. His initials are "I S" which would be the double meaning of the sign. The other photograph shows Shiffert and workers in the cigar making room.

Butterfield Plaque—Something is Missing!
In 1973 the Jim Savage Chapter # 1852 of E. Clampus Vitus placed a Butterfield Overland Mail marker on Visalia's Main Street in front of the old Togni-Branch store. The bronze marker described the inaugural trip of the famed stage line and highlighted Visalia's role in the old transportation route. The marker was placed on a granite boulder and next to the rectangular one was another marker—an illustration showing  the stage in action. The illustration as you can see shows a stagecoach being pulled by a team of horses. In the last few years, this illustrated marker was apparently stolen. Now the Tulare County chapter of E. Clampus Vitus, the Dr. Samuel Gregg George Chapter

# 1855 is working with Jim Savage chapter to get this illustration plaque replaced. I think the person who took the marker was looking, not for recycling material, but a collector’s item or souvenir. If scrap value recycling was the motive, why not take the larger plaque weighing a lot more?  That’s my theory and with that in mind, by chance does anyone know the whereabouts of the illustration plaque. I know it's a long shot, but perhaps someone will recognize it after seeing this photo. Pete Cowper, an HH follower and a clamper, is working to make this replacement happen.

More About Mooney's Grove
In the last HH, discussion about Mooney Grove Park brought back many memories

for so many. So I need to highlight it again. Pete Cowper remembers as a boy, his neighbor Harry Wilson, worked on the Mooney Grove locomotive engine. Pete also shared his mother's photograph of the "tunnel" that many of you remember. Jan Morrison remembered the tunnel, too, and she also shared the close 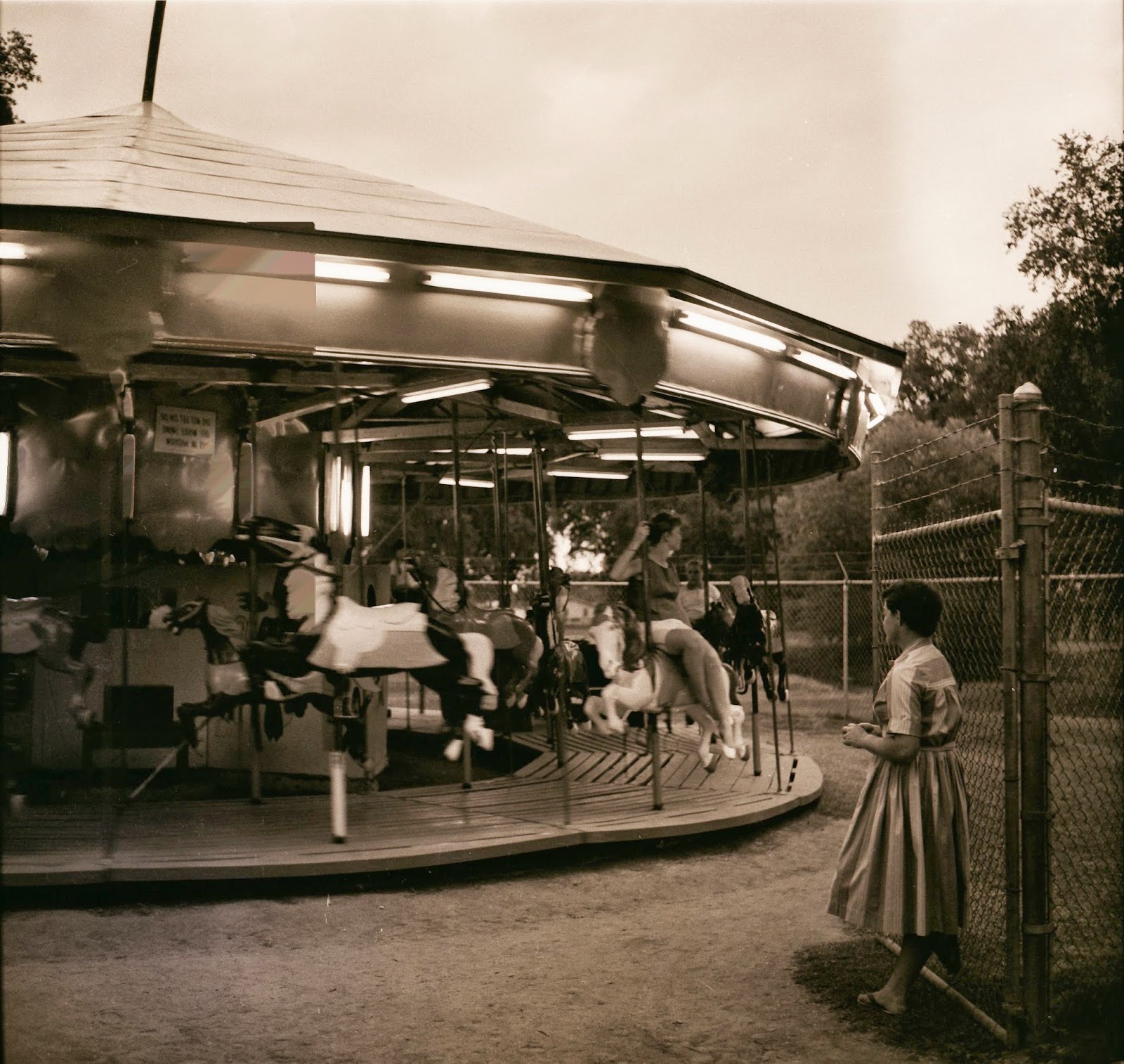 up of the old locomotive. By the way, Jan Andrews provided a glimpse of the great old carousel that was once part of the amusement area at the park. It is now in the city of Hanford.

Visalia Appears in Old Happy Birthday Card
HH follower and historian Dallas Pattee, recently found this unused "Happy Birthday" card in a thrift store. It is interesting in a number of ways. It is a collage of nostalgic memorabilia that caught her eye, and as she examined it closely, she found in the lower left an image of the Visalia Palace Hotel's letterhead. The card was printed for Marcel Schurman Co. and the card is

dated 1989. Marcel apparently lived in Fairfield, California. The card credits the layout and photography to Rose Hodges. Just goes to show that Visalia does pop up from time to time in all sorts of places. Does anyone know if this is merely a random mention of Visalia, or is there a Visalia connection to either the company or the artist? Thanks for sharing, Dallas. You have the eye of an eagle! 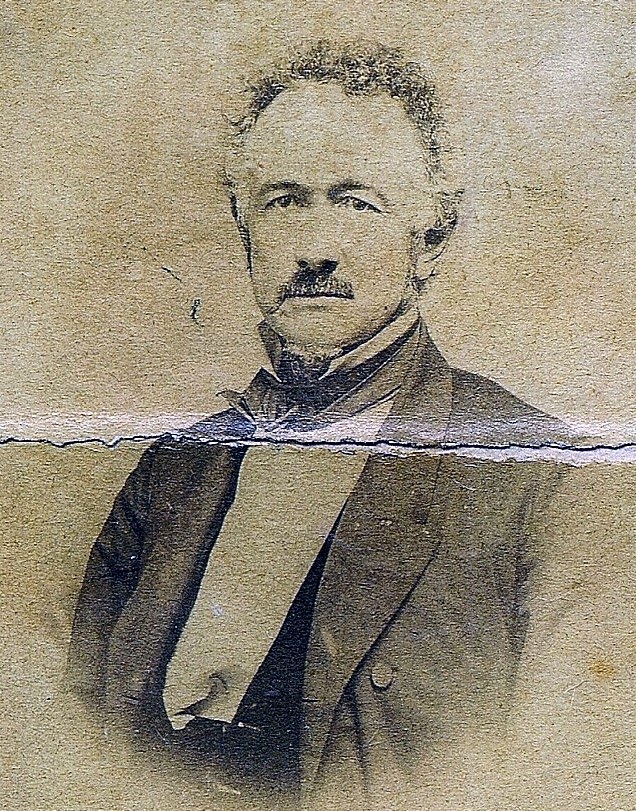 David R. Douglass—A Generous Man
I've been trying for some time to share a photograph that I received from Debbie Hopkins. She was kind enough to give me a copy of it and I want to share it with you. It's a photo of David R. Douglass, an important man in Visalia's past. Born in New York in 1814, Douglass lived for a time in Chihuahua, Mexico and actually lived there during the Mexican war with the United States. In 1857 he came to Visalia, established a business and became heavily involved in civic affairs. He helped organize

the Visalia Fire Department and donated the land where the first fire department building stood. This building was at the southeast corner of Church and Acequia streets, now part of the courtyard area of the convention center. Close to this building was a huge eucalyptus tree known as the "Douglass Tree" planted by the Douglass family. It is now gone from the convention center grounds, as is this old building, but there is a marker pointing out where the tree stood.

***The Sierra Ballroom brought back memories for lots of people. Lynne Brumit recalled in the mid-1940s, Visalia's seventh and eighth graders would go to the ballroom for Friday night dance lessons. Students learned formality and the etiquette of dance and afterwards many of them walked to Peden's on Main for ice cream. Those were the gold old days for many. By the way the Sierra Ballroom closed its doors in 1948.

***Floyd Fagundes has asked a question about a magic shop in downtown Visalia in the 1940s or possibly 1950s. He thinks it might have been called Ricardo's but he's not sure.  Does anyone have any information about the magic shop?

***Although not necessarily connected to Visalia, the question came up from a man in Florida who asked about a killing in Tulare County in about 1902. The alleged murder victim was Eddie Mort, who was a rancher in Tulare County. Sound familiar to anyone?

***If you would like to know more about the Mt. Whitney Power and Electric Co. and its connection to Visalia, go to the March 2014 Lifestyle Magazine and turn to page 18.. You can also visit it online at the following link, beginning on page 18 http://issuu.com/lifestylemagazine/docs/lifestyle_mar14_web

The Colored Baptist church of Visalia will present a program at the Methodist church tomorrow at 7:30 p.m., and included on the program will be Mrs. Sarah Wilson of Visalia, who will tell of her experiences as a slave prior to the Civil War. Visalia Times Delta, February 15, 1941
Posted at 5:49 PM
Email ThisBlogThis!Share to TwitterShare to FacebookShare to Pinterest